WORLD As workers miss paychecks, shutdown set to hit record length in US

As workers miss paychecks, shutdown set to hit record length in US

The partial government shutdown was on track Friday to become the longest closure in U.S. history as President Donald Trump and nervous Republicans scrambled to find a way out of the mess. A solution couldn't come soon enough for federal workers who got pay statements Friday but no pay. 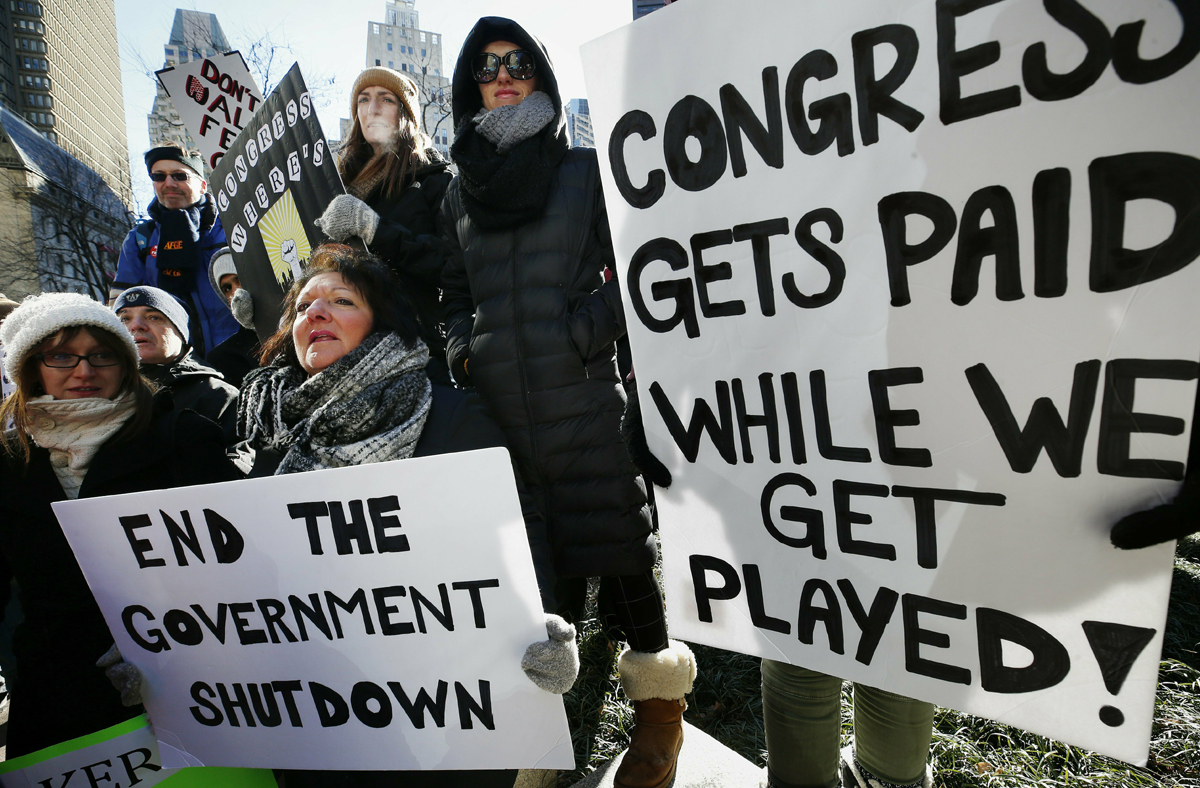 Government workers and their supporters hold signs during a protest in Boston, Friday, Jan.11, 2019. The workers rallied with Democratic U.S. Sen. Ed Markey and other supporters to urge that the Republican president put an end to the shutdown so they can get back to work. [Photo: AP/Michael Dwyer]

The House and Senate voted to give federal workers back pay whenever the federal government reopens and then left town for the weekend, leaving the shutdown on track to become one for the record books once the clock struck midnight and the closure entered its 22nd day. And while Trump privately considered one dramatic escape route — declaring a national emergency to build the wall without a new stream of cash from Congress — members of his own party were fiercely debating that idea, and the president urged Congress to come up with another solution.

"What we're not looking to do right now is national emergency," Trump said. He insisted that he had the authority to do that, adding that he's "not going to do it so fast" because he'd still prefer to work a deal with Congress.

About 800,000 workers missed paychecks Friday, many receiving blank pay statements. Some posted photos of their empty earnings statements on social media as a rallying cry to end the shutdown, a jarring image that many in the White House feared could turn more voters against the president as he holds out for billions in new wall funding.

With polls showing Trump getting most of the blame for the shutdown, the administration accelerated planning for a possible emergency declaration to try to get around Congress and fund the wall from existing sources of federal revenue. The White House explored diverting money for wall construction from a range of other accounts. One idea being considered was diverting some of the $13.9 billion allocated to the Army Corps of Engineers after last year's deadly hurricanes and floods.

That option triggered an outcry from officials in Puerto Rico and some states recovering from natural disasters, and appeared to lose steam on Friday.

California Gov. Gavin Newsom called it an "unconscionable" idea to look at using disaster assistance "to pay for an immoral wall that America doesn't need or want."

Republican Rep. Kevin Brady of Texas told reporters after discussions with the White House: "I feel confident disaster relief dollars will not be tapped." Brady said the administration was looking at the "breadth" of unspent dollars in other government accounts.

Other possibilities included tapping asset forfeiture funds, including money seized by the Department of Justice from drug kingpins, according to a congressional Republican not authorized to speak publicly about private conversations. The White House also was eyeing military construction funds, another politically difficult choice because the money would be diverted from a backlog of hundreds of projects at bases around the nation. 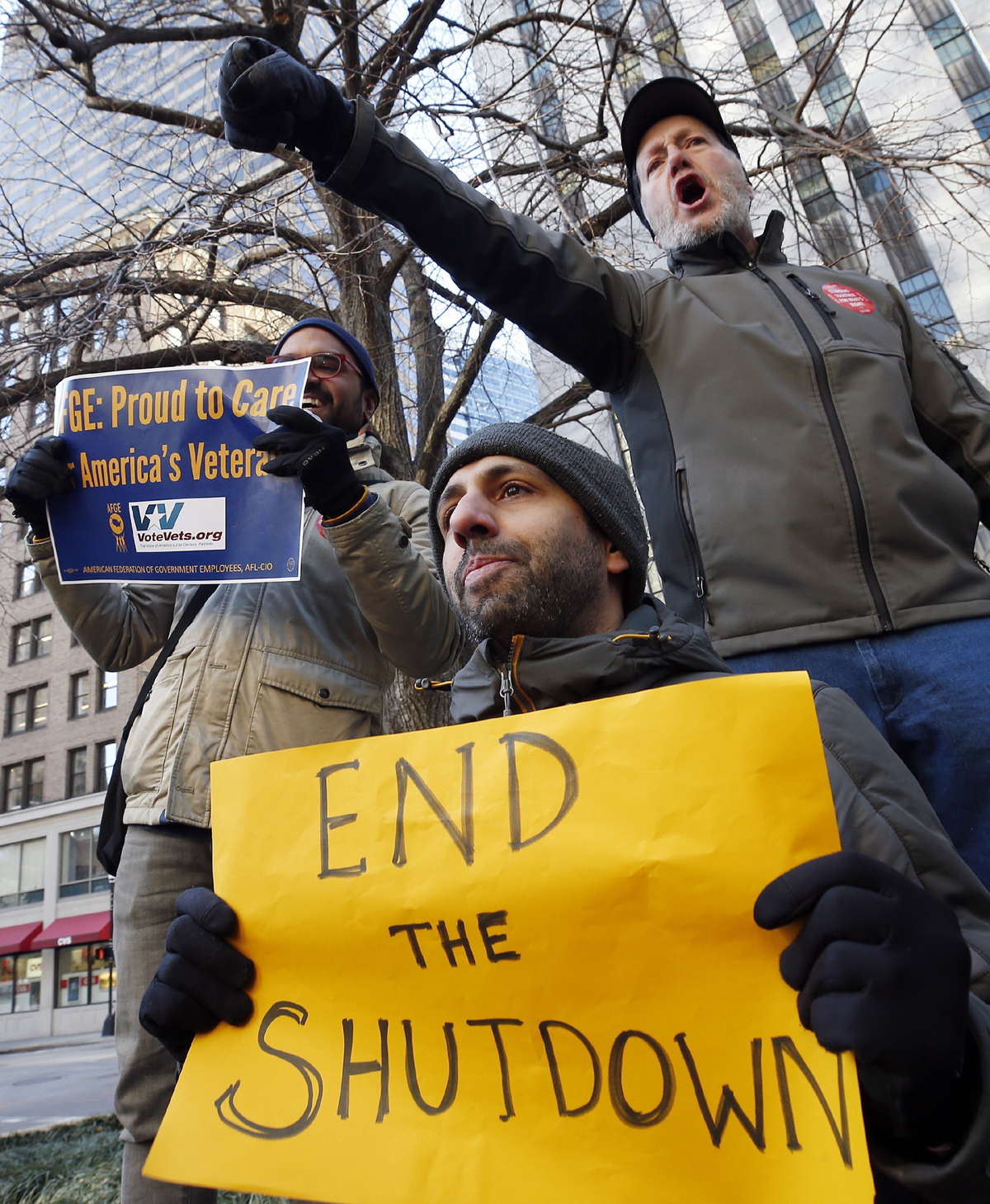 Government workers and their supporters hold signs during a protest in Boston, Friday, Jan.11, 2019. The workers rallied with Democratic U.S. Sen. Ed Markey and other supporters to urge that President Donald Trump put an end to the shutdown so they can get back to work. [Photo: AP/Michael Dwyer]

Despite Trump's go-slow message, momentum grew in some corners for some sort of emergency declaration. Republican Sen. Lindsey Graham of South Carolina, who met with the president on Friday, took to Twitter afterward to urge: "Mr. President, Declare a national emergency NOW. Build a wall NOW."

Trump has been counseled by outside advisers to move toward a national emergency declaration, but many in the White House are trying to pump the brakes. Senior aide Jared Kushner, who traveled with the president to the Texas border on Thursday, was among those opposed to the declaration, arguing to the president that pursuing a broader immigration deal was a better option. A person familiar with White House thinking said that in meetings this week, the message was that the administration is in no rush and wants to consider various options. The person was unauthorized to discuss private sessions and spoke on condition of anonymity.

Democratic House Speaker Nancy Pelosi, who has signaled moral opposition to the wall and vowed to oppose any funding, said the president is seeking to divert attention from special counsel Robert Mueller's investigation and other White House problems.

"This isn't a wall between Mexico and the United States. This is a wall between his failures of his administration," Pelosi told reporters. "This is a big diversion, and he's a master of diversion."

Although Trump has been frustrated with aides as he loses the public relations battle over the shutdown, White House attempts to use the trappings of the presidency to buttress his case for the wall have yielded mixed results in the president's view.

Trump has long avoided using the Oval Office as a backdrop for his speeches, telling aides that previous presidents looked stilted and "flat" in the standard, straight-ahead camera angle. But he was persuaded that the seriousness of the moment warranted the Oval Office for his speech to the nation this week about the fight over the border wall.

But since Tuesday night's address, Trump has complained that he looked lifeless and boring, according to a Republican close to the White House who was not authorized to speak publicly about private conversations. The president also expressed misgivings about his visit to the border, believing it would do little to change anyone's mind.

In a Friday morning tweet, Trump called illegal immigration on the southern border "an invasion," even though border crossings have declined in recent years. Later, he tried to blame Democrats for the shutdown, claiming he's flexible about the needed barrier.

Trump has told advisers he believes the fight for the wall — even if it never yields the requested funding — is a political win for him.

But some of his outside advisers have urged him to declare a national emergency, believing it would have two benefits: First, it would allow him to claim that he was the one to act to reopen the government. Second, inevitable legal challenges would send the matter to court, allowing Trump to continue the fight for the wall — and continue to excite his supporters — while not actually closing the government or immediately requiring him to start construction.

Such a move could put Republicans in a bind. While it might end the standoff over funding and allow Congress to move onto other priorities, some Republicans believe such a declaration would usurp congressional power and could lead future Democratic presidents to make similar moves to advance liberal priorities.

Rep. Mark Meadows, R-N.C., a leader of the conservative House Freedom Caucus who speaks to Trump frequently, said that unless Republicans and Democrats strike an unlikely compromise, "I fully expect him to declare a national emergency."

"Most conservatives want it to be the last resort he would use," Meadows said. "But those same conservatives, I'm sure if it's deployed, would embrace him as having done all he could do to negotiate with Democrats."

Many Democrats, meanwhile, say they have little reason to give into Trump's demand for border wall funding since taking control of the House in the midterm elections.

"The American people gave us the majority based on our comprehensive approach to this problem and they rejected President Trump's," said Rep. Debbie Wasserman Schultz, D-Fla.