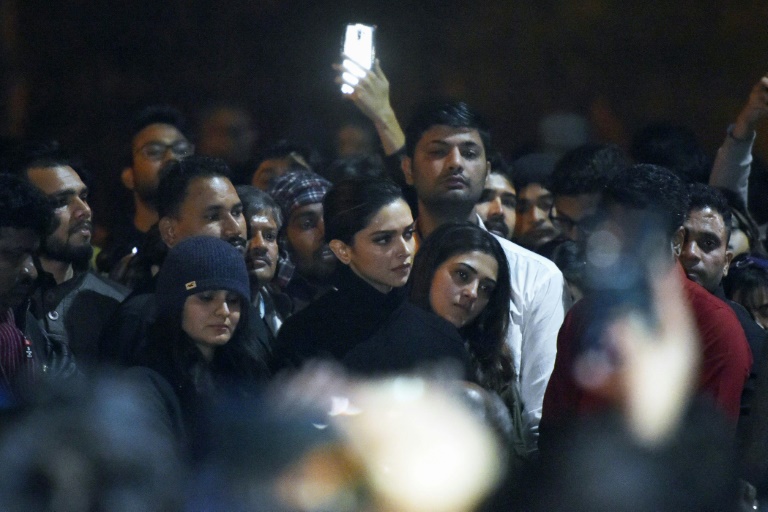 Padukone waded into a sea of student protesters in Delhi on Tuesday night, evoking cheers from the surprised crowd. (Photo: AFP)

Fearing a backlash from fans, politicians and religious zealots, Bollywood stars have in the past usually steered clear of India's fiery politics. But the country's top actress may have changed that.

Signalling a possible generational shift, Deepika Padukone waded into a sea of student protesters in Delhi on Tuesday night, evoking loud cheers from the surprised crowd.

Few had any inkling that Padukone would attend the demonstration at a prestigious university where the left-leaning student body has long been in the crosshairs of India's ruling party.

Her appearance sparked a social media war between those wanting her new film boycotted -- suggesting her only motive was publicity for the movie which released Friday -- and others applauding her courage.

Either way, many said the moment marked a watershed in India's multi-billion-dollar Hindi movie industry.

"It was a gutsy move," said Mumbai-based novelist and commentator Shobhaa De, and reflected a "big shift" for Bollywood.

"Stars today understand that their constituency is young India, and young India respects people who speak up," De told AFP.

In a country where obedience to elders is all but enshrined in law, young Indians are demanding the right to be heard, protesting against everything from university fee hikes to most recently a new citizenship law criticised as anti-Muslim.

And in an age ruled by social media, even movie stars are not insulated from the issues that matter to their fans.

"None of this would be happening without social media," said actress Swara Bhasker, one of the few stars who have consistently spoken out against the government.

"Bollywood has faced so much criticism on Twitter for not being politically engaged, and much of it from young people who are your target audience," she told AFP.

"Why would you want to alienate them?"

Another factor is events on the ground since Prime Minister Narendra Modi's government passed the citizenship law last month.

Hundreds of thousands of people have participated in demonstrations nationwide, and at least 25 have been killed in clashes with police.

"Ultimately the film industry is a microcosm of society, and I don't think images of bloodied students go down well with middle-class Indians," Richa Chadha, another actress, told AFP.

"Actors are not elected officials but they can sense the mood of the nation," she added.

A year ago Modi posed for a now-famous selfie with the who's-who of Bollywood, including Padukone's husband Ranveer Singh.

Sidharth Malhotra and Varun Dhawan, two of the stars who appeared in that selfie last January, have now both spoken out against the violence.

"My heart goes out to all the students back home in Delhi," Malhotra tweeted last month, calling it "sad to see violence against citizens for voicing their opinion through peaceful protests".

"I think we cannot stay neutral in such issues," said Dhawan.

In contrast to Bollywood's younger generation, the old guard including superstars such as Shah Rukh Khan, Aamir Khan and Amitabh Bachchan have not commented on the protests.

They perhaps have learned the hard lesson that sticking your neck out is a dangerous business, risking film boycotts, the loss of lucrative sponsorship deals, or worse.

Padukone's last release "Padmaavat" came under fire from religious radicals linked to Modi's Bharatiya Janata Party (BJP) who objected to her portrayal of the legendary Hindu queen in the epic.

Mobs attacked the director and vandalised the set. One BJP politician even offered a bounty for the actress to be beheaded, and a Molotov cocktail was lobbed at a cinema.

On Friday, cabinet minister Smriti Irani accused Padukone of being unpatriotic and standing "with people who wanted the destruction of India".

Bhasker, who has been the target of vicious online bullying over her views, praised Padukone.

"For years it's been easy to malign those of us who spoke up and write it off as a publicity stunt, so to have the biggest female star in the country do it is a huge win in the perception battle," she said.

"Ultimately though, this moment belongs to the protesters and the students who have awakened this country's conscience."