JAKARTA, Nov. 11 (Xinhua) -- The relations between the Association of Southeast Asian Nations (ASEAN) and China have been expanded and deepened, and the cooperation between the two sides has been mutually beneficial, ASEAN Secretary-General Lim Jock Hoi has said. 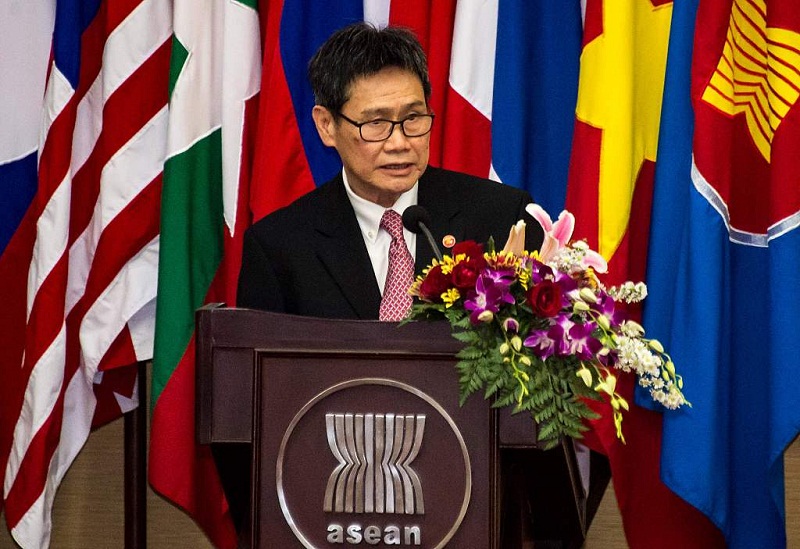 Lim Jock Hoi (R), the new Secretary-General of the Association of Southeast Asian Nations (ASEAN), delivers his speech during a handover signing ceremony for his post in Jakarta on January 5, 2018. (File photo: VCG)

The relations have expanded and deepened to cover a wide range of cooperation areas of mutual benefits since the launch of the ASEAN-China strategic partnership in 2003, Lim said in a written interview with Xinhua ahead of the 33rd summit of ASEAN and related meetings, held in Singapore from Nov. 11 to 15.

"Both ASEAN and China are important players in preserving regional peace, stability and prosperity. These are the basis that underlies the political determination of both sides to further strengthen the partnership and enhance the mutually beneficial cooperation."

The two sides have strengthened dialogue and cooperation on political-security issues of common interests and concerns that contributes to the well-being and stability of the region, Lim said.

"The ASEAN-China FTA has since been upgraded and work is underway for its implementation to bring further benefits to ASEAN and Chinese businesses," he said.

ASEAN and China continued to work together through economic and technical assistance projects to further support economic cooperation, including the smooth implementation of the FTA, said the secretary general, adding as 2018 is also the ASEAN-China Year of Innovation, there is further potential for the two sides to advance cooperation and explore synergies in technology and the digital economy.

"ASEAN and China have also made great strides in socio-cultural cooperation, with work conducted in the areas of, among others, public health, science and technology, education, culture, labor and social security, local government and people-to-people exchanges, environment, media, youth, social development, and poverty reduction," Lim said.

On the future development of ties between the two sides, Lim said ASEAN and China will continue to pursue mutually beneficial cooperation in addressing traditional and non-traditional security challenges, including cross border transnational crimes, and emerging issues such as cybercrime.

On the economic front, ASEAN and China are committed to an open and rules-based multilateral trading system, said the secretary-general, adding ASEAN and China, with other participating countries, are working together to expedite the conclusion of negotiations on the Regional Comprehensive Economic Partnership (RCEP) to help boost regional trade and growth.

The secretary general believed that a strong relationship between ASEAN and China can contribute to positive synergies for Asia and support regional and global development.

ASEAN was established in August 1967 by Indonesia, Malaysia, the Philippines, Singapore and Thailand. The group later expanded to include Brunei, Cambodia, Laos, Myanmar and Vietnam.