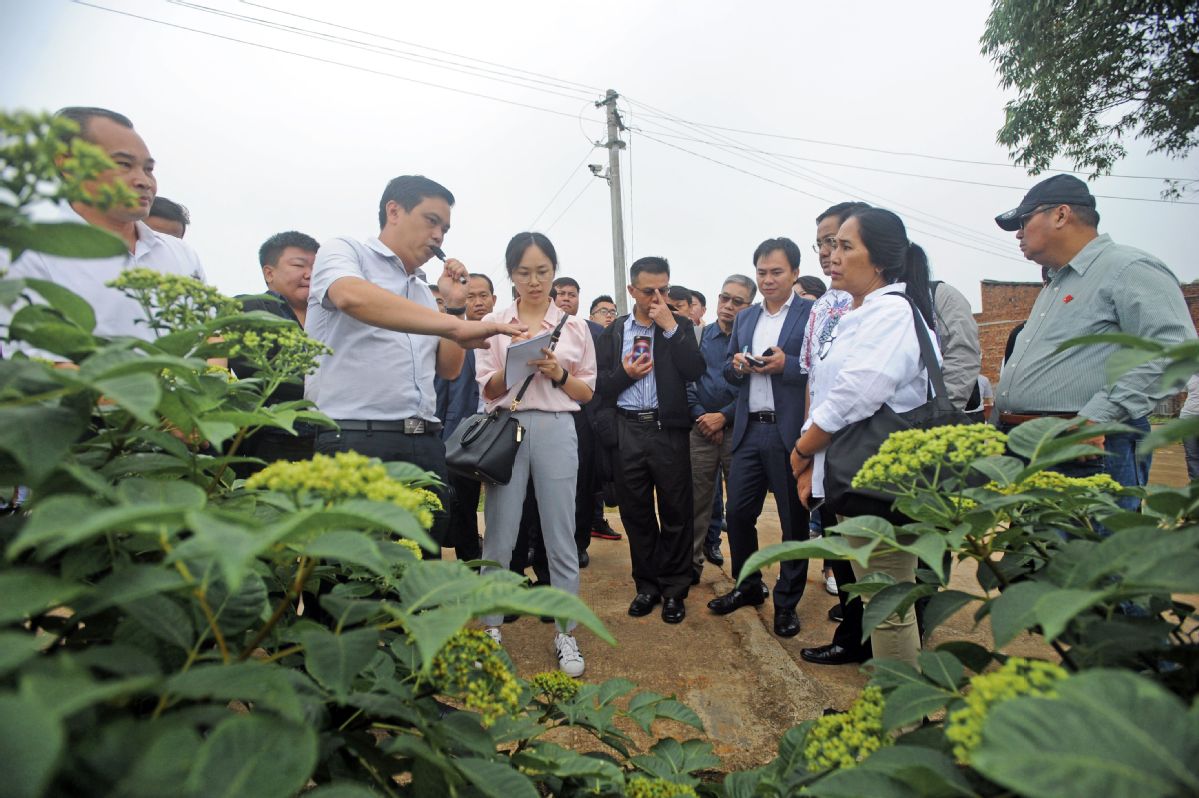 Officials from the member countries' ruling parties made the comments on Friday during a three-day visit to the Guangxi Zhuang autonomous region in the southwest.

The autonomous region, which had 4.52 million poverty-stricken people at the end of 2015, is regarded as a major front in the fight against poverty across the country.

The delegates saw firsthand government efforts to help fight poverty through cooperatives and companies being encouraged to offer expertise, infrastructure and management skills.

Do Lien Huong, from the Communist Party of Vietnam, said it was "brilliant" that the government had involved companies to provide scientific management.

"The rural area looks so different from when I came here 10 years ago. I must say the Chinese government has taken useful measures to develop the backward area," Do Lien Huong said.

Charnkrij Dejvitak, a central executive committee member of Thailand's Palang Pracharath Party, said the keys to China's success on poverty alleviation represent the central government's long-term planning and its determination to carry it out.

"About 60 percent of our people in Thailand are suffering from poverty and we can learn so much from the Chinese model in which the government, the companies and the people are cooperating so well. Each party can benefit from this sustainable and effective solution," said Charnkrij.

Wei Qingcheng, a farmer in Xinle village of Nanning, was one of the impoverished locals who spoke to the delegates about how his fortunes were turned around.

He used to grow corn and live from hand to mouth.

But last year, the 61-year-old farmer made a healthy profit of 180,000 yuan ($26,000) by planting an herb used in traditional Chinese medicine with the help of the local government.

"I never expected that I could earn more than my two sons who are working in cities," he said.

In 2015, a cooperative that specialized in Tetradium ruticarpum planting was set up to increase villagers' income. The herbal medicine, a distant relative of citrus, is easy to grow in mountain areas.

The market for it is promising as it can also be used as an insect repellent and is effective in pain relief.

"Our company offers plants, fertilizer and technical guidance to farmers all free and we are also responsible for the marketing," said Huang Bingzhu, manager of the Yinggao Agriculture and Animal Husbandry Co based in Nanning, who runs the cooperative.

Huang said that villagers only need to provide their labor and land. Farmers in return can get 70 percent of the profits. "Now we have 265 households engaged in the business and the growing area has reached 166.7 hectares this year," Huang said.

To ensure the farmers have income all year round the collective has also developed an edible fungi industry using rotten branches from the herb plants and pulp waste.

According to Pan Chunlan, the head of Xinjiang town in the region, most villagers have built new three-story buildings with the money they have earned in recent years.

The delegation members were invited by the International Department, Central Committee of the CPC to attend the neighborhood seminar held in Nanning.

"We hope that the political parties of China and ASEAN countries, especially the ruling parties, can deepen exchanges, dialogue and mutual understanding, help each other enhance governance capabilities and jointly contribute their wisdom to the peace and prosperity of the region," Wong Kah Who said.

"Maybe we should learn something from China's opening-up and establish multilateral cooperation to boost common prosperity," Chhair Sokty said.