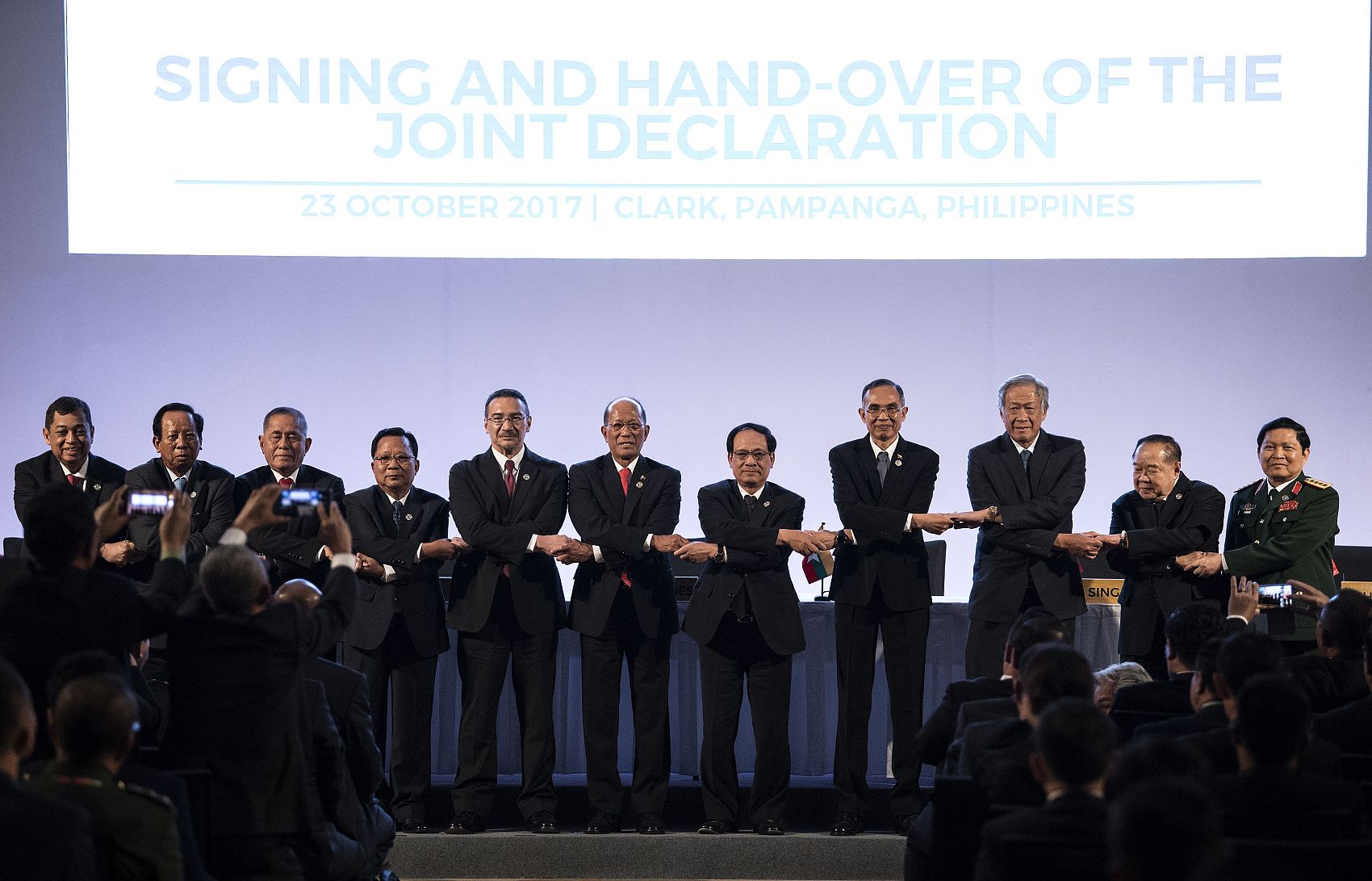 The defense ministers from the Association of Southeast Asian Nations (ASEAN) nations agreed on Monday to step up counter-terrorism measures to prevent pro-Islamic State (IS) militant groups from gaining a stronghold in Southeast Asia.
At the end of their annual security meeting, the ASEAN ministers stressed the need to strongly address the "threat of radicalism" by making the peoples of the ASEAN aware of the perils of violent extremism.
In a joint declaration issued at the end of the ASEAN Defense Ministers' Meeting (ADMM), the ASEAN ministers emphasized the need "to enhance regional cooperation through intelligence and information sharing, increasing surveillance, and promoting awareness among the public about the threat of radicalism."
They also vowed to collectively combat terrorism "in all its forms and manifestations in accordance with the ASEAN Convention on Counterterrorism and ASEAN Comprehensive Plan of Action on Counterterrorism as well as identify ways to strengthen counterterrorism cooperation among ASEAN defense establishments."
The ministers also expressed "full support for the Philippines' efforts to address the security and humanitarian situation" in the southern Philippine city of Marawi where government security forces and pro-Islamic State (IS) fighters were locked in a fierce five-month urban warfare that killed nearly 1,200.
Philippine Defense Secretary Delfin Lorenzana announced in a press conference on Monday the end of"all combat operations" in the southern Philippine city of Marawi, saying the city has been cleared of the last terrorist.
Lorenzana said government forces have cleared the last building occupied by militants and its vicinity. Forty-two bodies have also been recovered in the last ground assault to completely retake the city from the IS militants.
"In crushing thus far the most serious attempt to export violent extremism and radicalism in the Philippines and in the region, we have contributed to preventing its spread in Asia and give our share to maintaining global peace, stability, and security," Lorenzana told reporters.
Malaysia initiated talks to discuss terrorism before the ADMM opened. Indonesia, Malaysia and the Philippines have an existing joint air and maritime patrols military agreement to quell the threat of terrorism in their common maritime borders.
In the joint declaration, the ministers also expressed "grave concern over the escalation of tensions in the Korean Peninsula including the testing and launching by the Democratic People's Republic of Korea (DPRK) of intercontinental ballistic missiles (ICBM) in addition to its previous nuclear tests and ballistic missile launch."
"(The ministers) strongly urged the DPRK to immediately comply with its obligations arising from all the relevant UN Security Council resolutions," the joint declaration read.
On maritime security, the ministers stressed the need to maintain and promote peace, security, stability, and freedom of navigation in and overflight above the South China Sea.
The ministers also moved to make the ADMM-Plus dialogue to be held yearly to better address common security challenges confronting Asia and the Pacific. ADMM-Plus include ASEAN and its eight dialogue partners - Australia, China, India, Japan, New Zealand, South Korea, Russia and the United States.
ADMM-Plus is currently being held every two years.
The ministers signed the joint declaration that also reaffirmed their commitments to promote and strengthen defense and security cooperation.
The Philippines, chair of ASEAN this year, is host to the 11th ADMM and 4th ADMM-Plus security sessions.
The Philippines wants to push several initiatives during the two-day meeting, including "a three-year work program that will focus on streamlining, synergizing, and rationalizing ADMM efforts, which the ministers adopted at the meeting.
"This is to pursue our cooperative mechanisms in the most efficient and effective way possible," Lorenzana said.
ADMM-Plus will meet on Tuesday.
Established in 2006, the ADMM is the highest defense consultative and cooperative mechanism in the ASEAN.
ADMM aims to promote mutual trust and confidence through greater understanding of defense and security challenges, as well as enhancement of transparency and openness among ten ASEAN member states - Brunei, Cambodia, Indonesia, Laos, Malaysia, Myanmar, the Philippines, Singapore, Thailand and Vietnam.
ADMM-Plus is a platform for ASEAN defense ministers to engage their dialogue partners from Asia and the Pacific.