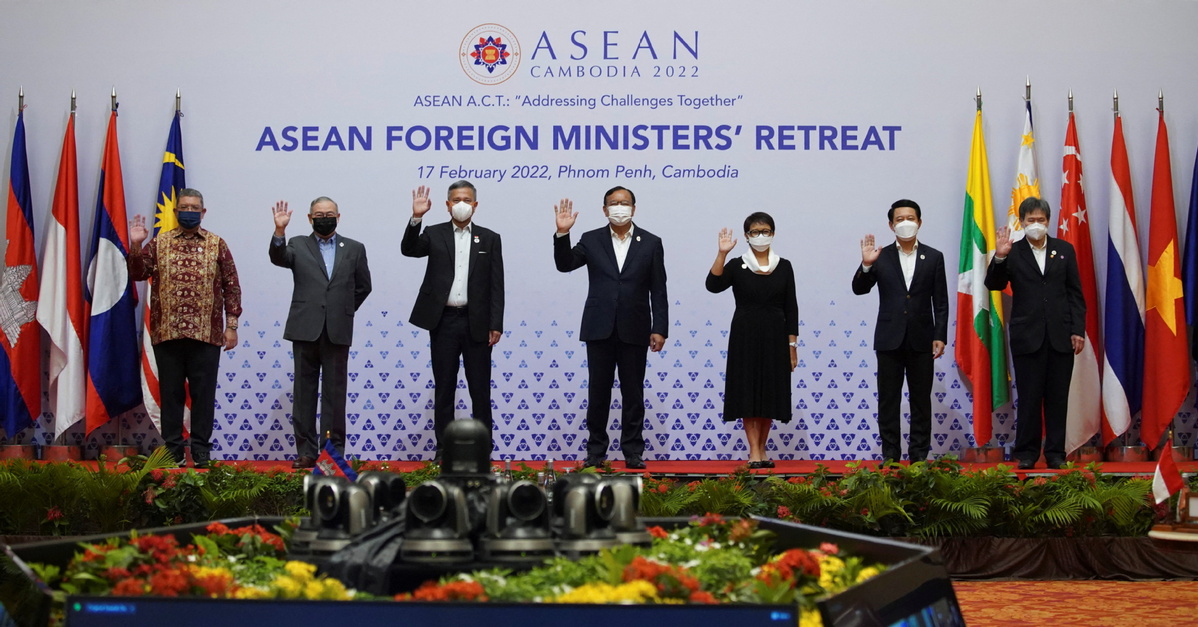 Efforts to promote sustainable development as part of Southeast Asia's recovery from the pandemic are likely to feature high on the agenda when foreign ministers from the ASEAN grouping meet in Cambodia next week.

The events will begin on Sunday and wrap up on Aug 6. Cambodia holds the rotating chair of the Association of Southeast Asian Nations.

In addition to the expected economic focus in the sessions, some believe discussions about events in Myanmar may also arise.

By Tuesday, Cambodia had invited foreign ministers from 38 countries to Phnom Penh for the meetings.

Luy David, the secretary of state of the Cambodian Foreign Ministry, said the country is also looking forward to welcoming high-level representatives from the European Union.

Kin Phea, director-general of the Royal Academy of Cambodia's International Relations Institute, said it is a good time for ASEAN to work with Russia to address such issues as the global food and fuel shortages through ASEAN-led platforms.

The meetings offer opportunities to encourage Russia and Ukraine to hold peace talks as well as ask external partners to consider Russia's concerns and jointly address the issues, some observers say.

However, Chheang Vannarith, president of the Asian Vision Institute think tank in Phnom Penh, said: "It's not the intention of Cambodia, as a chair, to let these geopolitical issues dominate the meetings because Cambodia's priority is post-COVID-19 recovery."

Thomas Daniel, a senior fellow at the Institute of Strategic and International Studies Malaysia, said one of the most troublesome issues at the meetings will likely "be the developments in Myanmar and how ASEAN is going to manage its relationship with Myanmar".

Myanmar's seat at the meetings will remain vacant because its government declined an invitation to send a non-political representative, said Prak Sokhonn, Cambodian deputy prime minister and foreign minister. He is also the special envoy of the ASEAN chair to Myanmar.

Thomas said there has been little progress on a five-point consensus reached last year among ASEAN nations for a peaceful solution to the Myanmar crisis.

ASEAN ministers could be wary of geopolitical issues raised by other participating countries that are not necessarily conducive to the mobilization of collective efforts to tackle common challenges for sustainable development, some analysts say.

Kin Phea noted that Cambodian Prime Minister Hun Sen has made it clear that participation in any framework or initiative that intends to contain another country or region would absolutely not be welcome.