The Association of Southeast Asian Nations, China, Japan and South Korea (ASEAN Plus Three countries or 10+3) pledged on Monday to enhance regional connectivity to realize their collective efforts for regional integration and promote sustainable development. 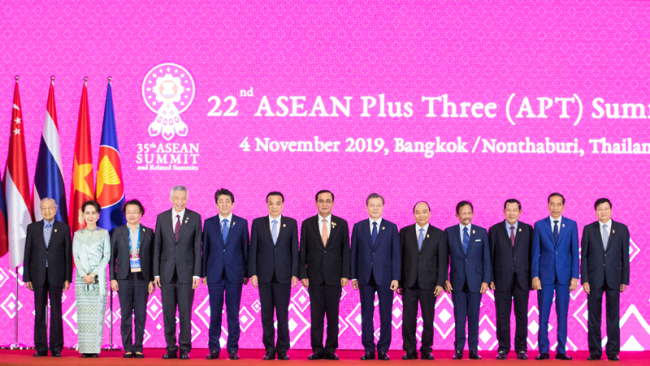 In a statement issued after the summit, the ASEAN Plus Three countries agreed to promote regional connectivity among them by enhancing links and synergies between the Master Plan on ASEAN Connectivity 2025 (MPAC 2025) and key connectivity initiatives promoted by China, Japan, South Korea, as well as other sub-regional and multilateral cooperation frameworks with and within ASEAN, in order to attain a people-oriented, people-centered community of peace and prosperity with sustainable and inclusive growth and development for shared benefit in the East Asian region.

They vowed to promote complementarities between the ASEAN Community Vision 2025 and the United Nations 2030 Agenda for Sustainable Development, where connectivity and infrastructure are components, to catalyze sustainable development in the ASEAN Plus Three countries.

They said they will enhance physical connectivity by promoting an integrated multimodal transport, including air, sea and land transport between ASEAN and the wider region in order to ensure seamless logistics and boost the competitiveness of the ASEAN Plus Three countries.

They promised to promote digital connectivity and innovation in the ASEAN Plus Three countries by exchanging views and information on regulatory frameworks for the delivery of digital services, sharing best practices to support the digital economy of the region, supporting ASEAN's efforts to establish an ASEAN open data network, and equipping micro, small and medium enterprises with the capabilities to access new technologies and financial support for development and innovation, among others.

The ASEAN Plus Three countries will also promote greater people engagement and cooperation on people-to-people connectivity initiatives by enhancing facilitation of travel and tourist visits as well as developing quality tourism, and further strengthening cultural exchanges and cooperation, so as to enhance mutual understanding and greater awareness of each other's culture.

The ASEAN Plus Three cooperation mechanism was established in the late 1990s when ASEAN countries decided to enhance cooperation with other major economies of Asia against the backdrop of economic globalization.

The first ASEAN Plus Three summit was held in Malaysia in 1997, a time when countries in the region were facing an economic setback. The financial crisis was regarded as having provided the impetus for this summit.