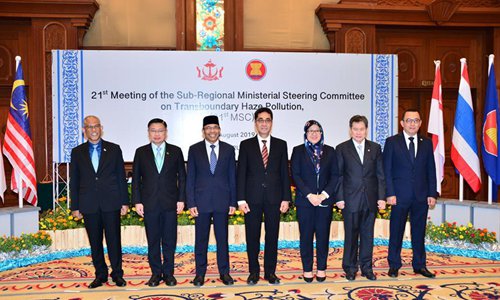 Senior officials from several ASEAN countries pose for a group photo during the 21st Meeting of the Sub-Regional Ministerial Steering Committee on Transboundary Haze Pollution in Bandar Seri Begawan, capital of Brunei, on Aug. 6, 2019. (Photo: Xinhua)

Environment officials from Brunei, Singapore, Malaysia, Indonesia and Thailand on Tuesday called for timely actions by relevant national and regional agencies within the ASEAN (the Association of Southeast Asian Nations) sub-regional bloc to prevent land and forest fires and haze pollution.

The officials were in Brunei for the 21st Meeting of the Sub-Regional Ministerial Steering Committee on Transboundary Haze Pollution (21st MSC). Haze pollution has been a recurring problem for these ASEAN countries, who hope to achieve a haze-free ASEAN by the year 2020.

"The Transboundary haze pollution is a prolonged issue that has been impacting our region for more than two decades," said Brunei Minister of Development Haji Suhaimi during the meeting.

"The effect was predominant and has caused serious consequences on the environment and natural resources, health, tourism, transportation, and other socioeconomic activities in several countries in ASEAN," he added.

According to the weather outlook information presented by the ASEAN Specialised Meteorological Centre (ASMC), drier and warmer conditions in the southern ASEAN region were expected between August and October 2019.

The drier and warmer weather could lead to an escalation of hotspot activities and increase the risk of transboundary haze occurrence in the region.

"Prevention and mitigation actions and measures through concerted national efforts, regional and international cooperation across sectors and stakeholders seem to be the pragmatic approach to address this issue," he said.

According to a media release produced during Tuesday's meeting, MSC countries pledged to remain vigilant and to monitor and step up their haze preventive efforts to minimise any possible occurrence of transboundary smoke haze during periods of drier weather.