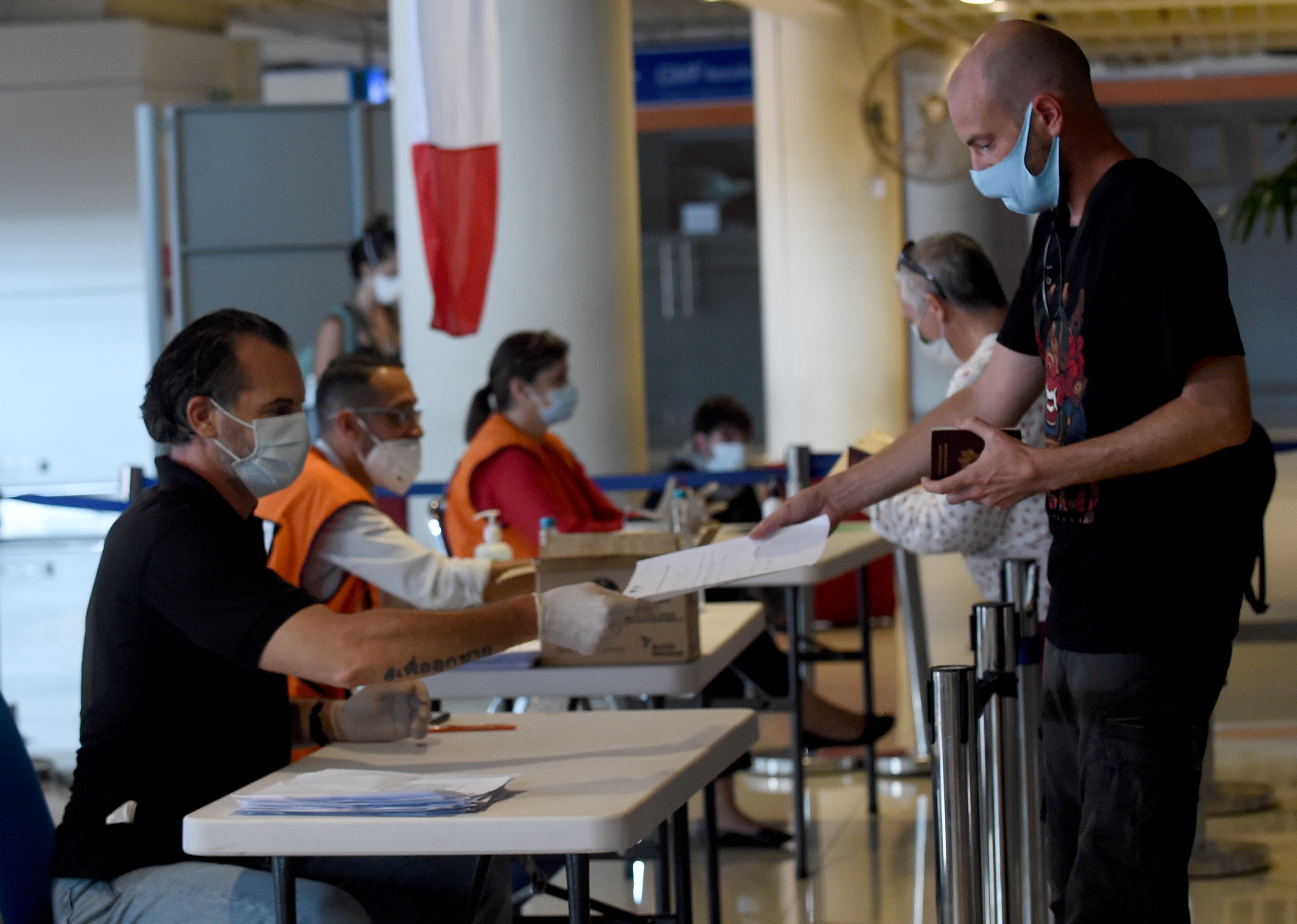 Stranded tourists register with French embassy staff ahead of their evacuation flight amid concerns from the COVID-19 coronavirus at the Ngurah Rai international airport near Denpasar, Indonesia's resort island of Bali, on March 28, 2020. (Photo: AFP)

The Indonesian government said on Sunday the death toll of COVID-19 in the country climbed to 114, the highest in Southeast Asia.

The number of confirmed cases jumped to 1,285, and 64 patients have recovered.

More venues in Australia are to be closed to slow the spread of COVID-19 in the country, while more stringent restrictions are put to public gatherings, said Australian Prime Minister (PM) Scott Morrison on Sunday evening.

In addition to the institutions and businesses already closed last week, more public areas are to follow suit, including public playgrounds, outside gyms and skate parks. They are to be closed from Monday.

Both indoor and outdoor public gatherings are limited to two people, but "states and territories will determine whether they proceed to make this an enforceable limit."

A total of 150 million Australian dollars (92.5 million U.S. dollars) will be spent on domestic, family and sexual violence initiatives after data from Google revealed a 75 percent uptick in searches related to domestic violence since the government introduced social distancing measures.

One more fatality was reported, bringing the death toll to seven.

In Malaysia, a total of 34 people have died of the COVID-19 as of Sunday with 150 newly confirmed cases, bringing the total to 2,470, said the Health Ministry.

A total of 388 have been cured and discharged from hospital, while 73 are currently being held in intensive care and 52 of those are in need of assisted breathing.

Japan on Sunday reported that the total number of COVID-19 infections has risen to 1,799.

Of the new cases, 68 were confirmed in Tokyo, the second consecutive day the capital city logged more than 60 cases.

The death toll stands at 65, including 10 from the virus-hit Diamond Princess cruise ship.

A team of Chinese medical experts, along with medical materials, arrived in Lao capital Vientiane by a chartered plane Sunday morning to assist Laos to fight the COVID-19 pandemic.

The Chinese medical team includes experts in various fields such as infection prevention and control, intensive care, epidemics, and laboratory testing. They also brought along with medical supplies.

A woman in her 70s passed away in Greymouth Hospital in West Coast region, South Island early Sunday morning. She tested positive for the virus on Friday morning.

South Korea reported 105 more cases of the COVID-19 compared to 24 hours ago as of midnight Sunday local time, raising the total number of infections to 9,583.

Eight more deaths were confirmed, lifting the death toll to 152. The total fatality rate came in at 1.59 percent.

Myanmar's Foreign Affairs Ministry announced temporary suspension of all types of visas for foreign nationals from all countries with effect from March 29 till April 30 as part of measures to control the risks of COVID-19 spread on Sunday.

The announcement included the suspension of the issuance of all types of visas (including social visit visa) to all foreign nationals, except diplomats accredited to Myanmar, United Nations officials resident in Myanmar and crew of ships and aircraft operating to and from Myanmar.