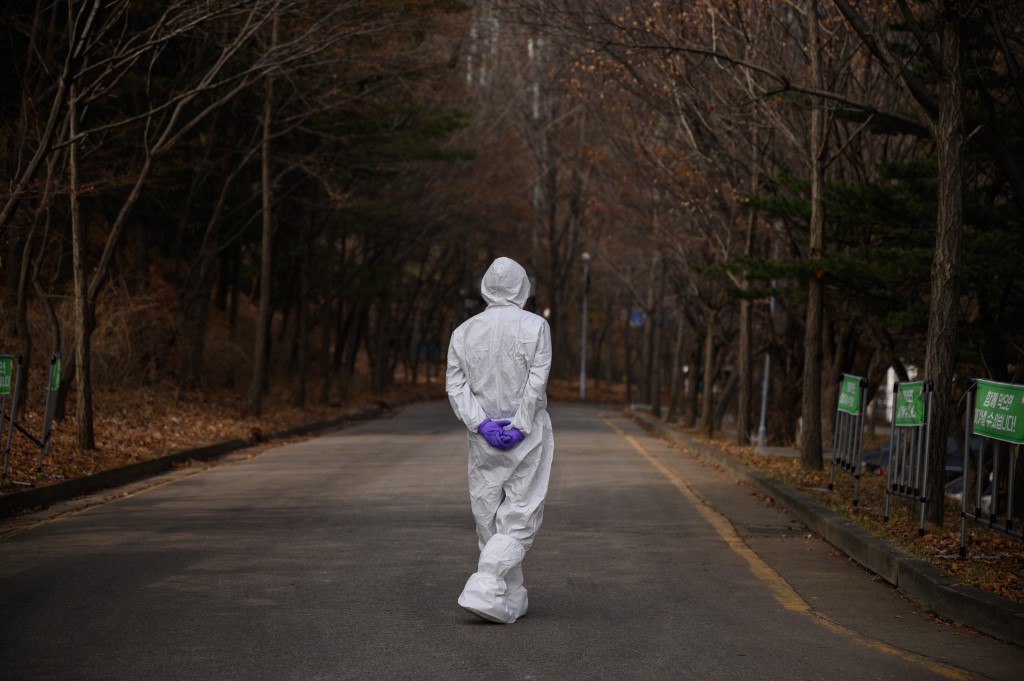 A health worker wearing a protective suit waits at a drive-through testing centre for the COVID-19 coronavirus in Seoul on March 7, 2020. (Photo: AFP）

With the new confirmed cases, the total number of infections in South Korea rose to 7,041 as of 4:00 p.m. local time on Saturday. Five more deaths were reported, lifting the death toll to 49.

Thirty-six patients were in critical conditions, raising a possibility for the fatality increase. The fatality rate from the virus here stood at 0.7 percent.

Ten more patients were discharged from quarantine after making full recovery, raising the combined number to 118.

The country has raised its four-tier virus alert to the highest "red" level.

The total number of infections in Daegu, about 300 km southeast of Seoul, and its surrounding North Gyeongsang province increased to 5,084 and 1,049 respectively as of midnight. It accounted for about 90 percent of the total.

The readings in Seoul and its adjacent Gyeonggi province were 108 and 130 each.

Among the 1,137 cases, 696 are from the Diamond Princess cruise ship moored in the port city of Yokohama, public broadcaster NHK reported.

The tally is based on data compiled by the health ministry and local governments. Among them, 12 people have died, six of them from the cruise ship.

Malaysia reported on Saturday 10 new cases of the COVID-19, bringing the total number of the cases to 93.

All the new cases were from a new cluster linked to the 33rd patient identified earlier, the ministry said in a statement.

Of the 93 cases in the country, 23 have recovered so far, according to the ministry.

In Australia, the total number of confirmed cases reached 72 as of Saturday evening with six new patients tested positive in the state of New South Wales (NSW).

Meanwhile, there are now 14 confirmed cases in the state of Queensland, 11 in Victoria, seven in South Australia, three in West Australia, two in Tasmania and one in the Northern Territory.

Among the six new patients in NSW, which brought the total number of confirmed cases in the state to 34, five are either close contacts or family members of those people who already tested positive to the virus.

The sixth most recent case returned from Italy on Qatar Airways flight QR 908, and the NSW Health is contacting flight passengers on that flight, which left Doha on March 1.

In Thailand, the Ministry of Public Health confirmed two more new cases of the COVID-19, bringing the total to 50.

The ministry also said that of those cases, 31 have fully recovered and most have returned home, and 18 are still in hospital with one in fatality.

"The two new cases are both Thai nationals, aged about 40, who are among a group of six being kept under close watch after their return from a business trip to Italy," Sukhum Kanchanapimai, permanent secretary to the Ministry of Public Health, said. "Since the six were isolated for observation, no other people have been exposed."

In Vietnam, the Ministry of Health on Saturday confirmed another new case of novel coronavirus infection, bringing the total confirmed cases in the country to 18.

The new case is a 27-year-old patient who has been to Daegu, South Korea, and returned to Vietnam from South Korea on Wednesday, the news agency reported.

The ministry on Friday night confirmed the 17th case of infection, a 26-year-old female who has traveled to Europe, also the first such case reported in the capital city of Hanoi.

The 16 previously confirmed cases in Vietnam have all been discharged from hospital, and the country so far has 101 suspected cases, according to the health ministry.

Health authorities of the Philippines and the World Health Organization (WHO) confirmed on Saturday a local transmission of COVID-19 in the country, with the tally of confirmed cases rising to six.

Health Secretary Francisco Duque told reporters that the new case involves a 59-year-old woman who is the wife of a previously confirmed case, a 62-year-old male known as case number 5. Neither of them have travel history abroad.

"The Department of Health (DOH) confirmed that the previously-reported fifth case of the COVID-19 is the first case of local transmission in the country after verification with the Bureau of Immigration showed that the patient had no recent travel history," Duque said.

In light of the confirmation of localized transmission in the country and in anticipation of possible sustained community transmission, Duque said DOH has raised the COVID-19 alert system to Code Red sub-level 1.

"What we have now is localized transmission. We are not trying to define what are the parameters of this cluster," WHO Representative in the Philippines Rabindra Abeyasinghe said in a news conference.

He stressed the need to identify those people who could be at risk, especially those who have come in contact with the couple.

Afghanistan's Public Health Minister Firozuddin Firoz on Saturday confirmed the detection of three new positive cases of the COVID-19, bringing the number of confirmed cases to four in the country.

All the new cases used to live in neighboring Iran and returned to their home country recently.

As a precautionary measure, the minister said that all those returning from Iran are screened at the border crossing points and those found sick or suspected sick will be sent for quarantine.

However, the minister dismissed any concerns about the spread of the disease in the country, saying the situation is under control.

In New Zealand, a fifth case of the COVID-19 was confirmed on Saturday.

The case involves a New Zealand citizen in her 40's, the partner of the third case announced earlier this week, Director-General of Health Dr. Ashley Bloomfield told a press conference.

The woman has stayed in self-isolation at home since Thursday. "Like three of the previous positive cases, this person doesn't require hospital level care and neither does anyone else in the family home," Bloomfield said.

Meanwhile, one woman in her 70s, who is among the eight New Zealanders who travelled on a cruise ship, the Grand Princess, had been in hospital for a respiratory illness, recovered and was discharged early in March but is now in hospital for an unrelated-condition.

The woman, although tested negative for the COVID-19, is considered a probable case. Close contacts of the woman, including a number of medical staff are standing down for 14 days as a precautionary measure, Bloomfield said.

Also on Saturday, two suspected cases of the COVID-19 were reported in Indian-controlled Kashmir and the authorities have ordered the closure of all primary schools in Jammu, the winter capital of the region and adjacent Samba district.