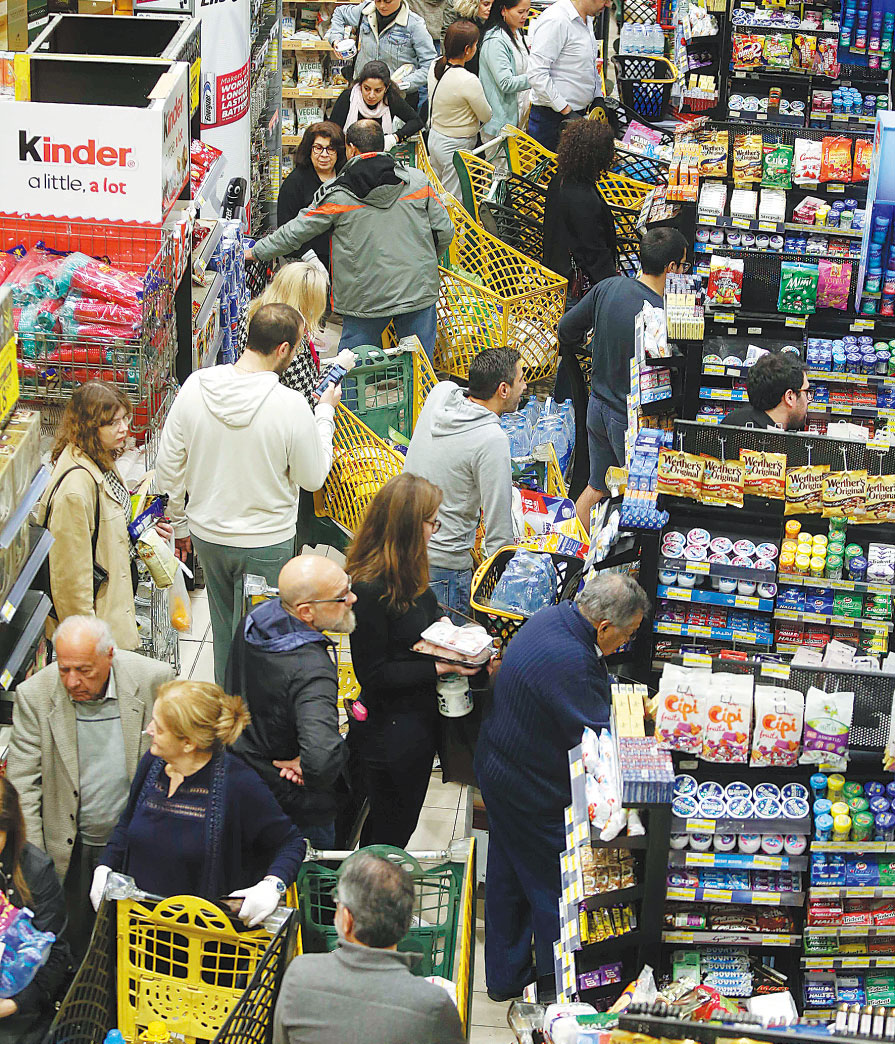 Shoppers select goods at a supermarket in Beirut, Lebanon, on Wednesday. (Photo: Agencies)

TEHERAN－The coronavirus outbreak continues to rage in Asia with top officials being infected and more cases reported, even as countries intensified efforts to hold it back.

The Fars story came after days of speculation about the health of Vice-President Eshaq Jahangiri, who has not been seen in pictures of recent top-level meetings.

There was no immediate report on state media about the Iranian officials being ill and no other media outlet in Iran confirmed the report.

Meanwhile, Iranian President Hassan Rouhani on Wednesday urged the nation to take the coronavirus crisis seriously, adding that the entire administration is involved in the fight, PressTV reported.

The Iranian health ministry said on Thursday that more than 1,000 new cases were confirmed, taking the total number to 10,075. The death toll rose by 75 to 429.

In South Korea, there was another drop in its new infections on Thursday with only 114 cases detected on Wednesday, taking the total to 7,869.

But concerns over possible mass transmission still exist in the Seoul metropolitan area, as the number of new infections linked to a call center in southwestern Seoul has so far reached 105, Yonhap News Agency said.

The city government said it plans to designate the affected building and nearby areas as a "special support zone for contagious diseases" to prevent the infections from developing into a bigger cluster infection.

In Japan, doubts are increasingly being raised over whether the Olympics can be held as scheduled from July 24 to August 9 when the coronavirus outbreak has been classified as a pandemic.

Japanese government spokesman Yoshihide Suga said on Thursday that there is no change in plans for the 2020 Olympic Games. And Tokyo Governor Yuriko Koike also said that canceling the Games is "unthinkable".

The number of confirmed cases in Japan stood at 643 on Thursday, according to the health ministry.

Lebanon on Wednesday suspended flights from countries hit hardest after announcing its second death in two days. It has so far recorded 61 cases.

Thousands of kilometers away, South Africa announced six new cases on Wednesday, taking its total to 13. And Morocco confirmed on Wednesday its sixth case, while Ivory Coast confirmed its first. Cases have also been recorded in Nigeria, Senegal, Cameroon, Togo, Burkina Faso and Congo.

Separately, China will work closely with African countries to fight the virus, said Liu Yuxi, the ambassador and the head of the Chinese Mission to the African Union.

In a letter, Liu said China's efforts have showed that the epidemic is "completely preventable, controllable and treatable", and the country is willing to share its experience with the African people, who have stood firmly with China since the outbreak.

China provided the first batch of testing kits to the AU and will offer more medical supplies soon, Liu said, adding that the country will also promote cooperation in the field of public health and disease control.

"Only with cooperation and a joint response of the international community can we defeat the outbreak and safeguard regional and global public health security," he said.