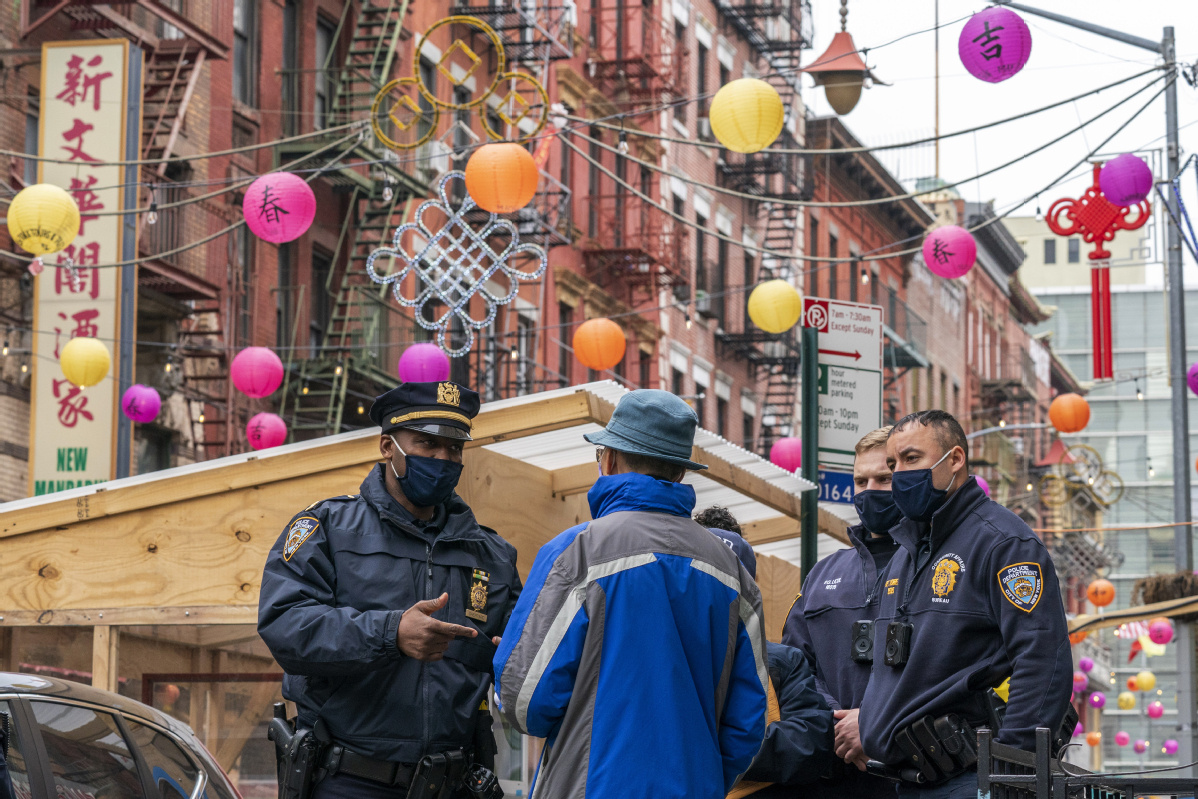 A police officer speaks to a resident Wednesday on a community outreach patrol in the Chinatown neighborhood of New York. The city is deploying additional law enforcement personnel to Asian communities in the wake of a shooting spree at three spas in Atlanta. MARY ALTAFFER/ASSOCIATED PRESS

Asian Americans were already worn down by a year of pandemic-fueled racist attacks when a white gunman was charged with attacking three spas in Atlanta and killing eight people, six of them Asian women.

Hundreds of Asian Americans and Pacific Islanders turned to social media to air their anger, sadness, fear and hopelessness. The hashtag #StopAsianHate was a top trending topic on Twitter hours after the shootings happened on Tuesday evening.

"I think the reason why people are feeling so hopeless is because Asian Americans have been ringing the bell on this issue for so long.... We've been raising the red flag," said Aisha Yaqoob Mahmood, executive director of the Atlanta-based Asian American Advocacy Fund, which does political and advocacy work across Georgia.

Many were outraged the suspect, 21-year-old Robert Aaron Long, was not immediately charged with hate crimes. Authorities said Long told police the attack was not racially motivated, and he claimed that he targeted the spas because of a "sex addiction". Six of the seven slain women were identified as Asian.

Law enforcement needs "some training understanding what a hate crime is. This man identified targets owned by Asians", said Margaret Huang, president and CEO of the Southern Poverty Law Center, which tracks hate groups. The gunman "was very clearly going after a targeted group of people".

Being Asian American herself, Huang said the shootings felt personal. She is worried that not classifying the attack as a hate crime will "absolutely discourage others from coming forward and seeking help".

Mahmood said Asian-American business owners in the Atlanta area were already fearful because of incidents like graffiti and breakins. The shootings will raise that worry to new heights.

US President Joe Biden on Wednesday renewed concerns that he expressed last week over a recent surge in violence. " I have been speaking about the brutality against Asian Americans for the last couple of months, and I think it's very, very troubling."

"After the month and year we had, we knew our folks needed the time to come together safely just to grieve and heal and mourn and speak to what's happening," said Mohan Seshadri, Asian Pacific Islander Political Alliance co-executive director.