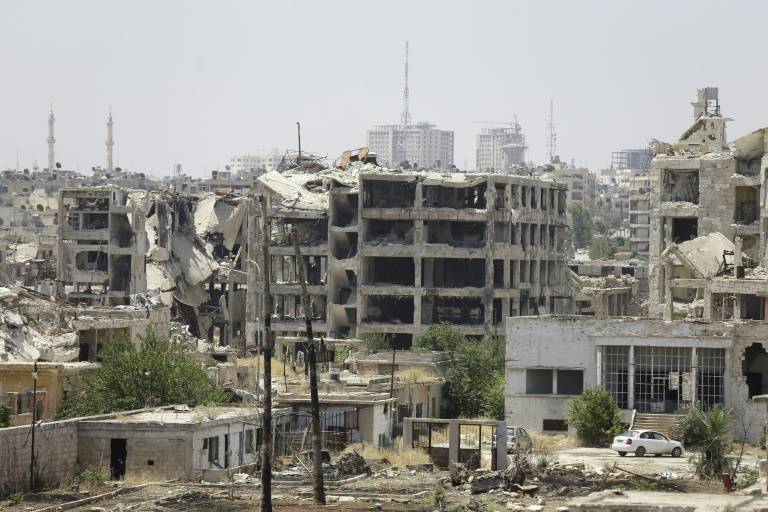 It is over a year since Bashar al-Assad's regime, with the help of Russian air strikes and barrel bombs, pounded the rebel-held east of Aleppo into submission.

Buildings were flattened, those who survived were left terrorised, hungry and filled with despair, and the stench of dead bodies rose up from the rubble as families searched for their loved ones.

Now, having largely destroyed the city it sought to control, the Assad regime wants the world to visit what remains: as a tourist destination.

This week the Syrian government is advertising Aleppo, along with other destinations in Syria, at the Fitur International Tourism Trade Fair in Madrid, "promoting" the country's attractions to the world.

It is the first time Syria has attended the trade fair since 2011, before the war broke out.

Along with the ruins of Aleppo, it also encourages people to visit the ancient Roman-era ruins of Palmyra, the UNESCO-listed archaeological site which was twice controlled by the Islamic State (IS) group.

IS fighters blew up some of the temples and burial towers before being forced out of the city for the final time last year by Syrian government forces and their Russian backers.

"This year is the time to rebuild Syria and our economy," Bassam Barsik, director of marketing at the Syrian Ministry of Tourism, told AFP.

Barsik said 1.3 million foreign visitors travelled to Syria last year, although that figure includes those who came from neighbouring Lebanon for only one day.

He argued that religious destinations, such as the historic Christian town of Maaloula, one of the last places on earth where Aramaic is still spoken, are still a draw to tourists.

Damascus, Tartus, Latakia and the historic Crusader castle of Krak des Chevaliers close to the border with Lebanon, although damaged by bombing, are other possible attractions.

"In 2017, the army controlled much of the country, and that was a big help to promote Syria abroad and attract tourist groups again," said Barsik.

Most countries advise citizens against all travel to Syria.

The war has displaced millions of people and is estimated to have claimed the lives of at least 340,000 people since 2011.