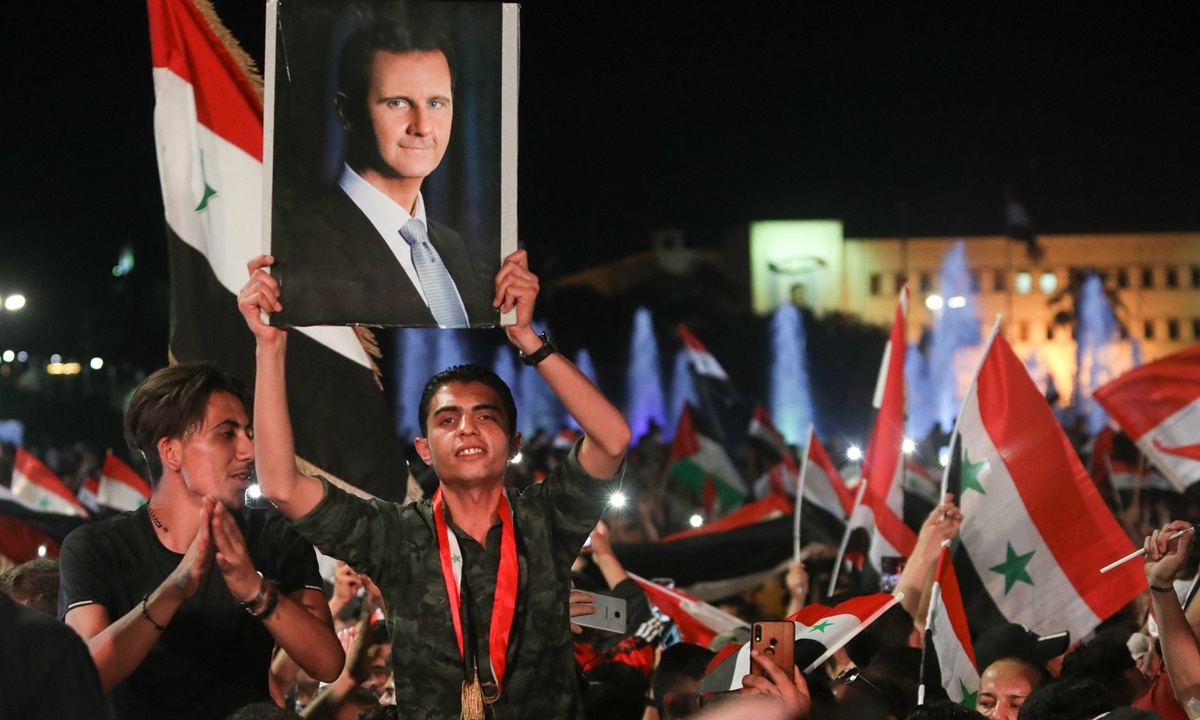 Syrians wave national flags and raise a portrait of their president as they celebrate in the streets of the capital Damascus, a day after an election set to give President Bashar al-Assad a fourth term, on Thursday. (Photo: AFP)

Syrian President Bashar al-Assad's reelection reflects US failure in its Syria and Middle East policies, underscoring the importance of China's policy of non-intervention for regional stability, experts told the Global Times on Tuesday.

Assad won his fourth term with over 95 percent of the votes on May 27.

Chinese President Xi Jinping on Monday sent a congratulatory message to Assad over the latter's re-election.

In his message, Xi said he attaches great importance to the development of China-Syria relations, and stands ready to work with Assad to take the 65th anniversary of bilateral diplomatic ties this year as an opportunity to strive for greater achievements in China-Syria relations, Xinhua News Agency reported.

Xi said China firmly supports Syria in safeguarding its national sovereignty, independence and territorial integrity, and will provide as much assistance as its capacity allows for Syria in fighting the COVID-19 pandemic, revitalizing its economy and improving the people's well-being, so as to continuously lift China-Syria cooperation to new levels.

Some Western countries, including the US, UK, Germany and France, questioned the integrity and legitimacy of the election. US media said the Biden administration has decided to cut defense funding to the Kurdish-led Syrian Defense Forces (SDF) in Syria, and has yet to send any special envoy to the country, which experts see reflects the decline of US influence in the region.

Assad's reelection represents a complete failure of US intervention in Syrian affairs, Hua Liming, former Chinese ambassador to Iran and an expert on Middle East affairs, told the Global Times on Tuesday.

Since the anti-government protests and rebellions known as "Arab Spring" spread in Syria about a decade ago, the US used the opportunity to prop up the opposition and wage war against the Syrian government. With the Assad government's resistance and the help of Russia and Iran, Assad held his ground, and now the US-backed opposition in Syria has been all but wiped out.

Both the willingness and capability of the current US government to militarily interfere in Syria are limited, but it is expected that Washington, as a hegemonic power, will continue to suppress Damascus diplomatically and economically, some analysts said.

Media reported that US President Joe Biden has extended unilateral sanctions against Syria by one more year, according to a notice issued by the White House in early May. Gradually slapped by Washington between 2004 and 2012, sanctions include assets freezing of some people and entities and a ban on some goods and services exports to Syria.