WORLD Assaults in Syria and Iraq oust IS from border bastions

Assaults in Syria and Iraq oust IS from border bastions 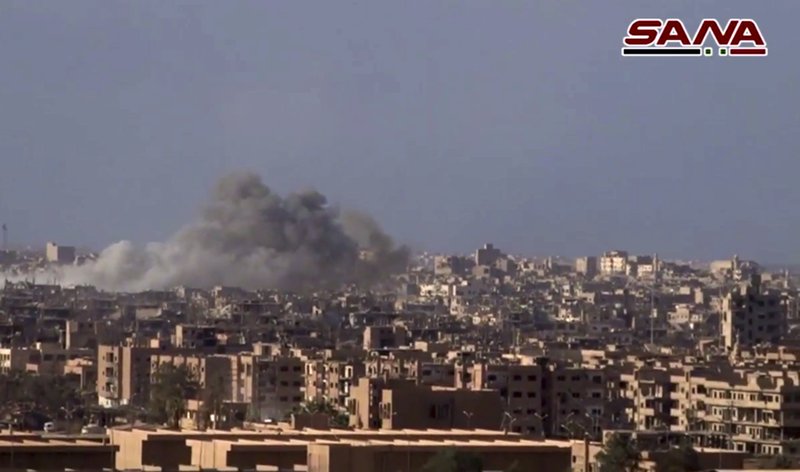 Syrian troops ousted Islamic State extremists Friday from Deir el-Zour, a major city in eastern Syria, while Iraqi forces pushed into the group’s last major town across the border in Iraq in simultaneous assaults that dealt further territorial losses to the retreating militants.

With their self-proclaimed “caliphate” crumbling, the extremists have lost almost all their urban strongholds in Syria and Iraq.

The defeats left the Syrian town of Boukamal as the only urban area still completely under IS control, along with scattered pockets of territory along the Syria-Iraq border.

Syrian troops backed by Russia and Kurdish-led forces supported by the United States are now racing toward Boukamal from opposite sides of the Euphrates River, triggering concerns that a proxy showdown could ensue between the two sides.

Both the U.S. and Russia have embedded special forces with their respective partners and are supporting their advances with airstrikes. Maj. Gen. Igor Konashenkov, a spokesman for the Russian Defense Ministry, said six Tu-22M bombers struck IS targets near Boukamal, while two Russian submarines in the Mediterranean also launched six cruise missiles at IS targets.

“With the loss of Deir el-Zour, Daesh loses its ability to lead terrorist operations by its militants who are now isolated and encircled eastern countryside of the city,” said Gen. Ali Mayhoub, declaring victory in a statement read on Syrian TV. He used an Arabic name for IS in the broadcast.

Video broadcast on state-run media showed the last moments of the ferocious fighting in Deir el-Zour, including shelling by Syrian tanks and plumes of smoke rising over the city’s mostly destroyed neighborhoods of Jamiayat and Jabiliyeh before they were liberated.

Smoke rises from an emergency service point after an airstrike at the rebel-held village of Maar Zita in Idlib province, Syria April 27, 2017. REUTERS/Ammar Abdullah

The recapture of Deir el-Zour on the west bank of the Euphrates is another victory for President Bashar Assad’s forces and his Russian and Iranian allies. Deir el-Zour, which had been divided into a government-held and an IS-held part for nearly three years, is the largest city in eastern Syria and the capital of the oil-rich province of the same name. It is also the largest city to be recaptured by the Syrian government from IS.

Mayhoub described it as the “last phase” of the military’s campaign toward the annihilation of IS in Syria. He hailed the city’s recapture as a strategic win, noting its location on a crossroads linking the country’s eastern, northern and central regions, as well as an “oil and gas reservoir” — a reference to the province.

In Iraq, troops pushed into the western neighborhoods of the town of Qaim across the border from Boukamal. An Iraqi officer in the western Anbar region said Iraqi forces have reached the border with Syria.

Iraqi Prime Minister Haider al-Abdi congratulated Iraqi forces on retaking Qaim just over a week after the operation began. In a statement from his office, al-Abadi described the victory as taking place in “record time.”

Earlier in the day, Iraqi forces retook the nearby Husaybah border crossing with Syria, according to the prime minister’s office.

Qaim, about 320 kilometers (200 miles) west of Baghdad in the Euphrates River Valley, has been used by IS to move fighters and supplies between the two countries at the height of the caliphate, when IS held nearly a third of both Iraq and Syria.

The extremist group has lost more than 96 percent of the territory it once held across both countries in 2014 and 2015, the height of the caliphate. Those losses include Iraq’s second-largest city of Mosul, which it lost in July, and Raqqa, the group’s one-time de facto capital in northern Syria, which it lost last month.

The militants, routed from one urban stronghold after another, have recently been moving deeper into Syria’s remote desert, where they are believed to be regrouping and preparing to return to guerrilla-style tactics, including scattered hit-and-run attacks and suicide bombings.

Experts agree the group’s territorial losses will not mark the end of IS, which will continue its insurgency and try to inspire attacks around the globe by disenchanted individuals.

In its weekly newsletter, the group claimed credit for the bike path attack that killed eight people in New York. Authorities identified the attacker as Sayfullo Saipov, 29, an immigrant from Uzbekistan, and the Islamic State group described him as “a soldier of the caliphate.” 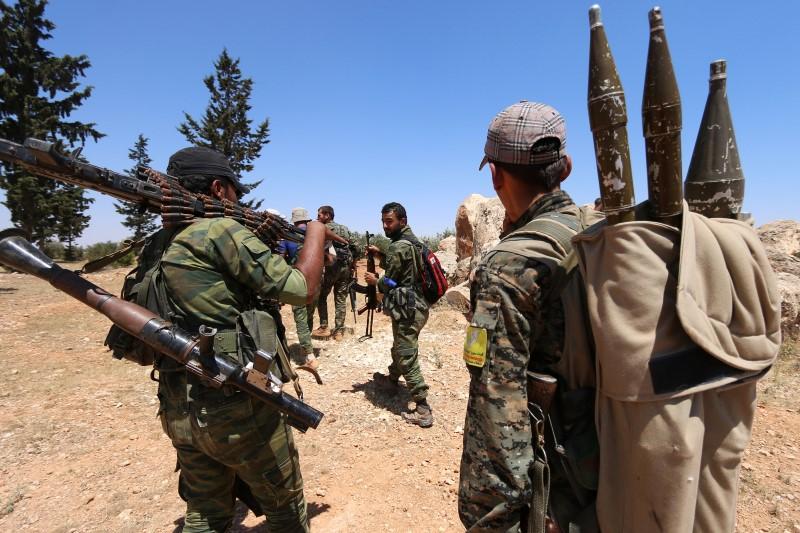 Fighters of the Syria Democratic Forces (SDF) carry their weapons as they walk in the western rural area of Manbij, in Aleppo Governorate, Syria, June 13, 2016. REUTERS/Rodi Said

While the city of Deir el-Zour was divided into parts held by the Syrian government and the militants, the United Nations was only occasionally able to deliver helicopter-dropped food aid to besieged residents estimated to number about 200,000.

Syrian government forces and their allies first broke the militant siege of their part of the city in September in a Russian-backed offensive, and have been advancing on IS positions since then.

Moscow’s involvement in the Syrian civil war since 2015 has propped up Assad’s forces and turned the conflict in his favor, while Russian mediation earlier this year launched cease-fire talks in Astana, Kazakhstan. The talks, sponsored jointly with Iran and Turkey, have brokered local deals that have significantly reduced violence in the country.