Hundreds of firefighters battled Greece's first major forest fire of the summer on Saturday, as experts warned of a "huge ecological disaster" in the nature conservation area near Athens. 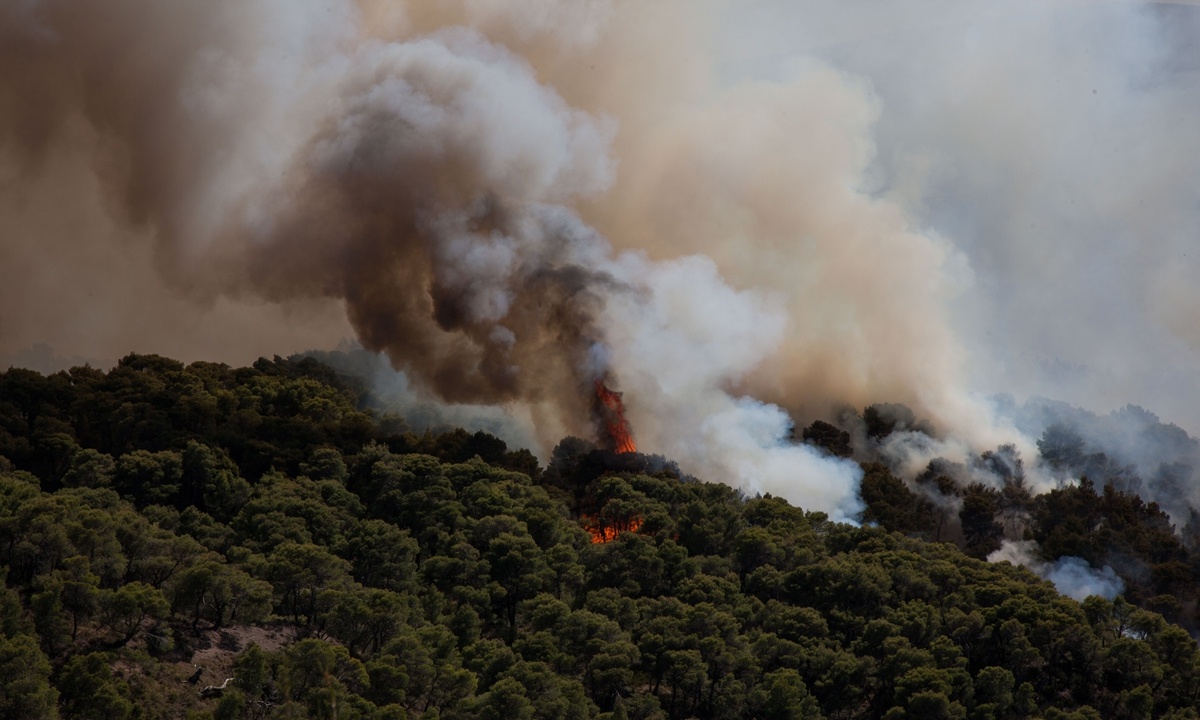 A view of the site during a forest fire in Alepochori, in Korinthos area, west of Athens, Greece on May 21, 2021 Photo: VCG

The fire, which broke out late Wednesday in the Geraneia mountains some 90 kilometers west of the capital, is "one of the biggest in the past 20 to 30 years, and has come early in the season," fire chief Stefanos Kolokouris told ANT1 television. He said better weather conditions allowed firefighters to bring the main front of the outbreak under control late on Friday, but there remain "several active and scattered" blazes.

The ANA national news agency quoted Kolokouris as forecasting that "the situation will be completely under control by tomorrow."

Government ministers were due in the Gulf of Corinth area Sunday to assess with local officials the extent of the damage and discuss financial aid.

More than 270 firefighters, backed by 16 aircraft and by the army, were fighting the blazes.

No injuries have been reported, but a number of houses have been damaged or destroyed and a dozen villages and hamlets evacuated.

The scale of the damage, notably for farmers, will only be clear once the fire is completely under control, the civil protection agency said. But experts and associations quoted in Greek media have warned of an "ecological disaster on an immense scale."

Some 54 percent of the dense and hitherto protected pine forests have been burnt, the leftist Avghi daily said. And 6.1 percent of the mountain range is part of the European Union's Natura 2000 network of nature conservation sites.

Euthymios Lekkas, professor of environmental disaster management at the University of Athens, said the fires have burnt more than 55 square kilometers of pine forest and other land, some of it agricultural.

"It's a huge ecological disaster that needs work to avoid landslides and terrible flooding in the autumn," he told ERT public television.

The civil protection agency said the blaze started near the village of Schinos next to the resort of Loutraki, apparently by someone burning vegetation in an olive grove. Smoke from the fire choked Athens with ash falling from the sky. Rescue associations sought Friday to help injured animals, burned or dehydrated from the fires, bringing food, water and first aid.

One organization, Caesar's Paradise, said birds, tortoises, hedgehogs and wild boar as well as cats and dogs had been found dead from the smoke and flames.

The Greek NGO ANIMA said it was particularly concerned because the fires erupted "in the spring, when animals give birth to their young."