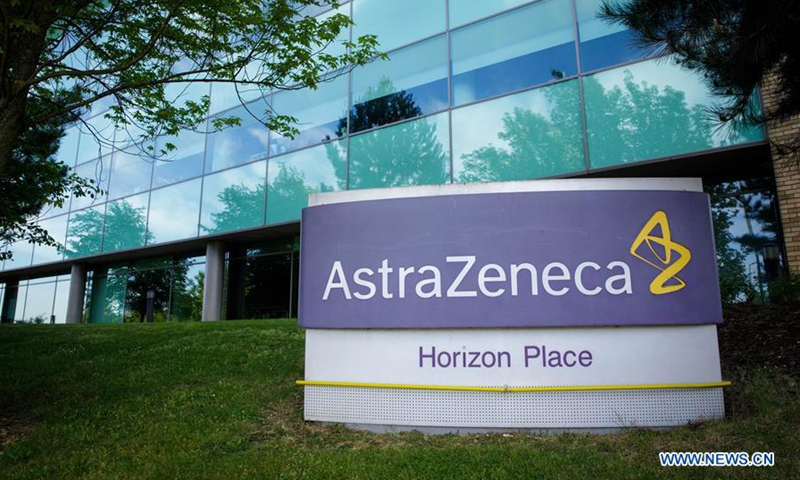 Photo taken on May 18, 2020 shows a logo in front of AstraZeneca's building in Luton, Britain. AstraZeneca, which is developing a possible vaccine against COVID-19 in partnership with the University of Oxford, on Wednesday put on hold the phase-3 trial of its vaccine following an unexplained illness in one trial participant in Britain. (Photo:Xinhua)

TOKYO, Jan. 28 (Xinhua) -- Japan said on Thursday that the British-Swedish pharmaceutical firm AstraZeneca Plc. will produce more than 90 million COVID-19 vaccine doses in western Japan, which is around 75 percent of the agreed number of jabs being produced locally.

"It's very important to have vaccine production systems in place in our country," Chief Cabinet Secretary Katsunobu Kato told a press briefing, adding that AstraZeneca the previous day had notified Japan's health ministry of its plans to produce the vaccinations here.

The Japanese pharmaceutical firm will be charged with producing 120 million AstraZeneca shots, which is enough to inoculate 60 million people, the sources said.

By March, Japan plans to import the remaining 30 million doses from AstraZeneca.

The Japanese government has made provisions for the country to receive a total of 310 million doses from AstraZeneca, Pfizer Inc. and Moderna Inc.

The total number of doses will be enough to inoculate 157 million people, more than Japan's current population of about 126 million.

The government said that inoculations will begin in late February, with medical staff dealing with COVID-19 patients being given priority, followed by the elderly and those with underlying health issues.