WORLD At 90, Native Alaska woman will be 1st counted in US Census

At 90, Native Alaska woman will be 1st counted in US Census 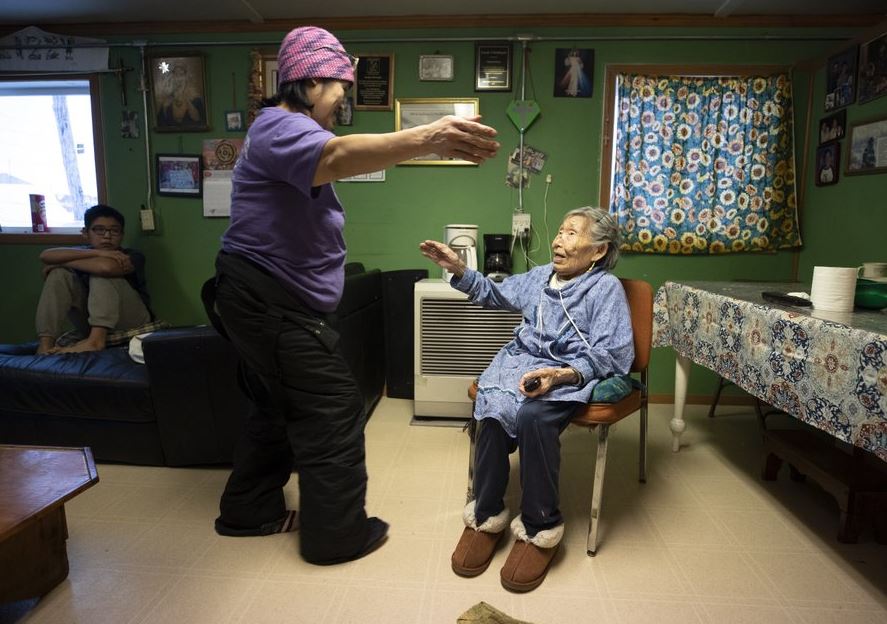 Lizzie Chimiugak, right, gets a hug from her granddaughter Janet Lawrence at her home in Toksook Bay, Alaska. (Photo: AP)

Lizzie Chimiugak has lived for 90 years in the windswept western wilds of Alaska, born to a nomadic family who lived in mud homes and followed where the good hunting and fishing led.

Her home now is an outpost on the Bering Sea, Toksook Bay, and she is about to become the most well-known woman in the tiny town, where at 90 she is considered an elder: She will be the first person counted in the US Census, taken every 10 years to apportion representation in Congress and federal money.

“Elders that were before me, if they didn’t die too early, I wouldn’t have been the first person counted,” Lizzie Chimiugak said, speaking Yup’ik language of Yugtun, with family members serving as interpreters. “Right now, they’re considering me as an elder, and they’re asking me questions I’m trying my best to give answers to, or to talk about what it means to be an elder.”

The decennial US census has started in rural Alaska, out of tradition and necessity, ever since the US purchased the territory from Russia in 1867. The ground is still frozen, which allows easier access before the spring melt makes many areas inaccessible to travel and residents scatter to subsistence hunting and fishing grounds. The mail service is spotty in rural Alaska and the internet connectivity unreliable, which makes door-to-door surveying important.

The rest of the nation, including more urban areas of Alaska, begin the census in mid-March.

On Tuesday, Steven Dillingham, director of the census bureau, will conduct the first interview. Because of federal privacy laws, the bureau won’t even confirm Chimiugak will be the first person counted, even though it’s the worst kept secret in her hometown.

After the count, a celebration is planned at Nelson Island School, and will include local Alaska Native dancers and traditional food, which could include seal, walrus, musk ox and moose.

Robert Pitka, tribal administrator for Nunakauyak Traditional Council, hopes the takeaway message for the rest of the nation is of Yup’ik pride.

“We are Yup’ik people and that the world will see that we are very strong in our culture and our traditions and that our Yup’ik language is very strong.”

For Chimiugak, she has concerns about climate change and what it might do to future generations of subsistence hunters and fishers in the community, and what it will do to the fish and animals. She plans to talk about it with others at the celebration.