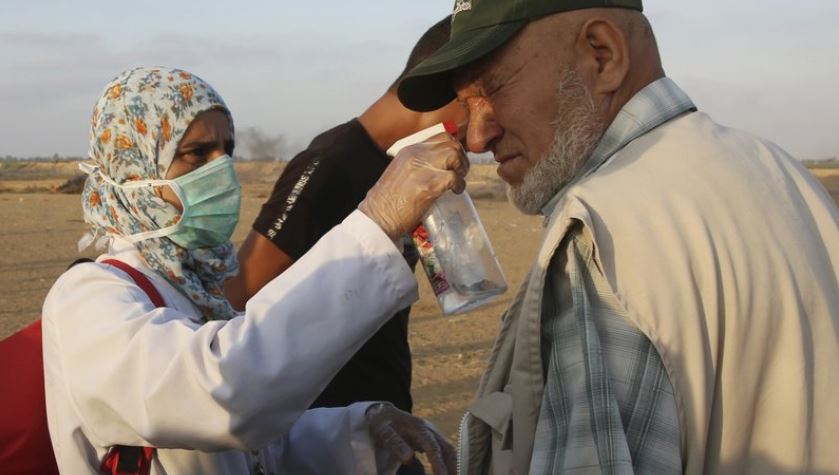 In this Friday, Aug. 24, 2018 photo, Palestinian paramedic Asmaa Qudih sprays a homemade anti teargas liquid on a man near the fence of the Gaza Strip border with Israel, during a protest east of Khan Younis, southern Gaza Strip. Treating the wounded has become dangerous mission for Gaza’s emergency workers. (Photo: AP/Adel Hana)

Each Friday, volunteer medic Asmaa Qudih goes through a tense ritual: She prays, kisses her mother’s hand and packs a bag with medical supplies as she heads off to work at the weekly mass protests along Gaza’s border fence with Israel.

Treating the wounded has become dangerous for Gaza’s emergency workers. In the past five months, three medics were killed by Israeli army fire, while dozens more, including Qudih, were hurt by live fire or tear gas canisters.

Qudih, 35, says the weekly routine is terrifying, but that national pride, religious devotion and professional ambition drive her and other medics to risk their lives.

“As long as you go to work in the field, you expect at any time to get injured or killed,” she said on a recent Friday as she prepared to head to the frontier.

Before leaving home, she inspected her red backpack, filled with bandages, sticky tape and the saline spray that soothes the effects of tear gas on the eyes and skin. She hugged her young nieces and nephews, and then solemnly kissed her mother farewell.

“She goes against my will,” said her mother, Fatma, as she showered Qudih with blessings. “But this is her decision.”

In the latest violence, witnesses said volunteer paramedic Shorouq Msameh was shot in the back Friday while standing about 300 meters (yards) from a fence during a protest east of Rafah as demonstrators tried to launch a burning tire toward Israeli territory. Msameh, who was wearing a white coat marking her as a medic, was listed in critical condition at a hospital in nearby Khan Younis.

The plight of Gaza’s medics lies at the heart of a debate over Israel’s use of force in the protests. European and U.N. officials, along with international rights groups, accuse Israel of using excessive force, citing the large numbers of civilian casualties, including medical workers. The U.N. and World Health Organization have both said Israel is obligated to allow medics to work safely.

Israel says it does not intentionally target medics and even tries to protect them but accuses militants of mixing in with the crowds. Last month, Israel said a Palestinian nurse from the group Doctors Without Borders tried to carry out a late-night cross-border shooting attack on Israeli troops. Israel apparently killed the man, but has not revealed details.

Qudih never planned to work at the protests, which are aimed in part at trying to break a blockade of Gaza imposed by Israel and Egypt to weaken the ruling Islamic militant group Hamas. The marches, led by Hamas but also driven by the desperation of Gaza residents over blockade-linked hardships, typically take place on Fridays along a perimeter fence.

On March 30, the day of the first march, Qudih walked about half an hour from her home in the southern town of Abassan to the nearest protest site to watch.

She saw thousands of Palestinians marching close to the frontier, burning tires and hurling rocks and firebombs in the direction of Israeli soldiers, including snipers behind earthen mounds on the other side of the fence. Soldiers responded with live fire and tear gas.

Fifteen people, mostly young men, were killed that day, and hundreds more were badly wounded. Protesters and medics struggled to evacuate the wounded, in many cases carrying them “improperly and hastily” to ambulances or private cars, she recalled.

Noticing the shortage of paramedics, Qudih volunteered as an emergency responder.

“Seeing the injured in front of me gave me the courage to provide them the needed service,” she said.

The job has proved to be dangerous. In five months of marches, 125 Palestinians have been killed and about 4,500 others have been wounded by gunfire, according to Gaza health officials and rights groups. Palestinian officials say the vast majority were unarmed.

Among the dead have been three paramedics, including Razan Najjar, a 21-year-old woman who also worked as a volunteer with Qudih in the Khuzaa protest camp. All wore white or fluorescent uniforms identifying themselves as medics.

Witnesses said Najjar had just helped treat a protester when she was shot in the chest. Qudih, who did not see it, said word spread quickly among her colleagues.

“We collected ourselves and hurried to the hospital, all the medics,” she said. “There was big pain and shock.”

At least 100 medical workers have been injured by gunshots, shrapnel and direct hits from tear gas canisters, according to al-Mezan, a leading Gaza-based rights group. Rescuers typically walk slowly, their hands raised, when approaching the border to treat the wounded.

Qudih herself was hit with a tear gas canister dropped from a drone on May 14, the most violent day of the marches, in which about 60 Palestinians were killed. The canister knocked her unconscious and she was briefly hospitalized to have her head stitched up.

After Najjar, a friend and neighbor, was killed, Qudih decided to work at a field hospital, far from the front lines, for three weeks. And if she felt in danger, “we would step back a little or hide ourselves behind a sand hill,” she said.

She once scolded her young nephews when she saw them at a protest. “Later, I felt embarrassed because the place was full of people and I looked as if caring for our children only.”

Her brother Loai initially objected to her going but eventually gave up. “This is who she is,” he said.

On a recent Friday, it didn’t take long for Qudih to see action. Dozens of protesters ventured toward the border fence and set tires ablaze as Israeli forces responded with volleys of tear gas and occasional live fire.

Qudih, wearing a medical coat over her full-body Islamic gown, moved quickly to treat the wounded. She darted to the front lines, sprinkling saline on people lying on the ground until paramedics carried them away. When the acrid smoke cleared, she removed her medical mask and wiped her face with tissues.

Israel accuses Hamas of using the protests as cover to carry out attacks and says it is defending its border from infiltration attempts. One Israeli soldier has been killed by a Gaza sniper.

But Israel has come under heavy criticism because of the large number of unarmed protesters who have been shot. It came under similar criticism during a 2014 war with Hamas in which 11 paramedics were killed and 24 ambulances destroyed, according to al-Mezan.

In a statement, the Israel army denied targeting medical workers but said they operate very close to the fence “and are often mixed between those carrying out attacks and those acting violently.”

It said commanders “repeatedly and emphatically” ordered their troops to avoid harming medical workers. It said troops generally stop their activities when medical personnel near the border, even though this can heighten risks to soldiers by allowing Hamas militants to approach.

“Nevertheless, despite these efforts, unintended harm to medical personnel may have been unavoidable in such volatile, challenging and chaotic situations,” it said, adding that the deaths of medical personnel are being investigated.

Professional medics from the Health Ministry, Civil Defense and the Palestinian Red Crescent Society provide most of the care. But trainees and unpaid volunteers like Qudih have played supporting roles because of the many injured, al-Mezan said.

Being unemployed, Qudih said she hopes health officials will offer her a job. Unemployment in Gaza is close to 50 percent. But she said her main motivation is her “national and religious duty” — and to remember her friend, Razan Najjar.

“We continue our volunteer work here in great part as an honor to Razan,” she said.