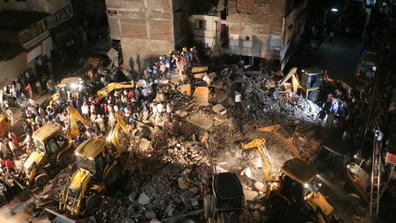 New Delhi (People's Daily) - A four-floor hotel building collapsed near a bus station in Indore, India on Saturday, killing at least 10 people, according to reports.

NDTV reported that five people may still be trapped, with many others injured.

Reports said many students were staying at the hotel.

The right side of the hotel collapsed on an auto parts shop and an ATM, according to witnesses.

Indian media said the hotel is very old and in poor condition.

Police used force to disperse a crowd which gathered near the site of the accident.

A police official said an investigation into the cause of the collapse is ongoing.