At least 10 virus cases linked to cruise ship off California 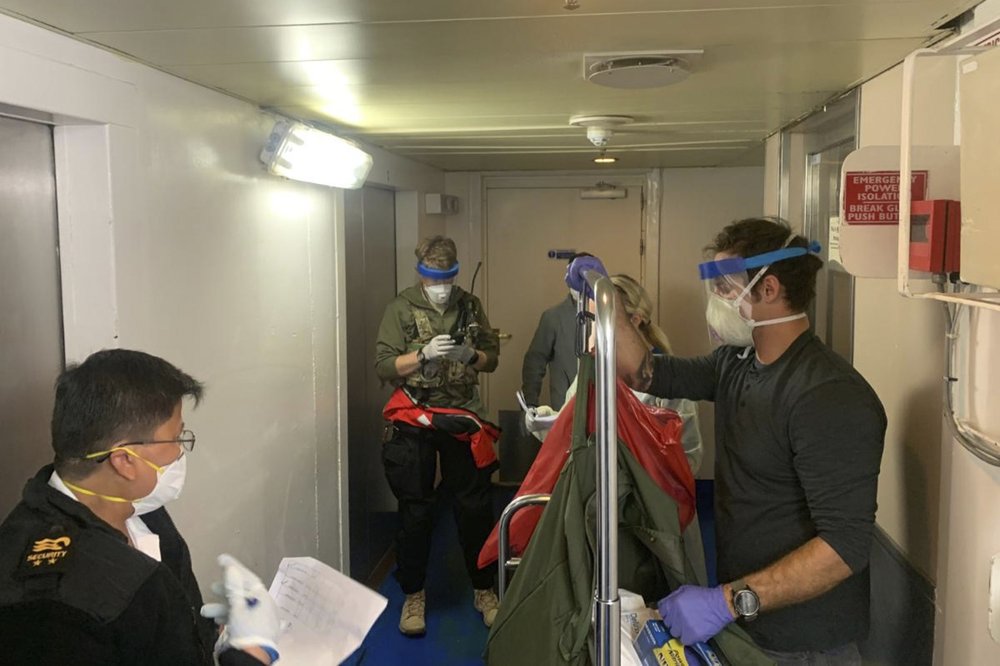 In this Thursday, March 5, 2020, photo, released by the California National Guard, Guardian Angels, a group of medical personnel with the 129th Rescue Wing, working alongside individuals from the Centers for Disease Control and Prevention, don protective equipment after delivering virus testing kits to the Grand Princess cruise ship off the coast of California. (Photo: AP)

Confined to their cabins, passengers aboard a mammoth cruise ship off the California coast awaited coronavirus test results Friday amid evidence the vessel was the breeding ground for a deadly cluster of at least 10 cases during its previous voyage.

On Thursday, a military helicopter crew lowered test kits onto the 951-foot (290-meter) Grand Princess by rope and later retrieved them for analysis as the vessel waited off San Francisco, under orders to keep its distance from shore.

Princess Cruises said 45 of the more than 3,500 people on board were tested. Results were expected as early as Friday.

Health officials trying to establish whether the virus is circulating on the Grand Princess undertook the testing after reporting that a passenger on a previous voyage of the ship, in February, died of the disease.

In the past few days, health authorities disclosed that at least nine other people who were on the same journey were also found to be infected. And some passengers on that trip stayed aboard for the current voyage.

“The ship will not come on shore until we appropriately assess the passengers,” California Gov. Gavin Newsom said Thursday. Depending on what they find, authorities could order a quarantine of all or some of those aboard.

Another Princess cruise ship, the Diamond Princess, was quarantined for two weeks in Yokohama, Japan, last month because of the virus, and ultimately about 700 of the 3,700 people aboard became infected in what experts pronounced a public-health failure, with the vessel essentially becoming a floating germ factory.

Meanwhile, the U.S. death toll from the coronavirus climbed to 14, with all but one victim in Washington state, while the number of infections swelled to over 200, scattered across about half the states. Pennsylvania, Indiana, Minnesota and Nebraska reported their first cases.

On Wall Street, stocks went into another slide as fears mounted over the potential damage to the global economy from factory shutdowns, travel bans, quarantines and cancellations of events big and small — a list that grew to include the world-famous South by Southwest arts festival in Austin, Texas, which was set to begin next week.

Worldwide, the virus has infected more than 100,000 people and killed over 3,400, the vast majority of them in China. Most cases have been mild, and more than half of those infected have recovered.

Most of the dead in the U.S. were from suburban Seattle’s Life Care Center nursing home, now the subject of federal and state investigations that could lead to sanctions against it, including a possible takeover of its management. Washington state has the nation’s biggest concentration of cases, with at least 70.

Thirty medical professionals from the U.S. Public Health Service will arrive Saturday at the nursing home to help care for the patients and provide relief to the exhausted staff, said Dow Constantine, executive in charge of Seattle’s King County.

“We are grateful the cavalry is arriving. It will make rapid change in the conditions there,” he said. The nursing home was down to 69 residents after 15 were taken to the hospital in the preceding 24 hours, Constantine said.

The state of Washington is also setting up a command center dedicated to nursing homes, Gov. Jay Inslee said.

Some major businesses in the Seattle metropolitan area, including Microsoft and Amazon, which together employ more than 100,000 people in the region. have shut down operations or urged employees to work from home. The University of Washington called off classes at its three Seattle-area campuses for the next two weeks and will instead teach its 57,000 students online. And a comics convention next week in Seattle that was expected to draw about 100,000 people was canceled.

The ship off California was returning to San Francisco after visiting Hawaii.

A Sacramento-area man who sailed aboard the Grand Princess last month during a visit to a series of Mexican ports later succumbed to the coronavirus, according to California authorities. Others who were on that voyage have also tested positive, with seven cases in Northern California and two in Canada, authorities said.

However, Mexico’s top epidemiologist denied that the passenger who died in California was on a ship that visited Mexican ports. Dr. José Luis Alomía Zegarra said the man was on a different cruise that did not stop in Mexico.

Three dozen passengers on the Grand Princess have had flu-like symptoms over the past two weeks or so, said Mary Ellen Carroll, executive director of San Francisco’s Department of Emergency Management.

An epidemiologist who studies the spread of virus particles said the recirculated air from a cruise ship’s ventilation system, plus the close quarters and communal settings, make passengers vulnerable to infectious diseases.

“They’re not designed as quarantine facilities, to put it mildly,” said Don Milton of the University of Maryland. “You’re going to amplify the infection by keeping people on the boat.”

He said whether tests confirm 45 or even two cases of coronavirus on the Grand Princess, the fallout from the ship quarantined in Japan demonstrates the urgent need to move people off the ship.

“My advice is to get people off and into a safer quarantine environment than a cruise ship,” Milton said.

Michele Smith, a Grand Princess passenger, posted video on Facebook of the helicopter that arrived at the ship. Another video showed a crew member wearing gloves and a mask and spraying and wiping a handrail.

“We have crews constantly cleaning our ship,” Smith was heard saying.

In a post, Smith said she and her husband were not quarantined and were told that only the people who had been on the Mexico voyage or those showing flu-like symptoms had to isolate themselves.

“Spirits are as high as can be under these circumstances. We are blessed to be healthy, comfortable and well-fed,” she wrote.

But in a late-night statement, the cruise line said all guests were asked to stay in their rooms while the test results were awaited, in keeping with guidelines from the U.S. Centers for Disease Control and Prevention.