WORLD At least 100 killed, 300 others wounded in twin blasts in Somalia

At least 100 killed, 300 others wounded in twin blasts in Somalia 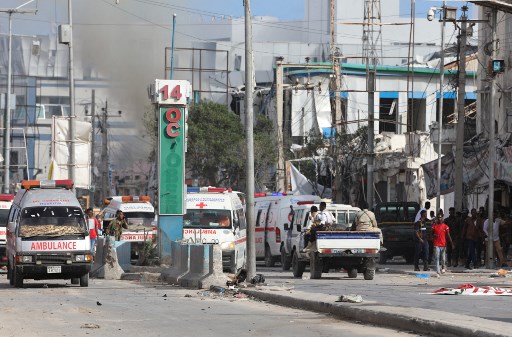 Security personnel and ambulances are stationed near destroyed and damaged buildings after an car bombing targeted the education ministry in Mogadishu on October 29, 2022. (Photo: AFP)

According to police, a vehicle packed with explosives rammed into the education ministry building located at a busy junction, followed by gunfire. Another blast later occurred in the same area.

Several government offices, hotels and restaurants are situated near the bombing site.

An unspecified number of people, including journalists and police officers, were among the casualties, Sadiq Dudishe, spokesperson of the Somali Police Force, said earlier.

The al-Qaida-linked al-Shabab extremist group, which often targets the capital and controls large parts of the country, claimed responsibility.

President Mohamud, who has declared an all-out war against the militants, vowed to step up the onslaught against the terrorists behind a series of attacks in Somalia.

The blasts came as the Somali president and leaders of the federal member states, including security officials, were meeting to discuss ongoing offensive operations against al-Shabab.

The African Union Transition Mission in Somalia in a statement called for sustained military operations against the insurgents to suppress surging terror attacks in the country.

Extending its condolences to the victims' families, the UN Assistance Mission in Somalia tweeted it "wishes a speedy recovery for those injured, and stands resolutely with all Somalis against terrorism."

The attack occurred at the same location where a truck packed with explosives blew up in October 2017, killing 587 people, in the country's deadliest attack.