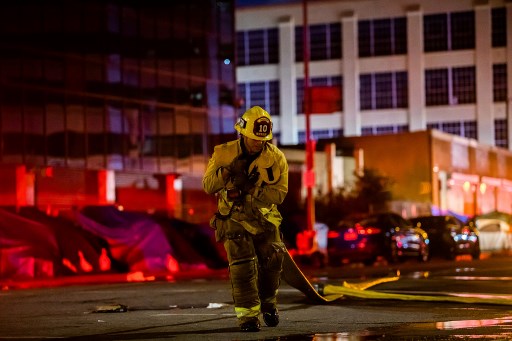 A firefighter drags a hose on San Pedro Street after a fire in a single-story commercial building sparked an explosion in the Toy District of downtown Los Angeles on May 16, 2020. (Photo: AFP)

At least 11 firefighters were injured while battling a fire in downtown Los Angeles on Saturday evening, according to the Los Angeles Fire Department (LAFD).

The department responded to a report of a fire in a one-floor commercial building at around 6:30 p.m., and an explosion occurred when firefighters entered to chase the seat of the fire. The fire later spread to several nearby structures.

Some 230 firefighters have been dispatched to the site.

The wounded firemen sustained burns and other injuries but are believed to be in stable condition.

"Tonight, 11 @LAFD firefighters were injured battling a blaze in downtown L.A. All of them are being treated for their injuries and in stable condition at this time," Eric Garcetti, LA City mayor wrote on Twitter. "Our hearts go out to their loved ones and fellow first responders. We are keeping them in our prayers."

The LAFD said the building housed a business that sold smoking and vaping paraphernalia, including butane honey oil, a highly flammable resin used for inhaling marijuana.

"The cause of this fire is of paramount concern, and it remains under active investigation," Los Angeles Fire Department Captain Erik Scott said.

Several storefronts in the area were blackened while the roof of a firetruck was scorched was covered with debris.