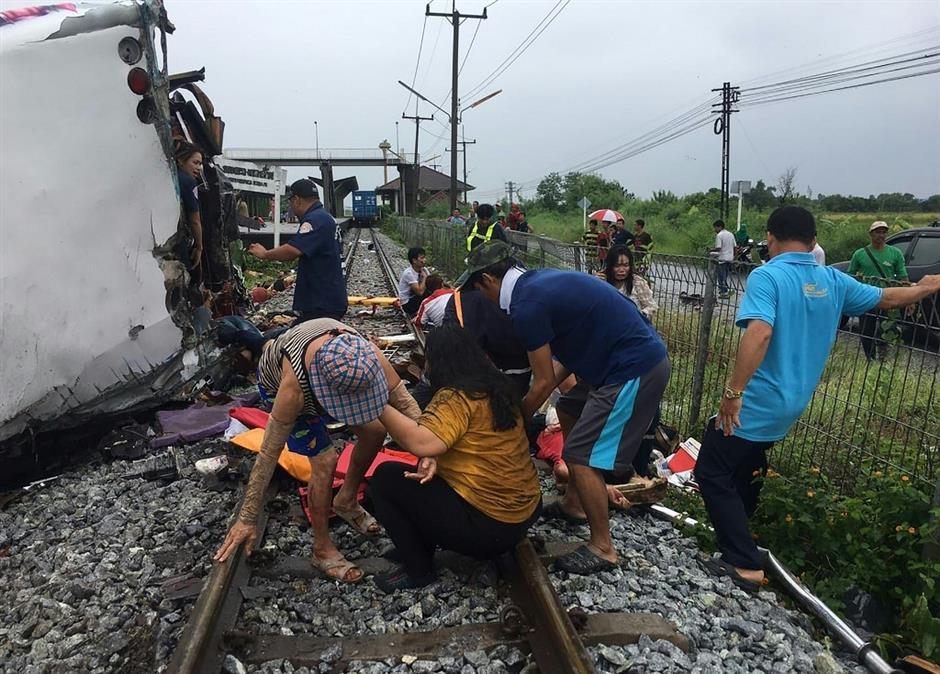 This handout photo taken and released by the Bangpakong Rescue Foundation on October 11, 2020 shows victims following a collision between a train and bus next to Khlong Kwaeng Klan railway station in Chachoengsao province, east of the Thai capital Bangkok.

At least 17 passengers were killed and more than dozen injured on Sunday when a bus collided with a train in Thailand, officials said.

The collision happened around 50 kilometers east of the capital Bangkok as the bus passengers were on their way to a temple in Chachoengsao province for a ceremony to mark the end of Buddhist Lent, said a district police chief.

Provincial governor Maitree Tritilanond told reporters that so far about 29 people were injured.

The bus was overturned on its side, the top of it ripped off, and rescue workers said a crane was needed to lift it.

The number of casualties and injured is expected to rise.

Such deadly accidents are common in Thailand, which regularly tops lists of the world's most lethal roads, with speeding, drunk driving and weak law enforcement all contributing factors.

According to a 2018 report by the World Health Organization, Thailand has the second-highest traffic fatality rate in the world.

Though a majority of the victims are motorcyclists, bus crashes involving groups of tourists and migrant labourers often grab headlines.

In March 2018, at least 18 people were killed and dozens wounded when a bus carrying people returning from holiday in northeastern Thailand swerved off the road and smashed into a tree.