WORLD At least 2 dead from 'black fungus' in Nepal

At least 2 dead from 'black fungus' in Nepal

KATHMANDU, June 7 (Xinhua) -- At least two people have died in Nepal from mucormycosis, a rare fungal infection mostly found among COVID-19 patients with diabetes, while the Himalayan country have reported around a dozen of such cases, said government and hospital officials. 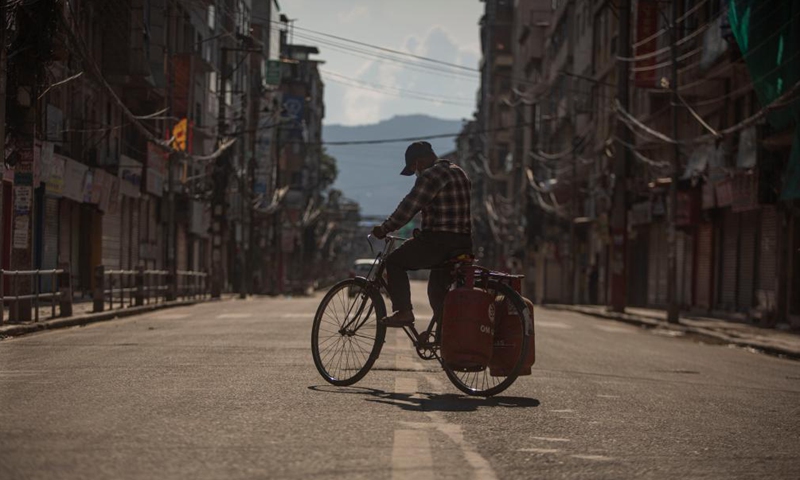 A man rides a bicycle carrying gas cylinder on the street during the lockdown imposed to curb the COVID-19 infections in Kathmandu, Nepal, May 14, 2021. (Photo: Xinhua)

Also known as black fungus, mucormycosis affects the brain, sinuses and lungs and can be life-threatening to diabetic or severely immunocompromised individuals like cancer and HIV/AIDS patients. Such cases have appeared mostly among COVID-19 patients in Nepal and neighboring India.

"A 48-year-old man from southwestern Dang district died from mucormycosis at our hospital on Saturday," Rabindra Pradhananga, coordinator of the Mucormycosis Management Committee at the Kathmandu-based Tribhuvan University Teaching Hospital, told Xinhua.

"His condition was already critical when he was admitted to our hospital. He was earlier infected with coronavirus," said Pradhananga.

Mucormycosis also claimed the life of a 65-year-old man at Seti Zonal Hospital in Nepal's southwestern Kailali district on June 3.

Dilip Kumar Shrestha, information officer of the hospital, told Xinhua that the deceased was a kidney patient and was brought to hospital for dialysis on May 31, but he was instantly hospitalized as he was almost unconscious.

"He was diagnosed suffering from mucormycosis during the test," said Shrestha. "But, he was not tested positive for COVID-19 even though his family members notified us that he developed a fever about three weeks ago."

According to doctors, among the symptoms of mucormycosis are one-sided facial swelling, headache, nasal or sinus congestion, blurred vision and pain in eye, black lesions on nasal bridge or upper inside of mouth.

Nepal's Health Ministry has got report about at least 11 people suffering from the disease.

"At least five in the Kathmandu Valley and six outside Kathmandu have been confirmed to have suffered from this ailment," said Krishna Prasad Paudel, the ministry spokesman.

According to Pradhananga, as many as five cases were confirmed at Tribhuvan University Teaching Hospital alone. "All the five were diabetes patients and recently they were also infected with coronavirus."

Even though Nepal had seen a limited number of mucormycosis cases even before the COVID-19 pandemic hit last year, the number of such patients grew rapidly among COVID-19 patients during the second wave of the pandemic that started in early April, according to doctors.

The indiscriminate use of steroids for some COVID-19 patients could be linked to mucormycosis or other fungal infections, doctors say.

Amphotericin B and Deoxycholate, drugs used by Nepali doctors for black fungus patients, are not available in the market.

The Health Ministry acknowledged the shortage of drugs for mucormycosis patients in Nepal.

"So we have just received 1,000 vials of medicines from the World Health Organization after our request. An additional 2,000 vials are in the pipeline to be received from the WHO," said Paudel, who is director of the epidemiology and disease control division under the ministry.

According to Paudel, the ministry is preparing to buy an extra 10,000 vials of the drugs from the international market for mucormycosis treatment, which can also be used against Kala Azar, also known as "black fever."