At least 20 killed in suicide blast at Pakistan election event 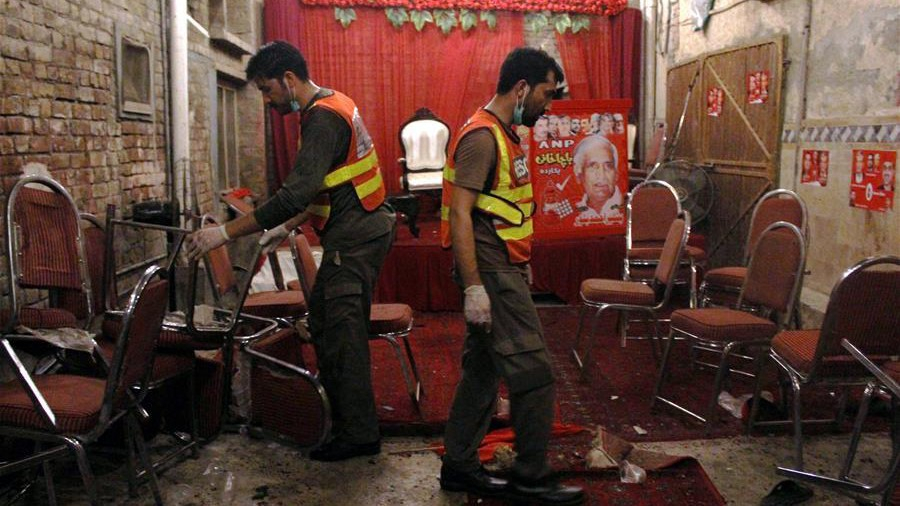 At least 20 people were killed and 63 others injured in a suicide bombing attack at a political gathering in Pakistan's northwest provincial capital of Peshawar on Tuesday night, police and hospital officials said.

Chief of Peshawar police, Qazi Jamil, said Haroon Bilour, the provincial information secretary of the Awami National Party (ANP), was among those killed.

A suicide bomber detonated his explosives-laden vest when Bilour was meeting party workers at a public meeting in the Yakatoot area, the police officer said.

The bomber managed to reach near the slain politician when party workers were celebrating his arrival with fireworks.

Police, security forces and rescue teams rushed to the site and shifted the bodies and injured to the Lady Reading Hospital.

The police bomb disposal squad said that around eight to ten kilograms of explosives and one kilogram of ball bearings were used in the attack.

No group has as yet claimed responsibility for the attack.

Bashir Bilour, the father of Haroon Bilour and a senior political leader of the ANP, was also killed in a suicide blast during an election campaign in Peshawar in 2012.

Haroon was contesting for a provincial assembly seat PK-78 in the country's July 25 general elections.

The ANP is a Pashtun nationalist party from Pakistan's Khyber Pakhtunkhwa province and had representation in the provincial assembly, and also in the upper house and the lower house of the country's parliament.

Leaders of all major political parties condemned the attack and urged authorities to ensure the security of politicians contesting the elections.

The chief election commissioner of Pakistan called the attack a conspiracy to disrupt the process for the free and fair elections.