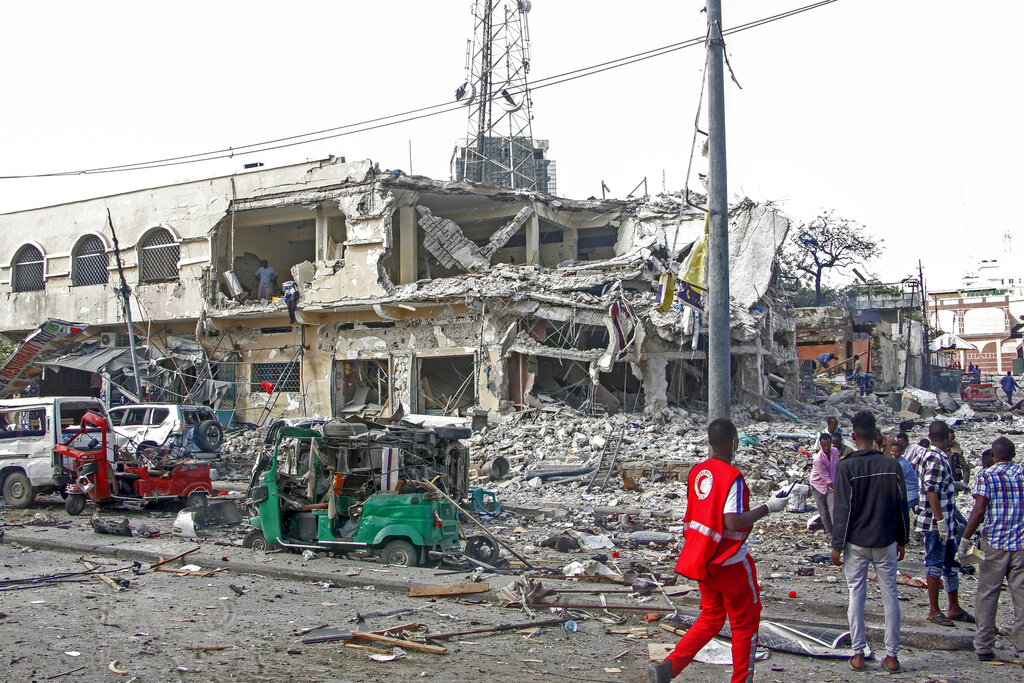 People observe a destroyed building and vehicles at the scene of a two car bombs attack in Mogadishu, Somalia, Saturday Oct. 29, 2022. (Photo: AP)

MOGADISHU, Oct. 29 (Xinhua) -- At least three people have been confirmed dead and several others wounded in twin blasts in the Somali capital, Mogadishu on Saturday, witnesses and the police said.

A police officer told Xinhua on the phone that scores of civilians including a journalist were among the casualties in the latest attack at K-5 junction which is home to government offices, hotels and restaurants.

"So far three people have been killed and several others wounded in the attack that targeted the ministry of education. Fighting is still going on and the death toll could rise since the situation is tense," a police officer who declined to be named said.

Sadiq Dudishe, Spokesperson of the Somali Police Force said an unspecified number of people were killed, including a journalist and a district police officer.

Witnesses said the fighters stormed the Ministry of Education building located near scene of the Oct. 14, 2017 deadly attack where a massive car bomb killed 587 people that ranks as the deadliest ever attack involving the use of improvised explosive devices.

"Plumes of black smoke could be seen billowing from the scene. The number of casualties will be more since there were several people where the attack took place," Hassan Omar, a witness said.

The blast comes as the Somali President Hassan Sheikh Mohamud and leaders of the federal member states including security officials were meeting in Mogadishu to discuss the ongoing offensive operations against al-Shabab.

No group has claimed responsibility for the attack yet, but the al-Shabab group frequently targets government and civilian buildings across the country.