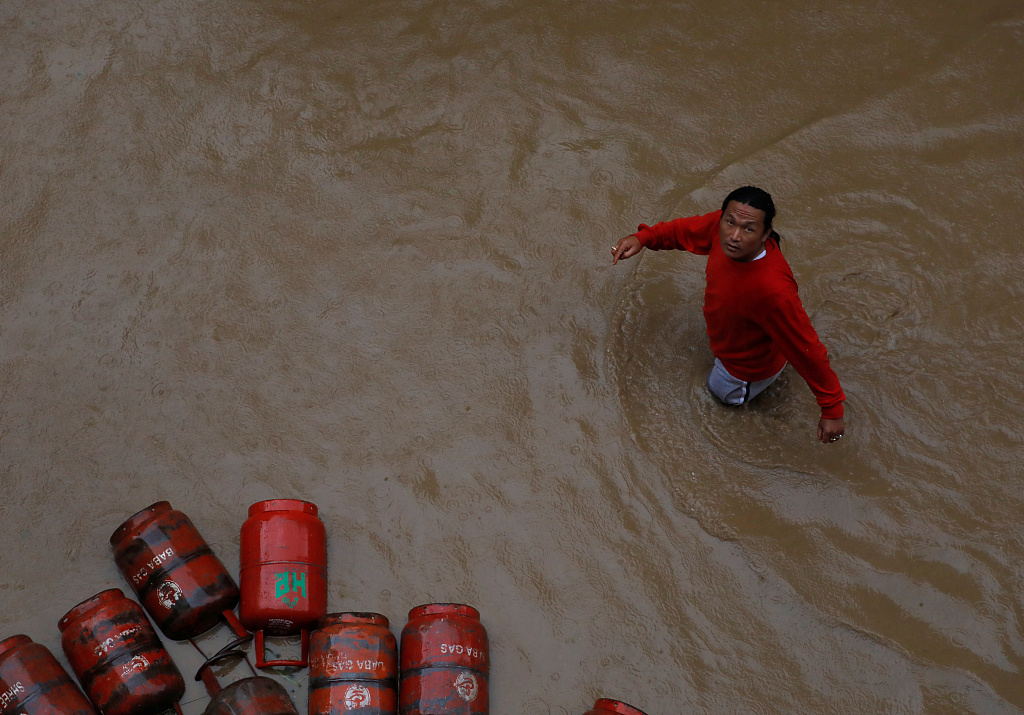 A man walks past gas cylinders in a flooded colony in Kathmandu, Nepal, July 12, 2019. (Photo/VCG)

KATHMANDU, July 13 (Xinhua) -- At least 32 people have been killed, 12 others sustained injuries and 17 persons missing due to landslides and floods as monsoon rains lashed Nepal since Thursday evening, the country's Ministry of Home Affairs said here on Saturday.

Twenty-one districts in Nepal have been hit hard due to the floods and landslides which were caused by the incessant rains.

TV footages showed that rescue teams have been evacuating people from flooded houses to rubber boats in Kathmandu where roads were flooded.

Scores of families carrying their belongings on their heads waded through waist-deep water in many parts of the country including the southern Terai plains.

Nepal Police Headquarters said that 831 persons have been evacuated as of Saturday afternoon.

"Altogether 27,830 police personnel are on the standby for rescue in different parts of the country," Senior Superintendent of Police at the Nepal Police Headquarters Ramesh Thapa told Xinhua.

Meanwhile, a meeting of the Central Disasters Relief and Rescue Committee under the Ministry of Home Affairs took place in Kathmandu on Saturday to start the rescue, relief and rehabilitation operation.

During the meeting, Home Minister Ram Bahadur Thapa urged government secretaries and chiefs of security agencies to expedite rescue, relief and rehabilitation operation in coordination with the local governments, according to an aide to the home minister.