At least 35 dead in Kentucky flooding 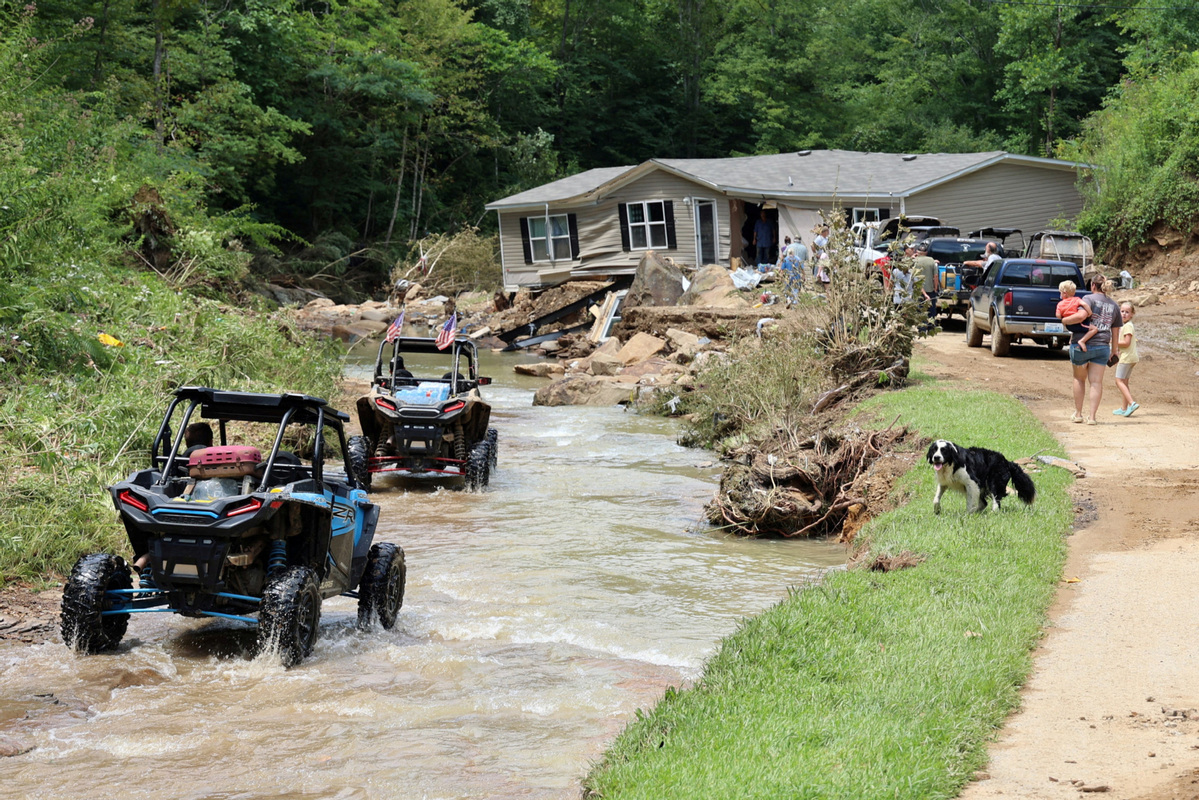 ATV drivers ferrying generator fuel and water drive around Jessica Willett's home, which was torn from its foundations during flooding and left in the middle of the road, along Bowling Creek, Kentucky, US July 31, 2022. [Photo/Agencies]

At least 35 people have died in flooding in Kentucky, and the governor says hundreds may be missing as more rain fell on Monday, with predicted for Tuesday.

There are "hundreds of unaccounted for people" at a minimum, Kentucky Governor Andy Beshear said at a news conference Monday. "If things weren't hard enough on the people of this region, they're getting rain right now," Beshear said during the briefing.

In Knott County, 16 people have been killed, including four siblings — ages 8, 6, 4 and 2 — who were swept away in the water, according to family members.

More than 600 people have been rescued by aircraft and boat since the flooding began last week, Beshear said. More than 12,000 customers remained without power, many because their homes and businesses have been destroyed or aren't fit for habitation. Shelters were housing at least 300 people.

The governor believes recovery crews are "going to be finding bodies for weeks". He told NBC News on Sunday that "many of them (were) swept hundreds of yards, maybe a quarter-mile-plus from where they were last".

A new flash flood watch was issued for eastern Kentucky for Monday evening through Tuesday morning. Forecasts predict thunderstorms and potential rainfall rates of 1 to 2 inches (2.5 to 5 centimeters) per hour.

Temperatures are expected to rise later this week, reaching mid-80 F and near 90 F on Wednesday and Thursday, according to the National Weather Service. Heat indices — the temperature it feels like when heat is combined with humidity — are expected to peak around 100 degrees in some places, leaving rescue workers and displaced people facing sweltering heat as thousands of customers remain without power.

The floods were unleashed last week when 8 to 10.5 inches of rain fell in just 48 hours in parts of eastern Kentucky, southern West Virginia and western Virginia.

Other cities across the US, such as St Louis, Missouri, and Las Vegas, Nevada, also have been hit hard by flooding over the last week. In June, Yellowstone National Park, one of the country's best-known national parks, closed because of flooding that swept away entire roads.