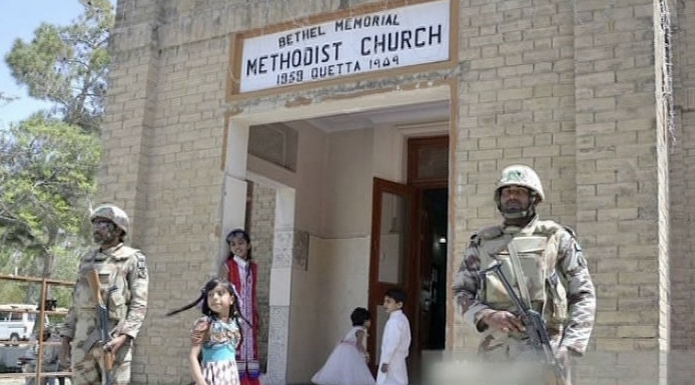 At least seven people were killed and 25 others injured in an attack at a church in Pakistan's southwestern city of Quetta on Sunday, Pakistan Today reported, citing an official.

Four suicide attackers struck the Bethel Memorial Church located at the Zarghoon Road area of Quetta, said Sarfraz Bugti, Interior Minister of Balochistan Province, adding that the attack happened when over 300 people were praying inside.

According to initial reports, an explosion took place, which was followed by an intensive exchange of gunfire.

The minister said that one of the attackers was shot dead by police guards near the main entrance of church while another detonated a suicide vest inside the church. Two of the attackers fled as security forces advanced.

Police, rescue teams and security forces rushed to guard the church and the authorities have declared this as an emergency in all nearby hospitals.

Ministry of Foreign Affairs Spokesperson Mohammad Faisal condemned the attack on Twitter, saying the country's resolve against terrorism cannot be deterred by these "cowardly acts".

As of now, no group has claimed responsibility for the attack.