At least three dead in Shabaab attack on Mogadishu hotel

At least three people including two civilians were killed in a jihadist attack Sunday on a Mogadishu hotel, a Somali security source said, adding that the death toll could rise with assailants still inside. 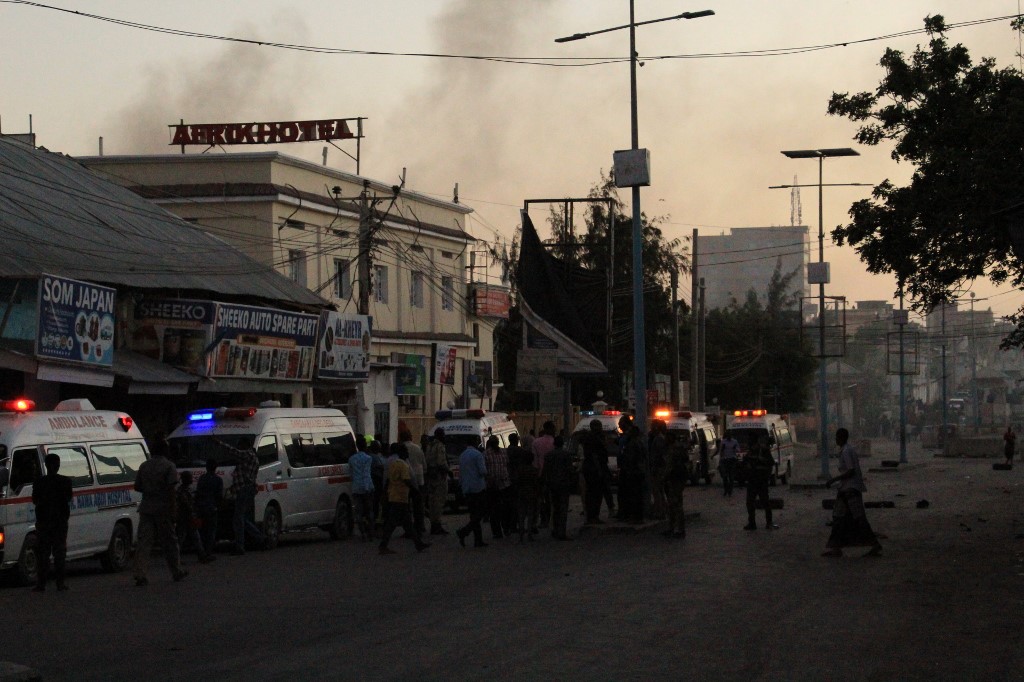 Ambulances wait near the site where a bomb blasted in Mogadishu, Somalia, on January 31, 2021. Armed men attacked a hotel in central Mogadishu following a car bombing at the entrance, according to witesses and Somali police who say the Shebab jihadist group claims responsibility. (Photo: AFP)

Another six civilians were wounded in the attack, senior national security official Mohamed Dahir told AFP. Two civilians and a security guard were confirmed dead, "but the death toll could be higher", he added.

The attack began Sunday afternoon when a car bomb exploded at the entrance of the Hotel Afrik, located in the centre of the Somali capital and near the city's airport. Gunmen then stormed the hotel, exchanging fire with security personnel.

Al-Shabaab claimed responsibility for the attack in a brief statement, saying: "The mujahidin stormed in an ongoing operation inside Hotel Afrik where members of the apostate team are stationed."

The hotel is frequented by Somali officials, members of the security forces and community leaders.

"We believe there are three terrorists trapped inside a room in the downstairs of the main building," Dahir said.

"But unfortunately there are still civilians trapped inside the building even though many of them including senior military officials have been rescued and extracted from the building," he added.

Two witnesses said they saw three bodies, those of two men and a woman.

A police spokesman, Sadik Dudishe, said that police "immediately entered the building" at the onset of the attack, rescuing "most" of those inside, adding however: "The operation is still going on."

An AFP journalist reported earlier that Somali soldiers quickly surrounded the hotel and blocked off access to it.

Witnesses confirmed a massive explosion followed by smoke after a car struck the hotel entrance at great speed, followed by gunfire.

"There was another blast after the first big one," said Osman Saadaq, a witness.

The Al-Qaeda-linked Al-Shabaab has been waging a violent insurgency across the Horn of Africa country seeking to unseat the internationally backed government in Mogadishu.

They were driven out of Mogadishu by government forces backed by 20,000 African Union peacekeepers in 2011.

But the group still controls swathes of territory outside the cities, from where they launch attacks against government targets, as well as occasionally crossing the border to carry out raids in Kenya.

Al-Shabaab has ramped up the intensity of its attacks in Kenya in recent years, including several major assaults as far as the capital Nairobi, which have left nearly 300 dead.