Queen Elizabeth led a ceremony on Sunday to remember those killed and wounded in conflict, with many in Britain marking it at home after the service was scaled back to comply with coronavirus restrictions. 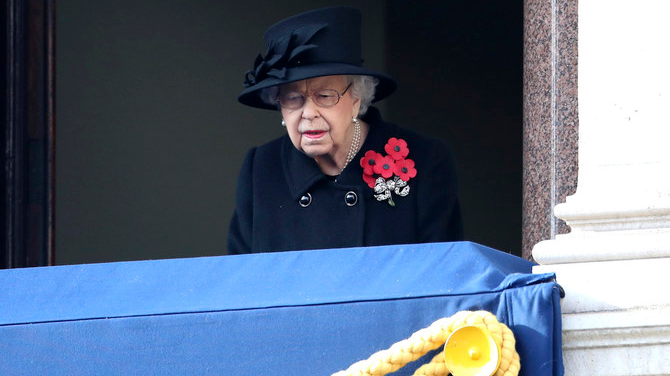 Britain's Queen Elizabeth II stands on the balcony of the Foreign Office, during the Remembrance Sunday service at the Cenotaph, in Whitehall, London, Sunday Nov. 8, 2020. /AP

With the service closed to the public, members of the royal family, politicians and veterans marked the annual Remembrance Sunday standing far apart as they observed a two-minute silence.

Prince Charles, Prince William, Prime Minister Boris Johnson and others laid wreaths at the Cenotaph in London's Whitehall as the Queen watched from a balcony at the nearby Foreign, Commonwealth and Development Office building.

Usually thousands of people travel from across the country to watch the ceremony but the growing spread of the coronavirus put paid to that.

Also missing was Prince Harry, who stepped down as a working member of the royal family and now lives in the United States, but he used a podcast to mark the day.

"Remembrance day for me is a moment for respect and for hope. Respect for those who came before us and hope for a safer world," he said. "The act of remembrance is a profound act of honour."