WORLD At the spelling bee, the most common sound is the toughest

At the spelling bee, the most common sound is the toughest 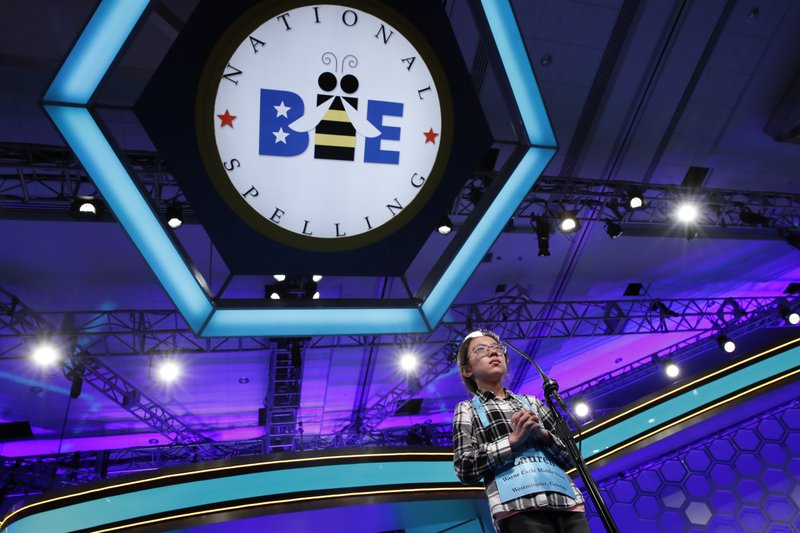 The word that knocked runner-up Naysa Modi out of last year’s Scripps National Spelling Bee was “Bewusstseinslage” — one of those flashy, impossible-sounding German-derived words that make the audience gasp when they are announced.

Naysa believes the seemingly mundane word that knocked her out the year before was just as intimidating, if not more.

For the spellers who will gather starting Monday at a convention center outside Washington for this year’s bee, an unremarkable sound is the cause of their angst, their sleepless nights, their lifelong memories of failure. It’s the most common sound in the English language, represented in the dictionary by an upside-down “e,” a gray chunk of linguistic mortar.

To the uninitiated, it sounds like “Uh.” Spellers know it by its proper name: the schwa.

“It’s the bane of every speller’s existence,” Naysa said. “It’s what we hate.”

The schwa falls only on unstressed syllables. Any vowel can make the sound, and so can “y.” Sometimes a schwa can show up where vowels fear to tread: Think of the second syllable of the word “rhythm.”

And only in English can a single sound be so versatile.

“It’s why there are spelling bees in English and no other language,” said Peter Sokolowski, a lexicographer at Merriam-Webster who attends the bee regularly.

In Romance languages like French and Spanish, vowels are predictable. The same letters rarely make different sounds. Sokolowski cites the example of “banana” — in Spanish the three “a″ sounds are identical, but in English, because the stress falls on the middle syllable, the first and third “a″ sounds become schwas.

And because English absorbs words from every language, words with obvious spellings in their native tongues can become mysterious.

Linguistic experts like Sokolowski or ex-spellers like Scott Remer, who placed fourth in 2008 and later wrote a book, “Words of Wisdom,” to guide high-level spellers, can sense the unease provoked by an unfamiliar schwa.

“You can usually tell when they are testing the kids on the schwa and you can often tell when the kids are taken aback by it,” said Remer, 25, who coaches spellers in addition to his day job at the Council on Foreign Relations. “The vast majority of instances where kids misspell is due to the schwa.”

Naysa, a 13-year-old from Frisco, Texas, who will be back for one last crack at the bee this year, got dinged out in seventh place two years ago by the word “marasmus,” which means a condition of chronic undernourishment. She went with an “e″ for the first vowel. If the word were spelled that way, the pronunciation would be exactly the same.

For a while, she would wake up at night thinking about it.

“Over time, it will still hurt but you stop thinking about it as much, but when I think about it, it really, really bugs me, because it’s obviously ‘m-a,’ ” Naysa said. “How could I be so stupid?”

Spellers have a variety of techniques to deal with the schwa, but nothing is foolproof.

Sylvie Lamontagne, a 16-year-old two-time finalist who is coaching five spellers in this year’s bee, said she advises her students to start with the language of origin as they assess which vowel is most likely.

“Greek words have ‘o,’ Latin words have ‘i,’ but it doesn’t always hold up and it adds another layer of confusion,” Sylvie said. “It’s just kind of a mess.”

“People don’t like to talk about it,” said Anisha, who’s 13 and will compete again this year, “but sometimes the best way is just to memorize the word.”

Schwas can be even more confusing when Scripps, in the later rounds of the bee, digs into the dictionary for words with languages of origin that are obscure or unknown, or words that originated as trademarks.

“As a general rule, often trademarks and words from unknown languages that might look shorter, might look easier, are actually way hard,” Sylvie said. “You’re sort of in the dark. You have to do what you can to put it together with very limited information.”

The schwa is a big reason why, for all the talk about pre-bee favorites like Naysa, there are no sure things. For every Vanya Shivashankar, who in 2015 claimed a title that seemed preordained, there is a Karthik Nemmani, last year’s previously unheralded champion who got in through the bee’s new wild-card program. The wild cards, who pay their own way into the bee rather than winning regional competitions and earning sponsorships, are back this year, and the bee is bigger than ever with 565 competitors.

The field is deep, too, with 11 spellers who made last year’s prime-time finals returning. Naysa believes luck is a bigger factor than anyone realizes in the final rounds and bristles at the suggestion the title is hers to lose. Spellers believe they are competing not against each other, but Merriam-Webster’s Unabridged dictionary, and somewhere in that volume is a maddening schwa for everyone.