WORLD At the US-Mexican border, migrants give up hope of crossing

At the US-Mexican border, migrants give up hope of crossing 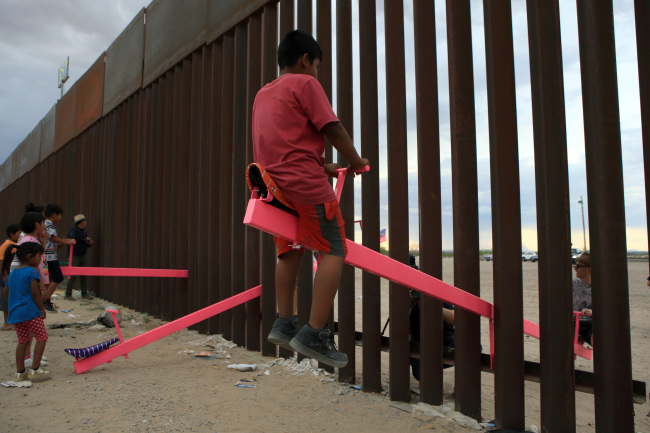 American and Mexican families play with a toy called "up and down" (Seesaw swing) over the Mexican border with US at the Anapra zone in Ciudad Juarez, Chihuahua State, Mexico on July 28, 2019. (Photo: AFP)

In muddy makeshift camps in the Mexican border city of Ciudad Juarez, more than 1,000 migrants had waited for weeks for a chance to request asylum in the United States, enduring cold nights and long days of uncertainty.

Frustrated, many are giving up and clearing out.

Authorities say as of last week, there were still about 1,400 migrants, most of them from southwestern Mexico, holding out hope under tents and tarps not far from the Rio Grande.

But on Thursday, only about 700 remained. The others grew tired of the near-freezing temperatures at night and the seemingly fruitless quest to be heard by US officials.

Local associations convinced several families to head to shelters or hotels when the mercury started to plummet.

Some instead made their way across the river, without any idea if they would succeed.

And still others opted to remain -- they are afraid to lose their place on the murky wait list system they themselves created to convince US border agents to take them in order of their arrival.

"They won't let us proceed unless we hand them our slips to show them we have indeed been waiting," said Rosa, who keeps up the list on a daily basis.

Every night, the men and women at the camp keep watch on the comings and goings on the bridge crossing the Rio Grande -- the natural, international border -- to make sure new arrivals don't jump the queue.

- 'The cartels threatened us' -

According to a survey recently led by several universities in northern Mexico, 60 percent of displaced people in camps wait their turn in tents, but more than a quarter are sleeping in the open air.

Many migrants say they are fleeing violence in their hometowns.

"The cartels threatened us and took our land," said one man from Guerrero state.

"At first, they asked us for money," he explained. "But when we could no longer pay, they took our house. They gave us two weeks" to get out, he added.

Officials in Ciudad Juarez -- once known as the "murder capital of the world" -- are trying to be flexible about the influx of migrants.

"We understand that US authorities administratively can't process all of these requests," said Enrique Valenzuela, who works for a Chihuahua state agency tasked with local population issues.

"Most of these people are alleged victims in some way," he said.

"They say that they either have been threatened for some reason -- themselves or their families -- or they have either lost a loved one or a neighbor," he added.

"We cannot impede their entrance and it would be wrong for us to do so."