At Trump’s India rally, Modi bets on bolstering his image 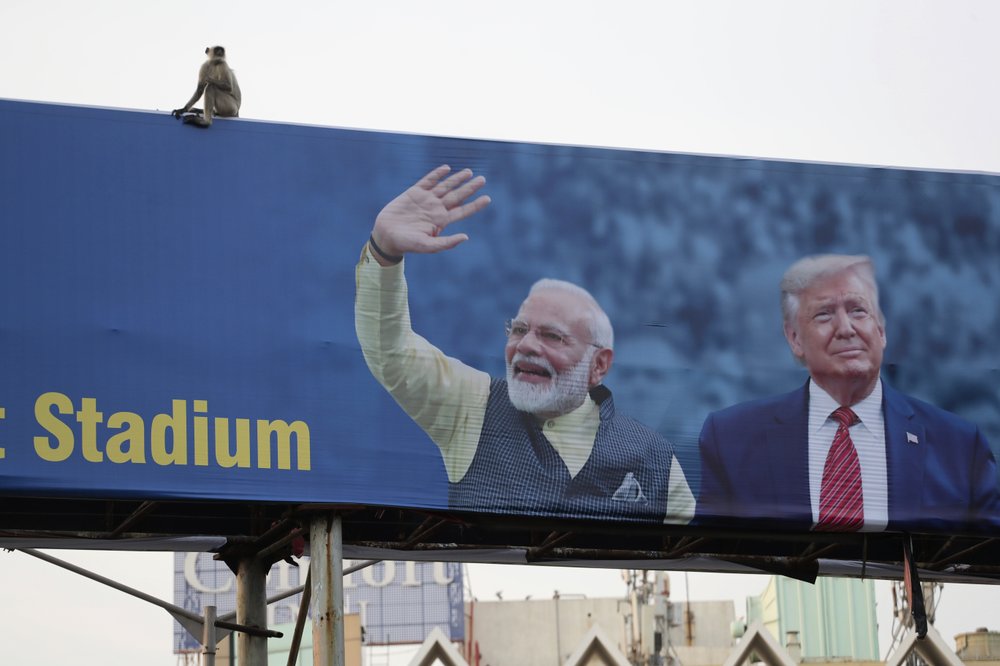 In this Feb. 19, 2020, file photo, a monkey sits on a hoarding welcoming US President Donald Trump ahead of his visit to Ahmedabad, India. (Photo: AP)

A festive mood has enveloped Ahmedabad in India’s northwestern state of Gujarat ahead of Prime Minister Narendra Modi’s meeting there on Monday with President Donald Trump, whom he’s promised millions of adoring fans.

The rally in Modi’s home state may help displace his association with deadly anti-Muslim riots in 2002 that landed him a US travel ban. It may also distract Indians, at least temporarily, from a slumping economy and ongoing protests over a new citizenship law that excludes Muslims. But beyond the pageantry and symbolism of the visit, experts expect little of substance to be achieved for either side.

“For Modi, Trump’s visit to India offers a useful distraction from the domestic political tumult playing out across the country,” said Micheal Kugelman, deputy director of the Asia Program at the US-based Wilson Center. “I don’t think the visit will have much impact on domestic politics in either country.”

To welcome Trump, who last year likened Modi to Elvis Presley for his crowd-pulling power at a joint rally the two leaders held in Houston, the Gujarat government has spent almost $14 million on ads blanketing the city that show them holding up their hands, flanked by the Indian and US flags.

It also scrambled to build a wall to hide a slum along a road that Trump and first lady Melania Trump will take, caught stray dogs, planted exotic trees and is rushing to finish a cricket stadium in time for Trump’s arrival. The buzz around the event has resonated in Ahmedabad, a city of 7.2 million people divided between those proud of Modi, a Gujarati tea seller’s son who went on to hold India’s highest office, and those who angrily remember his term as the state’s chief minister, when at least 1,000 people were killed in the anti-Muslim riots.

Trump has said Modi has promised between 6 million and 10 million people will turn up for their rally in the city, although authorities expect closer to 100,000.

A big trade deal that both sides had hoped to sign also seems increasingly unlikely.

India has tried to advance cooperation on a range of defense and strategic issues with the US, but Indian tariffs remain a major sticking point.

Still, with India’s economy registering its worst slowdown in a decade, expectations of a trade deal remain high in India.

“It would be embarrassing if the two countries cannot manage to strike a modest deal,” said Joshua White, who served in former President Barack Obama’s White House as senior adviser and director for South Asian affairs at the National Security Council.

The India-US relationship, apart from trade tensions, has also experienced strain because of Washington’s desire to use India as a geopolitical buffer with China, while at the same time some members of Congress are criticizing its actions in disputed Kashmir.

A recent letter from four senators to US Secretary of State Mike Pompeo condemned the Modi government’s decision to scrap the semi-autonomy and statehood of Kashmir, India’s only Muslim-majority region, last year.

Trump has offered to mediate between India and Pakistan, both of which claim Kashmir, an offer India has repeatedly rejected.

While experts aren’t optimistic that any substantial gains will be achieved by the visit, they see plenty of parallels between the leaders’ planned rally in Ahmedabad, dubbed “Namaste Trump,” which translates to “Greetings, Trump,” and last year’s “Howdy Modi” event in Houston.

With flashy Bollywood musical and dance numbers, the Houston rally was the Indian-American diaspora’s grand welcome to Modi after his landslide reelection victory in 2019. But beneath the extravaganza, it was a political rally for the two nationalist leaders, organized by a nonprofit with Hindu nationalist links.

This grand style of event, likely to be replicated in Ahmedabad, could provide Trump an opportunity to appeal to Indian-American votes in the US presidential election, experts say.

“By participating in such a huge event,” Kugelman said, Trump can go back home and “make a pitch to Indian-Americans, many of whom originally hail from Gujarat.”

For Modi, however, the visit could mean more.

Modi has long been trying to bolster his image as a respected leader on the world stage. The visit by Trump could be viewed as endorsing his Hindu nationalist policies that have contributed to a slew of recent losses by his party in state elections.

“President Trump’s visit will be taken as a personal vote of confidence in Modi, and a signal that the United States is willing to overlook his party’s increasingly assertive and troubling majoritarianism,” White said.

Modi has previously hosted Japanese Prime Minister Shinzo Abe and Israeli Prime Minister Benjamin Netanyahu in his home state while pitching the implementation of Gujarat’s development model across India. Bringing world leaders to Gujarat is a tactic to “pull crowds in his home turf,” said Ajay Umat, a senior journalist in Gujarat who has reported on Modi for the last 30 years.

“He loves to make an exhibition,” Umat said. “What better place than his own state?”

Muslim leaders and human rights groups say Modi, when he was the state’s chief minister, did little to stop the 2002 anti-Muslim riots, a charge he has denied.

Suspicions that Modi quietly supported the riots led the US to deny him a visa, which has since been reversed. While government investigators eventually ruled there was no evidence to charge him, the shadow of the riots continues to hang over Ahmedabad.

A few days before the two leaders’ visit, Salim Mohammad sat in his modest house in Naroda Patia, a dingy Muslim-majority neighborhood where 97 people died in the riots. Mohammad said Modi’s invitation to the US president to a city which experienced communal riots “under his watch” was like a “reopening of wounds.”

“But I am not surprised,” Mohammad said. “After all, both leaders are of the same ideology. They both promote divisive politics.”