WORLD At UN, a plea for peace in Syria as crisis enters 10th year

At UN, a plea for peace in Syria as crisis enters 10th year

By HONG XIAO at the United Nations | chinadaily.com.cn

A Chinese envoy to the United Nations called on the international community on Wednesday to stop the crisis in Syria as it enters a 10th year, causing tremendous suffering for the Syrian people. 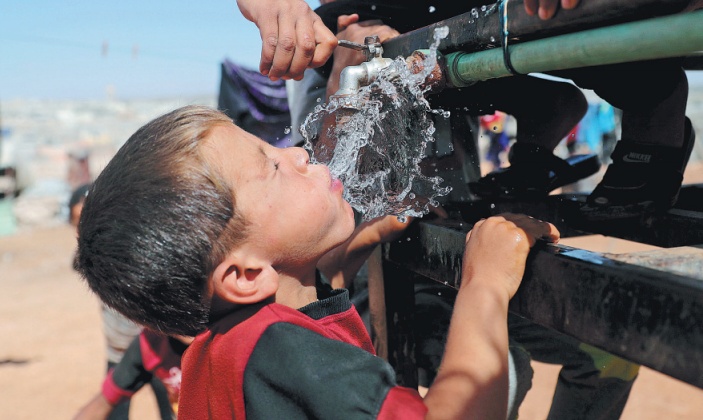 A boy drinks water at Syria's Atmeh camp near the Turkish border on Saturday. More than 80 percent of Syrians are estimated to be living below the poverty line. (Photo: Agencies)

According to UN Special Envoy for Syria, Geir Pedersen, preparations are being made to convene the third session of the Small Body of the Syrian-owned, Syrian-led, UN-facilitated Constitutional Committee in Geneva on Aug 24.

The constitutional reform talks between Syria's government and opposition leaders will offer an opportunity to reconcile differences and establish a social contract with people across the country, who are desperate for progress after more than nine years of war, the special envoy told the Security Council at a virtual meeting on Syria.

Geng Shuang, deputy permanent representative of China to the UN, reiterated China's position on the Syrian issue that it "must be addressed in a holistic way, taking into account political, security, counterterrorism, economic and humanitarian factors in an integrated manner", he said.

To address the issue under the current situation, Geng pointed out the political process must be accelerated, adding it is the only way to achieve lasting peace and stability in Syria.

Geng said the parties concerned should actively and pragmatically participate in and advance the inclusive political dialogue within the framework of the Constitutional Committee.

"We hope to see the parties concerned strive for an early solution that fits Syria's national conditions and takes into account the legitimate concerns of both sides," he said.

He underscored that the UN should play its role as the main channel for mediation toward a "Syrian-led, Syrian-owned" political process while the sovereignty, independence, unity and territorial integrity of Syria be safeguarded. He called on all parties to demonstrate political will and bridge differences through dialogue and consultation so that the meeting could go smoothly and achieve positive results.

He added that China appreciates the active support from Russia and other countries to the UN-led process through their own efforts.

To address the issue, Geng emphasized the security situation in Syria should be substantially improved.

As there are still many terrorists and extremists in the Idlib region, launching frequent attacks and harming civilians, Geng said all parties must stick to a unified standard and strengthen coordination in counterterrorism actions.

"As Mr Pedersen proposed, more effective, cooperative and targeted counterterrorism actions must be in place to promote peace and stability in Syria and the region," he said.

"Russia and Turkey conducted regular joint patrols along the M4 highway in recent months in accordance with relevant agreement, which helped to maintain an overall ceasefire in northwest Syria," Geng said.

"With regard to the recent air strikes against the Syrian government-controlled areas, the party concerned is called upon to exercise restraint and take no more such actions," he said.

Geng reiterated that unilateral sanctions against Syria must be lifted immediately.

"Unilateral sanctions have seriously undermined the livelihoods of the Syrian people and caused great harm to innocent civilians, especially women and children," he said.

"We urge relevant countries to heed the repeated appeals by the secretary-general and his special envoy. Instead of imposing new illegal sanctions, those countries should immediately lift existing unilateral sanctions against Syria and take concrete actions to improve the humanitarian situation on the ground," he said.

Geng told the council that China attaches great importance to the humanitarian situation in Syria and sympathizes with the sufferings of the Syrian people.

"We have provided, through bilateral and multilateral channels, a large amount of humanitarian assistance, including medical supplies to combat COVID-19 to people in Syria and refugees outside the country," he said.

"China will continue to support and assist the Syrian people according to what they need," he added.

Geng insisted that more efforts should be made to help Syria with economic reconstruction.

"This is the urgent need of the Syrian people, and the foundation for sustainable development and durable peace in Syria," he said, adding that the international community should support the reconstruction efforts of the Syrian government and Syrian people, and help them rebuild and recover as soon as possible in areas that have suitable conditions.

"China will undoubtedly make its contribution in this regard," he said.