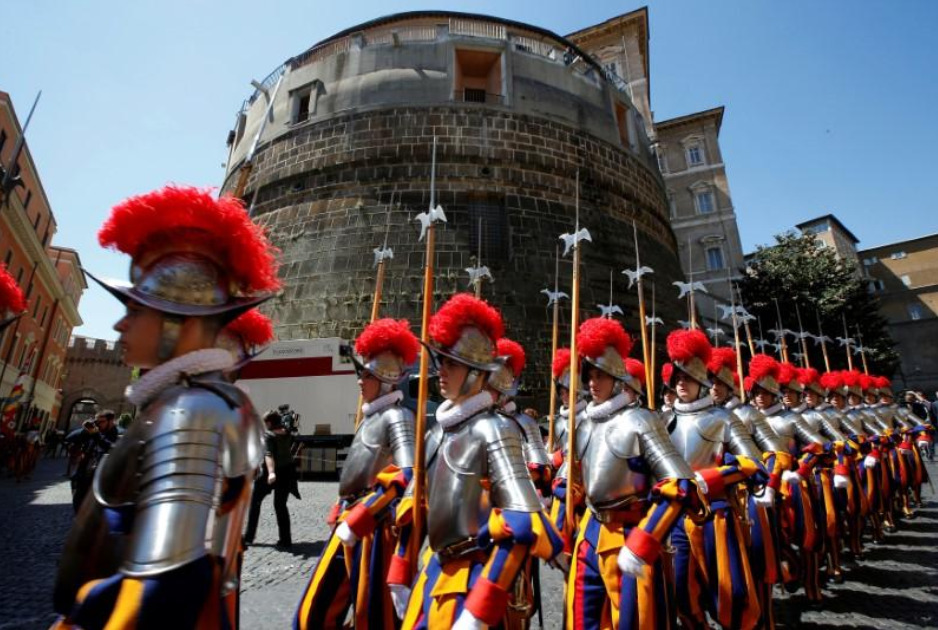 New recruits of the Vatican's elite Swiss Guard march in front of the tower of the Institute for Works of Religion (IOR) during the swearing-in ceremony at the Vatican May 6, 2014 (Photo: Reuters)

The trial of a former head of the Vatican bank and an Italian lawyer on charges of money laundering and embezzlement began on Wednesday with the court hearing of missing documents and secret funds in Switzerland.

Angelo Caloia, 79, the highest ranking Holy See financial official to stand trial, was the sole defendant in the tiny court room, which has both a crucifix and a picture of Pope Francis on its walls.

The other, Gabriele Liuzzo, 95, who once worked as an outside legal consultant for the bank, could not attend the trial, which is being held inside the Vatican under its own legal system, because of poor health, his lawyers said.

They are suspected of embezzling money while managing the sale of 29 buildings sold by the Vatican bank to mainly Italian buyers.

The bank, whose official name is the Institute for Works of Religion (IOR), is seeking damages resulting from the alleged siphoning off of an estimated 57 million euros from the sale of real estate holdings in Italy between 2001 and 2008.

In 2014, the Vatican’s top prosecutor, Gian Piero Milano, who was present in the court on Wednesday, froze millions of dollars in accounts held by the three men.

Milano said on Wednesday that since the original freezing of the three men’s accounts at the IOR, 10 million euros of suspect funds belonging to Liuzzo were found in a Swiss bank and frozen by authorities there at the Vatican’s request.

The IOR’s lawyer, Alessandro Benedetti, said that preliminary contracts involving the deals could not be found.

In Italy, real estate sales involve a two-step process, a preliminary contract known as a “compromesso” sets the price, followed by the definitive deed of sale. Both are supposed to kept on file.

The prosecution alleges that the men regularly under-represented the proceeds from the sales in the IOR books, pocketing the difference between the actual price and the amount officially recorded.

Some of the pocketed proceeds were deposited into their IOR accounts as well as a Rome bank account that was not registered on the IOR’s balance sheet, according to the prosecution.

The president of the three-judge panel, Paolo Papanti-Pelletier, accepted a defense request that an independent audit of the real estate deals commissioned by IOR in 2013 and which sparked the investigation be translated into Italian from the original English.

Ernst von Freyberg, a German businessman, who headed the bank in 2013, ordered the audit by the US- based Promontory Financial Group after noting suspicious accounting procedures under previous administrations.

The chief judge also agreed to a defense request to appoint an expert to make a new appraisal of the real estate. The date for the next hearing will be set after both the appraisal and translation are ready and after agreement on a list of witnesses. Several cardinals are expected to be called.

Freyberg, who was president until 2014, began an overhaul of the bank, which for decades was embroiled in numerous financial scandals.

Thousands of accounts were closed and last year Italy put the Vatican on its “white list” of states with cooperative financial institutions, ending years of mistrust and providing an endorsement of efforts by Pope Francis to clean up finances.