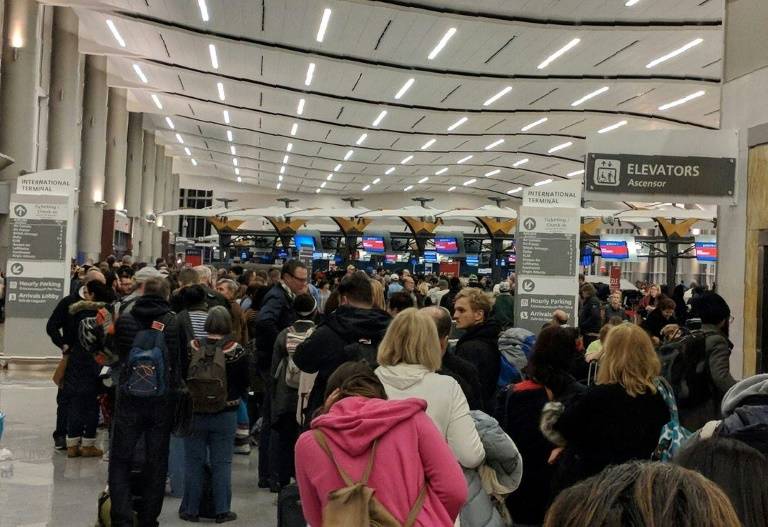 This picture obtained on the Twitter account of Mike Vizdos and taken on December 17, 2017 shows passengers waiting in the terminal of the Atlanta Hartsfield-Jackson airport in Atlanta, Georgia Photo: AFP

The world's busiest airport in the US city of Atlanta was slowly resuming normal operations Monday after a power cut stranded thousands of passengers and unleashed a storm of criticism.

With electricity out for about 11 hours, some passengers were unable to disembark from their planes after landing, while those already inside the terminal crowded the darkened concourses where even some water fountains had reportedly stopped working.

"We all understand that Snafus happen and most of the folks down here are doing their jobs to the best of their ability," tweeted Anthony Foxx, a former transportation secretary under president Barack Obama who was stranded for several hours in his plane.

"But, whatever the cause, it feels like this one was compounded by confusion and poor communication."

US carrier Delta, whose largest hub is in the southern city, said it expected 300 more flight cancellations on Monday, mostly morning arrivals, "to give the operation there an opportunity to more quickly return to normal."

Delta said it had to scrap about 900 flights on Sunday but expected its Atlanta schedule would return to normal by Monday afternoon.

Another carrier, Southwest, said it planned on operating a regular Atlanta schedule on Monday after it and all other carriers using the airport were affected by the power cut.

Flightview.com, which tracks air travel data, listed hundreds of flights as delayed, canceled or diverted during the outage, but by Monday morning it also showed an increasing number of on-time departures and arrivals.

The Georgia Power company had earlier issued a statement saying "power had been restored for all essential airport activities including all concourses and flight operations."

It described the outage as "very rare." Although the exact cause is not yet known, Georgia Power said preliminary investigation suggested that a fire damaged cables in the backup power system.

"No personnel or passengers were in danger at any time," the company said.

Atlanta Mayor Kasim Reed issued an apology "to the thousands of passengers whose day has been disrupted," The Atlanta Journal Constitution reported on its website.

Photos and videos from the airport showed people walking or sitting in crowded airport corridors, with windows only partially cutting through the gloom.

A woman said she was waiting in the security line when "they turned off the lights -- a few times they went off, and then finally they shut off completely."

One passenger, Mike Vizdos, told AFP that he and others got trapped on their aircraft because the power went out just as it reached the terminal gate after arriving from Costa Rica

"Sat on the plane for six hours and then cleared customs and immigration," Vizdos said, still hoping to reach his home in Richmond, Virginia.

"There are thousands of stories," he said.

The airport earlier announced that it "sustained a power outage shortly after 1:00 pm today (Sunday)."

That led the Federal Aviation Administration to place a "ground stop" on flights bound for Atlanta, meaning they were held at the airports from which they were to depart.

"The FAA Tower can operate normally, however, departures are delayed because airport equipment in the terminals is not working," it said.

Those stranded were not amused.

"I haven't eaten since 8AM central," one person tweeted.

Others said they were waiting on the tarmac: "Atlanta airport doesn't have power. I'm trapped on the runway, I'm hungry, and slightly buzzed..... Send help!!!"

Some said people were not being permitted to leave the airport, including a mother who tweeted: "My kid is trapped with the others at the Atlanta airport. No one is allowed to leave."