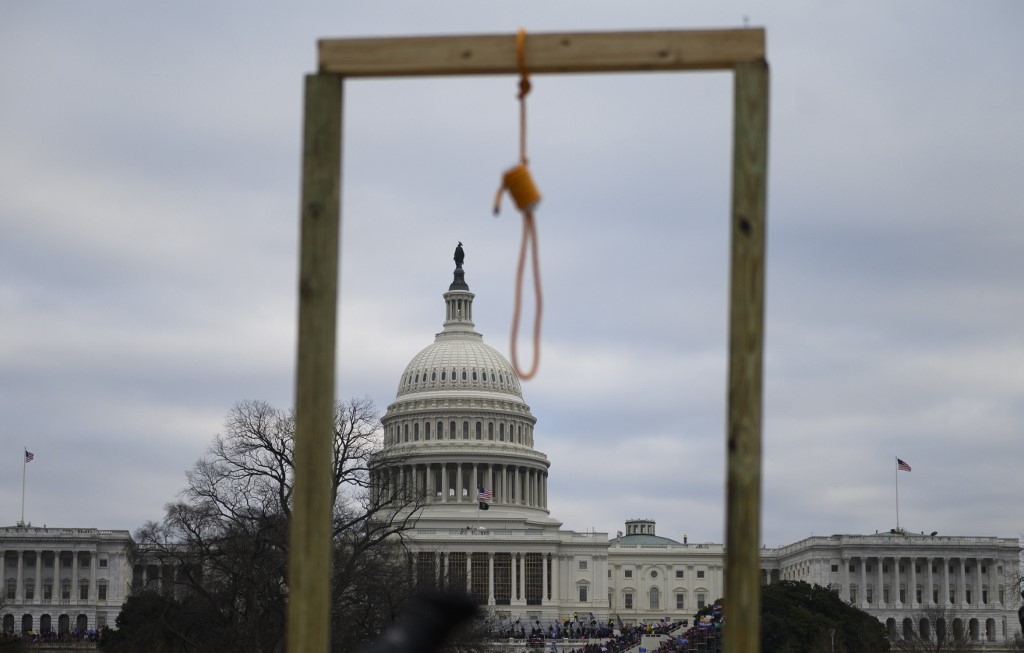 A noose is seen on makeshift gallows as supporters of US President Donald Trump gather on the West side of the US Capitol in Washington DC on January 6, 2021. (Photo: AFP)

GENEVA, Jan. 7 (Xinhua) -- UN High Commissioner for Human Rights Michelle Bachelet on Thursday said that her office is deeply troubled by Wednesday's assault on the U.S. Capitol, noting that the violence showed the destructive impact of hatred by political leaders.

"We are deeply troubled by Wednesday's attack on the U.S. Capitol, which demonstrated clearly the destructive impact of sustained, deliberate distortion of facts, and incitement to violence and hatred by political leaders," she said in a statement issued Thursday evening.

"Allegations of electoral fraud have been invoked to try to undermine the right to political participation. We are encouraged to see that the process has continued in spite of serious attempts to disrupt it," she added.

In her statement, the UN rights chief called on "leaders from across the political spectrum, including the President of the United States, to disavow false and dangerous narratives, and encourage their supporters to do so as well."

She also said that her office noted with dismay the serious threats and destruction of property faced by media professionals on Wednesday, saying that she supports calls from many quarters for a thorough investigation into the events.

On Wednesday afternoon, the U.S. Capitol has witnessed what many called "a dark chapter" in history as protesters stormed into the building, clashed with security officers and forced the evacuation of lawmakers who were having a session to certify President-elect Joe Biden's victory in the 2020 election.

Four people, including a woman shot at the Capitol, died in the clash, according to police.