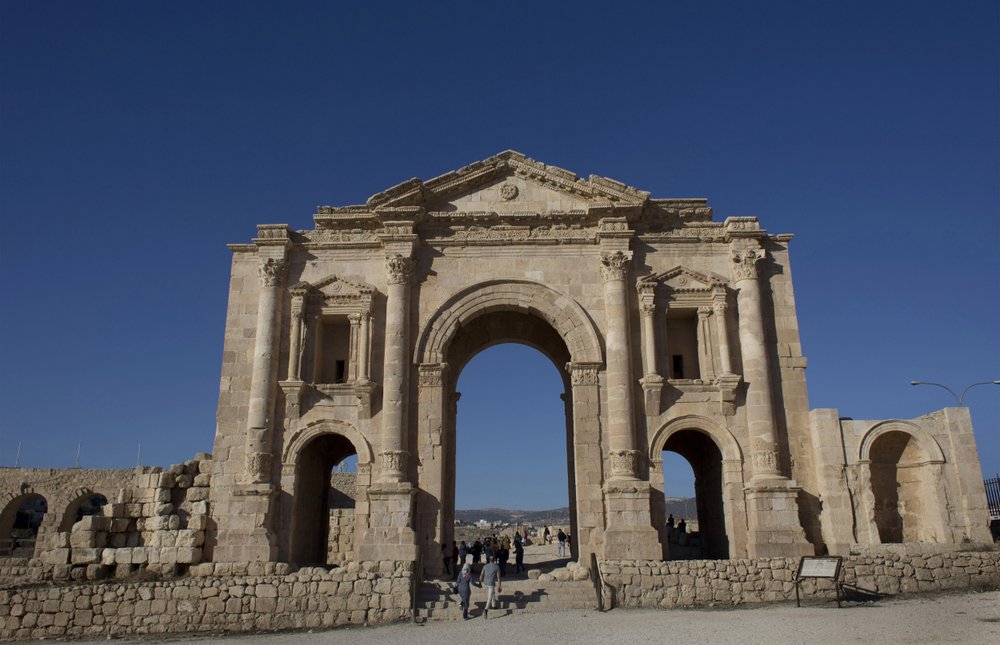 In this Nov. 13, 2015, file photo, tourists pass through the Arch of Hadrian, built during the Roman Empire, and the South Gate of the well preserved Ancient Roman city of Gerasa, in the city of Jerash, Jordan. (Photo: AP)

A young man from a Palestinian refugee camp on Wednesday stabbed eight people, including four foreign tourists and their tour guide, at a popular archaeological site in northern Jordan, security officials said.

The incident in Jerash, one of the country’s most visited destinations, threatened to cast a shadow over the vital tourism industry.

The wounded included three Mexican tourists and a Swiss woman, according to Jordan’s Public Security office. Along with the tour guide, three other Jordanians, including two security officers and a bus driver, were also hurt before the attacker was subdued and arrested.

The office said two people, a Mexican woman and a Jordanian security officer, were in serious condition and airlifted to a hospital in the capital, Amman, by helicopter. Jerash is roughly 60 kilometers (40 miles) north of the capital.

Brent Pelkey, an American tourist who witnessed the stabbing, said the attack came out of nowhere on what appeared to be a normal day.

“I look ahead and I see a guy in a black suit running toward a group of tourists and he doesn’t look like he has the best of intentions,” Pelkey said. “Next thing I see is some tourists running around, some screaming, and the next thing I see is a few on the ground.”

He said he saw a woman bleeding “profusely” from the side of her body. He moved closer and said he saw three other people bleeding on the ground “and obviously in some pretty serious pain” and then another person who looked like a park worker or guide also down.

Jordan’s foreign minister, Ayman Safadi, said he called his Swiss counterpart and Mexico’s deputy foreign minister to tell them the kingdom was providing medical treatment to those “injured in the horrible stabbing crime.” He said he assured them that the investigation was underway.

Later Wednesday, Jordan’s health minister said all of the wounded were in stable condition, and none had life-threatening injuries.

Mexico’s foreign minister, Marcelo Ebrard, tweeted: “The Jordanian government has supported us throughout this.”

Amateur video showed a bloody scene next to the Jerash archaeological site, an ancient city whose ruins include a Roman amphitheater and a columned road.

In one video, a woman can be heard screaming in Spanish. “It’s a dagger, it’s a dagger, there is a knife. Please, help him now!”

One woman is seen lying on the ground, with much blood around her, as someone presses a towel to her back. Another man sits nearby with an apparent leg wound.

The Jordanian army’s website Hala Akhbar identified the attacker as a resident of the nearby Jerash refugee camp who is in his early twenties. The camp, inhabited by Palestinians whose families left the Gaza Strip during the 1967 Mideast war, is one of the poorest areas of Jordan.

There were no immediate details on the man’s motives. But residents of the camp denounced the attack.

“We condemn the terrorist attack that was carried out by a coward in Jerash,” they said in a signed letter quoted on a government newspaper’s website.

Jordan’s economy relies heavily on tourism, and Islamic militant groups and other attackers have in the past targeted tourist sites to embarrass the government or harm the valuable industry. The Jordanian tourism sector has enjoyed a strong rebound over the past two years.

In 2005, triple hotel attacks killed at least 23 people, while the following year a British tourist was killed when a gunman opened fire at Roman ruins in Amman.

More recently, a 2016 attack by the Islamic State group killed 14 people, including a Canadian tourist.