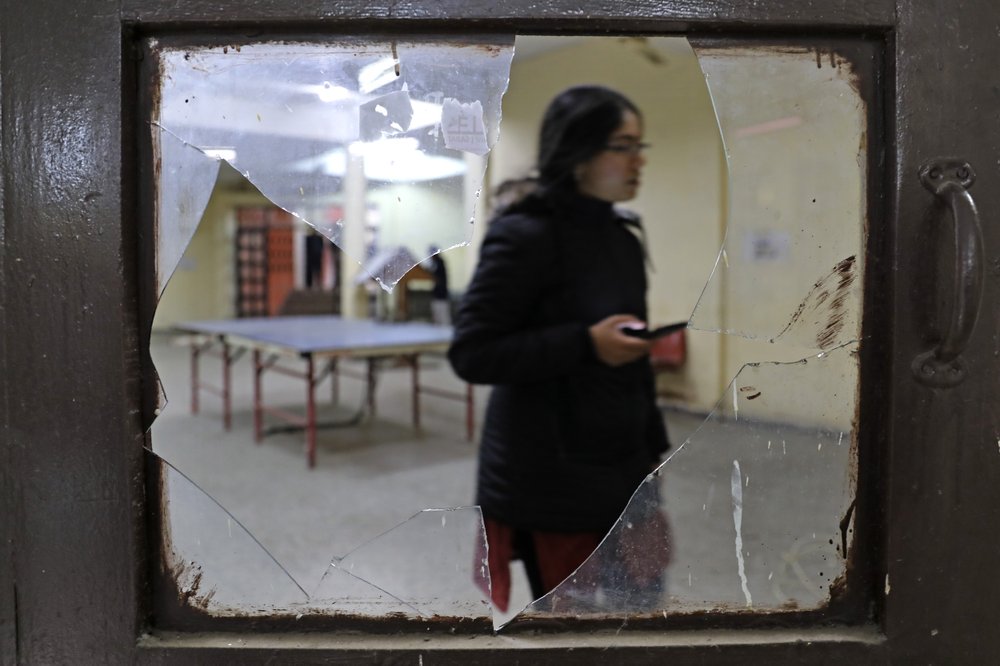 A student is seen through broken glass as she walks inside the hostel canteen room vandalized after Sunday's assault by masked assailants at the Jawaharlal Nehru University in New Delhi, India, Monday, Jan. 6, 2020. (Photo: AP)

Masked assailants beat students and teachers with sticks on the campus of a prestigious university in India’s capital, injuring more than 20 people in an attack opposition lawmakers are trying to link to the government.

Videos that emerged after the assault late Sunday showed people in masks roaming inside the corridors of Jawaharlal Nehru University and beating students who were protesting against a fee hike.

Most of the injured were treated at a hospital for cuts and bruises, said Aarti Vij, a spokeswoman at the All India Institute of Medical Sciences.

“The fascists in control of our nation are afraid of the voices of our brave students. Today’s violence in JNU is a reflection of that fear,” tweeted Rahul Gandhi, a leading politician from the main opposition Congress party.

Communist-linked student organizations at the university have led recurring protests against the fee increase, which went into effect in November. Opponents say the fee hike makes education too expensive for many.

The government was quick to condemn the violence.

“Horrifying images from JNU — the place I know & remember was one for fierce debates & opinions but never violence. I unequivocally condemn the events of today,” Finance Minister Nirmala Sitharaman, a member of the prime minister’s party, said on Twitter.

Surya Prakash, a 25-year-old Ph.D. student at the university’s Sanskrit school, said he was brutally beaten in his dorm room despite crying out that he is blind.

“They first broke the door and windows of the room and barged inside and hit my head with a rod,” Prakash said.

One floor up from Prakash, above the dorm warden’s residence, students said two Kashmiri Muslim students living in adjacent rooms were targeted. While the attackers used a fire extinguisher to ram one door open, a student climbed over his balcony into the room next door while another jumped onto the ground below, sustaining an injury, according to Mukesh Kumar, a Ph.D. student who lives across the hall.

An ambulance carrying injured people off campus was attacked by a group of men with sticks while police stood by, several bystanders said.

The Associated Press accessed an audio clip and a video recorded by students during the attack in which the apparent assailants could be heard and seen shouting while they smashed windows and asking students to open the doors of their rooms.

The video, which was shot by Jyoti Kumari, a master’s student, shows masked attackers armed with sticks threatening to assault the students who were trying to film the incident. The students in the video were seen screaming when attackers went about damaging the university property.

“We saw the brutal vandalizing at the Jamia university. There they used police to do it and here they have used other forces, the so-called mobs, to do it,” she said, referring to December violence in which police barged inside Jamia Millia Islamia university in New Delhi, tear-gassing protesting students and beating them up.

Hours after Sunday’s attack, students across the country took to the streets to protest the incident. Some gathered outside police headquarters in New Delhi and accused police of inaction.

In Mumbai, students from several educational institutions gathered and demanded that the government act against the assailants.

Students at a university in Uttar Pradesh state held a candlelight march to protest the incident.

Amnesty International said the attack is “not an isolated incident and must be seen amidst the larger pattern of pushback as massive protests continue unabated across the country.”

The violence comes amid simmering anger over the government’s new citizenship law, which has resulted in a series of violent protests and clashes around the country that have left at least two dozen people dead.