Attacks by US extremists lead to push for anti-terror laws 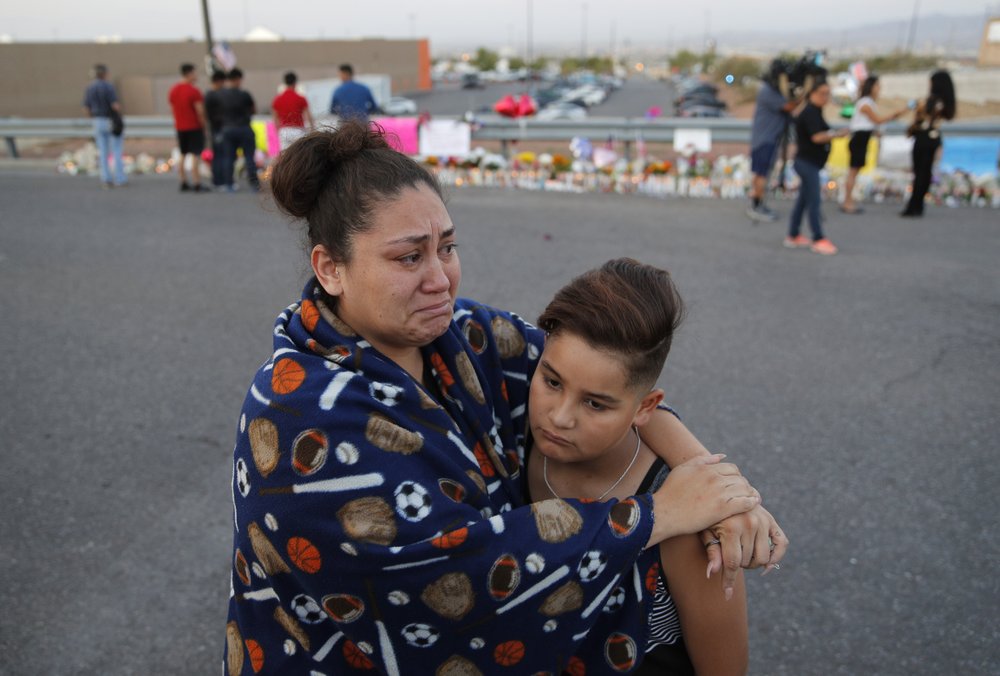 Clarissa Hernandez holds Ezra Magallanes as they speak with the media at a makeshift memorial for victims of a mass shooting at a shopping complex in El Paso, Texas, August 5, 2019.  (Photo: AP)

A white man opens fire at a Walmart in El Paso, Texas, targeting Mexicans and killing 22 people. Another man kills 11 Jewish worshippers at a synagogue in Pittsburgh.

The two mass shootings and a presidential tweet put a spotlight on the idea of “domestic terrorism,” adding momentum to a debate about whether such attacks should be classified and tried in the same way as crimes against America by foreign extremist groups and their supporters. A Republican senator and a Democrat in the House of Representatives are drafting bills to do that while some Republicans call for a left-wing group to be designated a terrorist organization.

“Domestic terrorism is in our backyard and we need to call it and treat it under the law the same as other forms of terrorism,” said U.S. Sen. Martha McSally, an Arizona Republican who intends to introduce legislation when Congress returns in September.

McSally’s proposal would allow federal law enforcement to charge suspects with acts of domestic terror and add punishments for those crimes, including the death penalty.

Rep. Adam Schiff, a California Democrat, introduced legislation on Aug. 16 that he says is a “very high priority.”

“The goal is to put domestic terrorism at the same level of priority as ISIS- or al-Qaida-inspired terrorism, since Americans on American soil now are just as likely, if not more likely, to die at the hand of a domestic terrorist motivated by some hateful ideology like white supremacy,” Schiff said in a telephone interview.

Separately, two Republican senators are calling for an anti-fascist movement known as antifa to be designated as a domestic terrorist organization. The push comes after clashes between white supremacists and antifa in Portland, Oregon, which drew a tweet from President Trump suggesting domestic terrorism designation for antifa but not the white supremacists. Such a designation does not currently exist.

While a push to rethink what should be deemed terrorism gains some momentum, it has sparked concerns about infringement of constitutional rights. It’s also not clear whether the debate will be embraced in a bipartisan way, though McSally said this week that her bill has received “a lot of positive feedback ... from both sides of the aisle.”

Schiff said he hopes for “bipartisan support for an effort to put the full weight of the federal government behind the prosecution of people committing these hateful acts of domestic mass terror.”

Meanwhile, Republican Sen. Ted Cruz of Texas is working on “legal mechanisms” that would enable domestic terrorist organizations to be treated like those on the State Department’s list of foreign extremist groups, his spokeswoman Maria Jeffrey said in an email.

Cruz and Sen. Bill Cassidy, R-Louisiana, introduced a resolution on July 18 condemning antifa, and calling for it to be designated as a domestic terrorist organization.

As antifa activists prepared to square off against far-right demonstrators in Portland, Oregon, on Aug. 17, President Donald Trump tweeted that “major consideration is being given to naming ANTIFA an ‘ORGANIZATION of TERROR.’”

Currently, only foreign groups can be labeled terrorist organizations. The U.S. State Department maintains that list , currently comprising 68 groups — none of which is white supremacist. It is a crime for a person in the United States to knowingly provide “material support or resources” to a foreign terrorist organization.

“I wouldn’t trust this administration to exercise such power in an unbiased and judicious manner,” Merkley said.

The Anti-Defamation League says antifa hasn’t been accused of any murders, and that there is no comparison between the loosely organized movement and the white supremacist groups it sometimes clashes with. Antifa uses “unacceptable tactics” but rejects racism, while white supremacists use more extreme violence to intimidate minorities, the ADL said.

Schiff denounced Trump’s tweet as “a disservice to our efforts to combat domestic mass terror.”

“I see it as the same destructive political posturing we’ve come to expect from the president, that would argue white supremacists’ hate is not the problem, antifa is the problem,” Schiff said.

Mary McCord, who used to lead the Justice Department’s National Security Division, said labeling domestic groups as terrorist organizations would infringe on First Amendment rights such as freedom of expression. Instead, she advocates making domestic terrorism a federal crime, which would enable prosecution for providing material support. Such support could include providing funds, a safe haven or weapons.

The most common international terrorism charge is providing material support, accounting for nearly half of federal terrorism-related prosecutions since Sept. 11, 2001, McCord said.

Schiff said his bill would allow the prosecution of providing material support to a domestic terrorist.

Jeanne Theoharis, a political science professor at Brooklyn College who has written several books on civil rights, worries about such a provision.

“What material support does is allow for going after people whose beliefs and associations are well outside the mainstream,” Theoharis said. “It provides a way for the government to go after people whose politics they don’t like.”