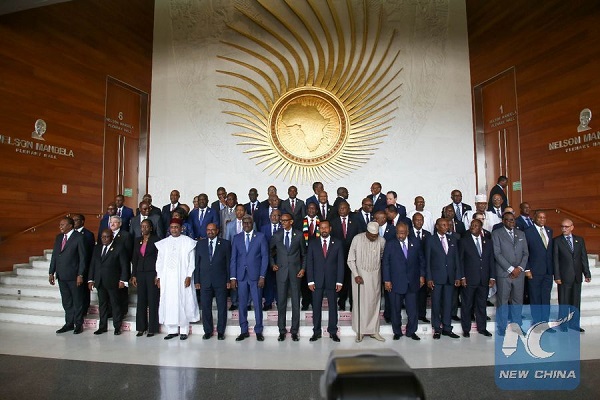 Participants pose for a group photo after the opening session of the 11th Extraordinary Session of the Assembly of the African Union at the AU headquarters in Addis Ababa, capital of Ethiopia, Nov. 17, 2018 (Photo: Xinhua)

The set of sanctions, which include a total suspension of a member state from the AU assembly and other gatherings, was approved at the 11th extraordinary AU summit.

The two-day summit started on Saturday at the AU headquarters in the Ethiopian capital, Addis Ababa.

"Today we have adopted a set of sanctions including a total suspension of a member state that can no longer participate in the meetings of the assembly or any meeting of the African Union," Faki told reporters.

The chairperson stressed that "the first responsibility of a member state is to pay its contribution."

Noting that some member countries are committed to do so while others are presently evaluating "the most flexible way" to make their expected shares, Faki said that the 55-member union "wants to make sure that the payment is being paid on time."

"We can't wait until the end of the financial year for payment to be made; there are sanctions," Faki said.

According to Faki, making payments on time would ensure the sustainability and predictability of the AU's financial sources as well as its operations.

AU member states' contribution to the continental bloc's budget has over the past years increased to 14 percent in 2017, up from just 3 percent in 2012, according to AU figures.

During the two-day AU assembly session, which primarily aimed at advancing the institutional reform of the AU, African leaders considered detailed proposals to make the AU Commission "a more effective and performance-based institution," according to the AU.

The AU's flagship financing proposal, which was approved during the 27th AU Summit in Rwanda in 2016 that directs all member states to implement a 0.2 percent levy on eligible imports from non-AU member countries, is said to be the Union's major initiative to realize its financial autonomy.

The financing proposal aspires to create an equitable and predictable source of financing for the AU and to reduce dependency on partner funds, and cover 100 percent of the AU's operational budget, 75 percent of its program budget and 25 percent of its peace funding.

During the 31st Ordinary Session of the AU Summit in Nouakchott, Mauritania, in July this year, the AU approved a budget of 681.5 million U.S. dollars for the financial year 2019.

The approved budget represents a record 12 percent decrease as compared with those of the previous years.

The 2019 budget, excluding the peace-support operations, expects the contribution from member states to reach 66 percent while 34 percent is projected to be secured from development partners.