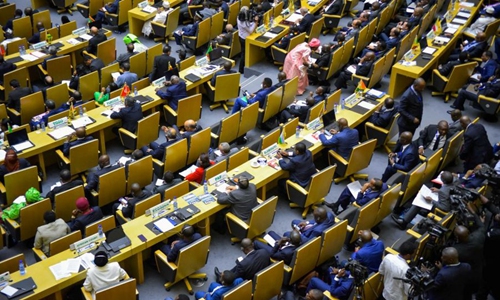 Participants attend the 33rd ordinary session of the assembly of heads of State and Government of the African Union in Addis Ababa, Ethiopia's capital, Feb. 9, 2020. (Xinhua)

African Union chairman Macky Sall said Sunday he was "gravely concerned" by tensions between Rwanda and the Democratic Republic of the Congo as he appealed for calm and dialogue.

"I am gravely concerned about the rise in tension between Rwanda and the DRC," tweeted Sall, the Senegalese president who currently chairs the AU.

"I appeal to the two countries for calm and dialogue for a peaceful resolution of the crisis with the support of regional mechanisms and the African Union."

Rwanda on Saturday said two of its soldiers were being held captive by rebels in the DR Congo, and accused government authorities there of backing the group responsible.

The development came as a diplomatic feud between the two neighbors escalates, with both sides accusing each other of aiding armed militias in the volatile eastern DRC region that borders Rwanda.

On Saturday, RwandAir announced it was cancelling flights to DRC, after Congolese authorities suspended the carrier and summoned Kigali's ambassador over what it alleges is Rwanda's support for M23 rebels.

The Rwanda Defence Force (RDF) later said two soldiers had been kidnapped on patrol and were being held by the Democratic Forces for the Liberation of Rwanda (FDLR), another rebel group active in eastern DRC.

The RDF then appealed to the DRC authorities to work for the release of the soldiers who it said were abducted after an attack earlier in the week along the border by Congolese forces and FDLR rebels.

Kigali had already called for an "urgent investigation" into that incident, which it said involved Congolese forces shelling Rwandan territory and injuring civilians.