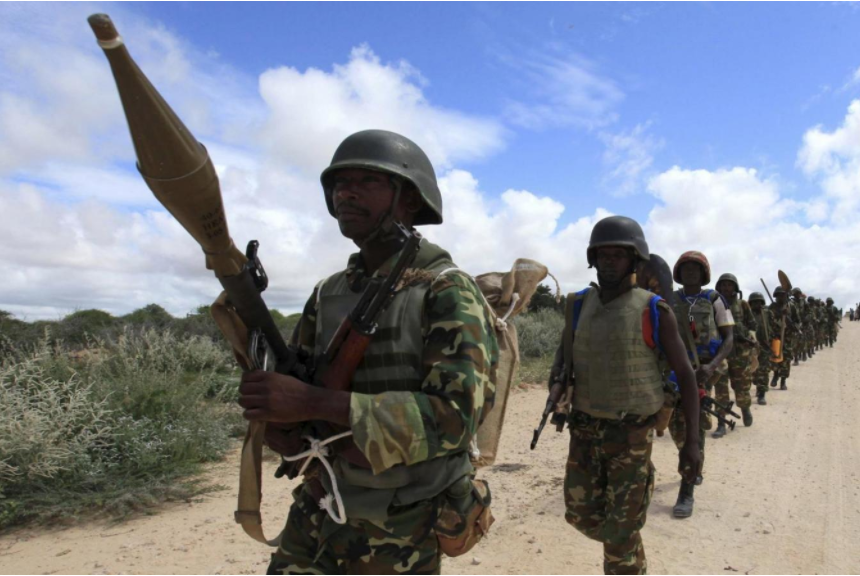 African Union Mission in Somalia (AMISOM) peacekeepers from Burundi patrol on the outskirts of Mogadishu in this May 22, 2012. Photo: REUTERS/Feisal Omar

The African Union peacekeeping mission (AMISOM) forces ended a ten-day training course on Sunday in a move aimed at stepping up efforts to counter widespread use of explosives.

The training for the South West state police officers held in the administrative capital, Baidoa in southern Somalia, focused on prevention and detection of Improvised Explosive Devices (IEDs) which has become the preferred weapon of choice for Al-Shabaab and other militant groups in Somalia.

AMISOM Inspector of Police, Sahr Emmanuel Kobai-Aruna noted in his closing remarks that the training was meant to enhance the capacity of the South West Police Force, adding that the officers were taken through a number of topics on safety and security.

"This is part of AMISOM's mandate to capacitate Somali Police Force and we taught them some components of IED/ Explosive Ordnance Disposal (EOD); the types EOD/IED and other management course modules," said Kobai-Aruna in a statement issued after the training.

"We even taught them first aid at crime scene and casualty awareness assessment," added Kobai-Aruna.

The training course, which reviewed threats, posed by IEDs was aimed at equipping the Somali police with vital skills to detect explosives planted by terrorists.

"The purpose of this course was to create awareness (among) the officers so that they are able to identify IEDs and be able to call upon experts to come and defuse them," Kasale added.

He said the training was also aimed at creating awareness among the general public on the dangers of explosives and how to identify them.

He urged the public to inform security officers whenever they detect or identify an IED, for safe handling and detonation, to prevent loss of life and destruction of property.

Kasale said the AU mission has played a crucial role in establishing the South West State Police Force, by training 600 police officers, who have played a major role in improving security in the region.

In addition, another 600 police officers in Jubbaland have also been trained and plans are underway to recruit and train more officers in HirShabelle state next year.