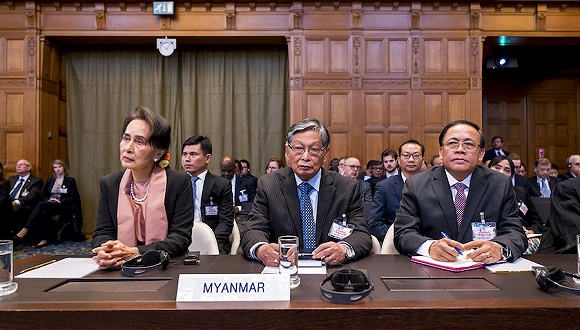 Photo via International Court of Justice

The UN's International Court of Justice has begun hearing arguments about whether the government of Myanmar is responsible for atrocities amounting to genocide against the country's Rohingya Muslim minority.

Myanmar's state councilor, and Nobel Peace Prize laureate, Aung Sung Suu Kyi is appearing at court in the Netherlands for the three-day hearing.

On the first day of proceedings, Suu Kyi listened to the allegations brought forward by the African nation of Gambia, with the support of the 57 members of the Organization of Islamic Cooperation.

"Every day of inaction means that more people are being killed, more women are being ravaged and more children are being burned alive. For what crime?" said Gambian justice minister Abubacarr Tambadou. "Only because they were born different, born of a different race and to a different religion from those who kill and rape them."

Around 100 Rohingya supporters gathered outside on the first day of the hearings, in which Gambia is asking the court to intervene to stop the alleged atrocities in Myanmar's Rakhine State where an estimated 700,000 Rohingya Muslims have fled since 2017.

The Myanmar government has said the military operations were in response to attacks by Rohingya militants and has denied the allegations of mass human rights abuses. A small contingent of government supporters also showed up outside the court. They say the situation has been misrepresented and remain fiercely loyal to Aung Sung Suu Kyi.

"She has always been the human rights champion to us ... to every individual. We believe in her," said one supporter, Moe Moe Hnin. "So that's why we are coming here to support her. She can never do anything wrong."

The court won't actually rule on whether the atrocities occurred, but rather on whether to approve temporary measures to protect the Rohingya.

Suu Kyi is expected to speak on Wednesday and defend the actions of her government and military. For the 1991 Nobel Peace Prize winner, it's a position few would have expected after she entered government following years of house arrest. The world will be watching closely to hear what she has to say.