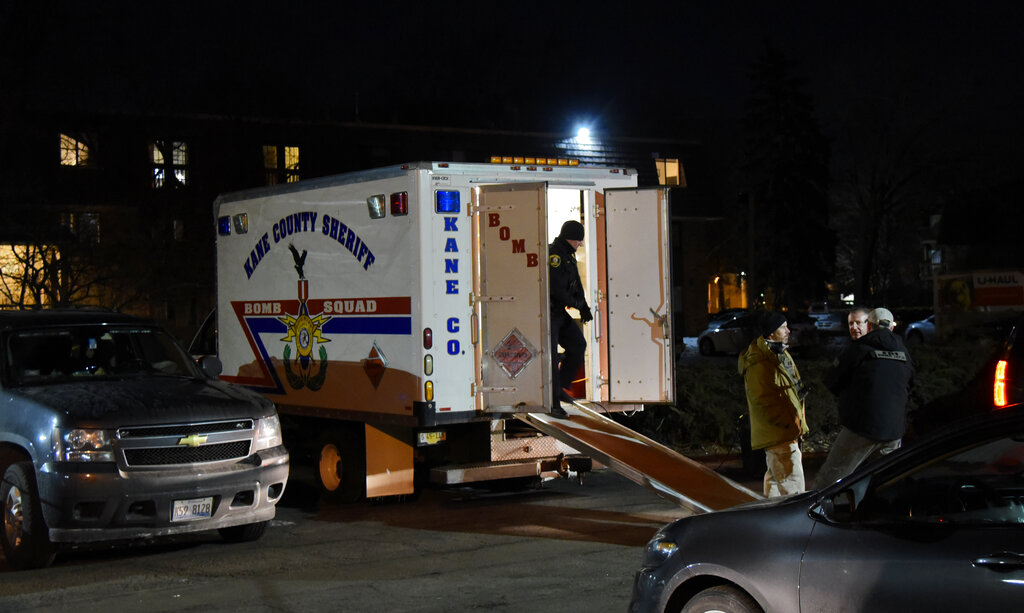 Investigators work at the apartment complex of the alleged shooter from the Henry Pratt Co. on Friday, Feb. 15, 2019, in Aurora, Ill. (Photo: AP)

The victims of a disgruntled employee who opened fire at a suburban Chicago industrial warehouse in the US were co-workers ranging from an intern to the plant manager. A look at the victims:

The 21-year-old Northern Illinois University student was on his first day as an intern in human resources at Henry Pratt Co. in Aurora and attended the fateful meeting where the gunman was fired and then started shooting.

Jay Wehner said his nephew grew up about 30 miles (50 kilometers) south of Aurora in Sheridan and was expected to graduate from Northern Illinois University in May with a degree in human resource management. He was on the dean's list at NIU's business college.

"He always, always was happy," Jay Wehner said. "I have no bad words for him. He was a wonderful person. You can't say anything but nice things about him."

Russ Beyer was shot outside the meeting

Russ Beyer had followed in the footsteps of his father, a previous union chairman who worked at Henry Pratt Co. for four decades. Ted and his 46-year-old son enjoyed camping, fishing and swimming together, usually at Taylorville Lake in central Illinois.

They also shared one more connection: Ted Beyer had also previously vouched for Martin in grievance meetings with management. Beyer remembered Martin as a kind, caring man who brought him coffee and walked with him following back surgery.

But, Beyer said, that doesn't take away the pain of losing Russ, the oldest of three children, who also had two adult children of his own.

"Anybody who knew him knew he had a big heart," Ted Beyer said of his son. "I just recently lost my sister and now this and, you know, it hurts. It's just like somebody reached in there and took your heart out."

The 32-year-old from Elgin, about 20 miles (32 kilometers) north of Aurora, had just joined Henry Pratt in November 2018 as HR manager responsible for operations in Aurora, Illinois, Hammond, Indiana and Denver, the company said. He also was in the meeting where the gunman was being fired from his job.

Parks was married and had an infant son Axel, according to a Facebook post by his wife Abby.

"Every time I've closed my eyes over the last twelve hours, I've opened them hoping to wake from a terrible dream, but that's not the case," Abby posted. "I'm living my worst nightmare. My husband, my love, my best friend."

Parks was a 2014 graduate of the Northern Illinois University College of Business.

Neighbors remembered Vicente Juarez as a hard-working grandfather and rock of his tight-knit family.

Juarez was shot outside the meeting where the gunman was being fired from his job. Juarez had been employed at Henry Pratt since 2006 and was a member of the shipping and warehouse team in Aurora. He had held several other jobs previously in the warehouse, the company said.

The Chicago Tribune reported that Juarez lived with his wife, adult daughter and four grandchildren in a subdivision in Oswego, about 6 miles (10 kilometers) south of Aurora

Relatives declined comment, saying they appreciate the support but are still dealing with the shock. Neighbor Julie Zigman called Juarez "the patriarch of the family" and said "everyone looked to him."

Neighbor Joven Ang said anytime he was working outside Juarez asked him if he needed help. "That's the kind of person he was," Ang said.

A native of Alabama, Pinkard became plant manager at Henry Pratt in the spring of 2018. He was also in the meeting with the gunman.

The company said Pinkard, 37, joined the parent company 13 years ago at its Albertville, Alabama facility.

The father of three earned a bachelor's degree in industrial engineering from Mississippi State University and a master's degree from University of Arkansas, according to his LinkedIn account.

"He loved God, his family and Mississippi State sports," a cousin wrote in a text to the Chicago Tribune that he said was written on behalf of Pinkard's wife, Terra.