A new Australian government regime tightening regulations on foreign investment , though not explicitly aiming at Chinese investments, could further cast a shadow on Chinese investors given Australian officials' recent verbal attacks against China on a wide range issues from Huawei to the COVID-19 pandemic that has plunged the bilateral relationship into a downward spiral, Chinese analysts said. 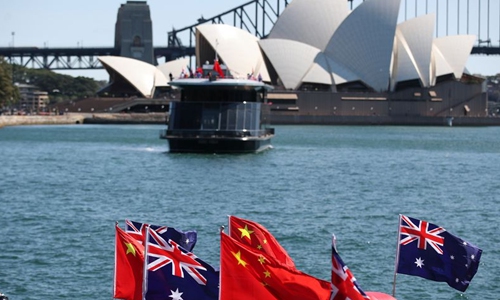 Chinese and Australian national flags are seen at an event in Sydney, Australia, September 8, 2019. (Photo: Xinhua)

The Australian government announced on Friday that foreign investment, both private and state-owned, will be subject to the foreign investment review board's review when they invest in what is termed as a sensitive national security business, including telecommunications, energy, technology and defense-manufacturing firms.

The changes, intended to be legislated this year and enforced from January 1, 2021, will include a new national security test and give the treasurer last-resort powers to force asset sales, according to media reports.

According to Australia's Treasurer Josh Frydenberg, the reforms to Australia's foreign investment framework are the most significant since the establishment of the act in 1975.

Although the Australian government did not name any country, there is a wide belief that they are pointing this at China.

Experts believe the move could cast a shadow on investments from China that have been declining in the past few years and bring about uncertainty to Australia's already battered unemployment rate.

"Chinese investment in Australia's iron ore and other labor-intensive industries has boosted local employment, and this new review will have an impact on jobs and taxes in the country," Bai Ming, a senior research fellow at the Chinese Academy of International Trade and Economic Cooperation told the Global Times.

"As investment from China to Australia continues to decline, this new review that is motivated by political bias may cast a shadow on already deteriorated ties," Bai said.

"It's important as we continue to attract investment on our rules, our terms and our interests that it can be done in a way that it is streamlined and efficient," the Australian Prime Minister Scott Morrison who was also at the meeting said, adding that the Port of Darwin that is leased by a Chinese company must adhere to the new rules.

Though the Australian Prime Minister specifically mentioned a port leased out to Chinese investors, the new move at least on the surface was not targeting Chinese investors, underscoring uneasiness among Australian officials over a potential backlash or even retaliation they could draw from China, analysts said.

The changes could have implications on Australia's relationship with its largest trading partner, China, which has soured this year after Prime Minister Scott Morrison led calls for an independent probe on the origins of the coronavirus in Wuhan, Bloomberg reported on Friday.

However, Chinese investment in Australia has seen a dropping trend as bilateral relations have been shattered.

Since 2015-16, Chinese proposed investment into Australia has shown a downward trend, due to a range of factors, which the Australian side claims to be in connection with China's domestic policy settings that have increased scrutiny over outbound foreign direct investment.

The continuous decline of bilateral investment has to do with the Australian government putting political bias on economic and trade relations, following in the US' footsteps, Bai said.

Nevertheless, as the impact of the measure is likely to affect parts of the industrial chain, one of the biggest hits could be felt in employment in Australia itself, industry analysts said.

China's demand for global supply of resource commodities has led to significant compositional changes in Australia's labor market as workers were absorbed by the rapidly growing mining sector and associated services industries, including accounting, legal and engineering services, according to a report issued on the website of the Reserve Bank of Australia in December 2019.

"Chinese investment in Australia has been declining in recent years, which may remain low this year, especially for large projects, such as telecommunications and power projects," Bai said, noting that these areas often contribute to a fair amount of jobs.

"Employment will not be looking good," Bai said.