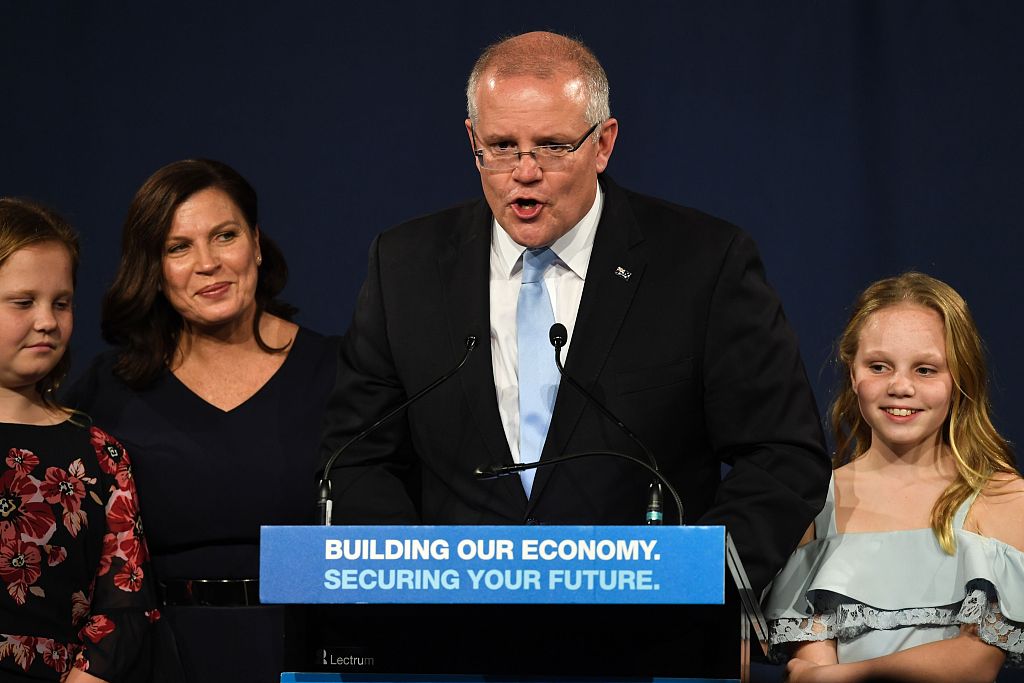 Australia's Prime Minister Scott Morrison (C) gives his victory speech along with his family after winning the Australia's general election in Sydney on May 18, 2019. (Photo: VCG)

Giving his first domestic speech on the economy since being re-elected on May 18, Morrison on Monday told the West Australian Chamber of Commerce and Industry that he and Christian Porter, the minister for industrial relations, will take a "fresh look" at trade unions.

"Another of our priorities is to introduce laws to give greater powers to deal with registered organizations and officials who regularly break the law, prohibit officials who are not fit and proper persons from holding office, and stop the rorting of worker entitlement funds," he said.

"Any changes in this area must be evidence-based, protect the rights and entitlements of workers and have clear gains for the economy and for working Australians."

With Parliament set to return from the election in the first week of July, Morrison is under pressure to legislate his signature tax cuts.

Under the 158-billion-Australian dollar (109.8-billion-U.S. dollar) plan, which was the foundation of Morrison's election campaign, average Australians will pocket an extra up to 1,080 Australia dollars (750.6 U.S. dollars) per year.

However, without the support of the opposition Australian Labor Party (ALP) or Greens, Morrison faces an uphill battle to secure the required support in the Senate.

"Our proposed tax relief doesn't just have a strong political mandate. It has a compelling policy rationale."