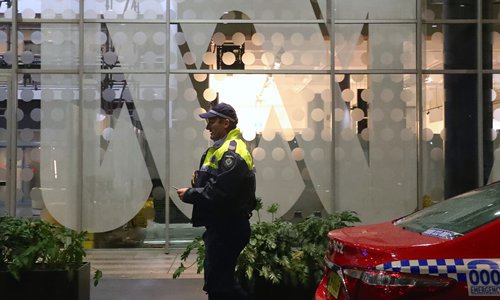 A policeman walks past the ABC logo at the main entrance to the ABC building located at Ultimo in Sydney, New South Wales, Australia, on June 5, 2019. (Photo: IC)

Police in the Australia's state of Victoria were given shoot-to-kill powers on Monday, to stop drivers who deliberately plough into pedestrians.

Eight people have been killed and more than 45 injured in three such attacks in Melbourne, Victoria's state capital and Australia's second-biggest city, since 2017.

Victoria Police said officers will be required to take "decisive action" in response to vehicle attacks, including ramming cars involved or shooting the driver. Deputy Commissioner Shane Patton said officers had wide powers to stop an attack or even the threat of one.

"Any tactical option that currently exists, they can use, but additionally the policy says they can use lethal force," he told reporters in Melbourne.

Though Patton said these were "extreme things to include in a policy," he said giving police clarity on exactly what actions they could take was "very important."

"We don't want to wait until a car ploughs into a group of people, we want them to stop it before it occurs," he said.

The announcement comes ahead of an inquiry into the deaths of six people killed when a driver mowed down shoppers in the heart of Melbourne in January 2017.

It will examine whether police should have prevented the man from getting into the city center for the attack, which left 27 others injured.

James Gargasoulas was jailed for life for the murders, which police determined were "not terror-related."

The new hostile vehicle policy, which comes into force immediately, is the first of its kind in Australia.